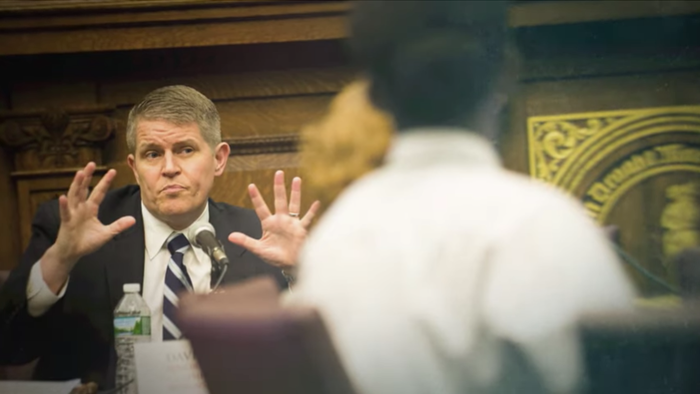 
Authored by Emily Miller via Emily Posts (emphasis ours),

Click here for my most recent article on Biden’s push for Senate Democrats to vote for David Chipman. Then click here for a refresher on what happened during Chipman’s committee hearing (confiscating AR-15s was the highlight!)

Pres. Joe Biden will not withdraw his nominee to run ATF, despite all the Senate Republicans opposing David Chipman. Biden is banking on holding all Democrats and having Vice President Kamala Harris be the deciding vote. The firearms industry is prepared for the worst case scenario.

“If Chipman is the head of ATF, members of the industry will be far less likely to work cooperatively with the bureau,” Larry Keane, who is the top lobbyist in DC for the firearms industry, told me in an interview

Chipman is the Senior Policy Advisor at Giffords Courage to Fight Gun Violence, which was founded by Gabby Giffords and Sen. Mark Kelly (D-AZ). He’s also a member of the advisory board for Mike Bloomberg’s Everytown for Gun Safety. And Biden somehow thinks this appointment to be director of the Bureau of Alcohol, Tobacco and Firearms etc. (ATF) is going to work in reality. Uncle Joe is so wrong.

“When ATF has a zero-tolerance mentality and the place is run by a gun-control lobbyist, retailers are going to think twice before calling ATF to seek guidance or admit a paperwork mistake. Major manufacturers will be less willing to help ATF to train agents and inspectors,” said Keane.

Keane is the Senior Vice President for Government and Public Affairs and General Counsel of the National Shooting Sports (NSSF), which is the firearm industry trade association. The NSSF has taken the lead in DC in trying to stop the Chipman appointment. (If you have my book, look up Keane in the index. He has taught me a lot about the industry through the years.)

I didn’t know what Larry was referencing about the manufacturers cooperating with ATF. He explained that NSSF regularly arranges to have new ATF agents and inspectors tour factories.

“You have these people showing up in the front office of ATF who have the faintest idea how guns are made. How can you regulate an industry you know nothing about? So you offer close up tours to teach the newbies about gun parts and all that stuff so they can learn,“ Keane said. “Our major manufacturers aren’t required to do this. They do it because they are good corporate citizens. But with Chipman, that’s not going to happen anymore.”

Since the Judiciary Committee voted — without Chipman’s ATF personnel files — two more Republicans said they won’t vote in favor: Sens. Mike Braun (R-IN) and Pat Toomey (R-PA), who is usually squishy on guns. Sen. Lisa Murkowski (R-AK) has not said publicly how she would vote but Republican leaders are confident she will be a nay to hold the 50 total.

As Senators, we took an oath to protect Americans’ Constitutional rights – including the right to keep and bear arms. That’s why @SteveDaines and I took to the Senate floor to strongly oppose the nomination of David Chipman to lead the ATF.https://t.co/YtRmbfkZPW

The deciding votes are all moderate Democrats in pro-gun states:  Manchin (WVA), King (ME), Tester (MT), Shaheen (NH) and Sinema (AZ). They will have to decide if they vote on behalf of  their state’s Second Amendment advocates or with their president’s nomination. They are being lobbied hard.

“They are putting an enormous amount of pressure on these senators,” said Keane, who is tracking all the votes. “This could all end if one of the undecided Dems says ‘no.’ But they won’t do that out of deference to the president.”