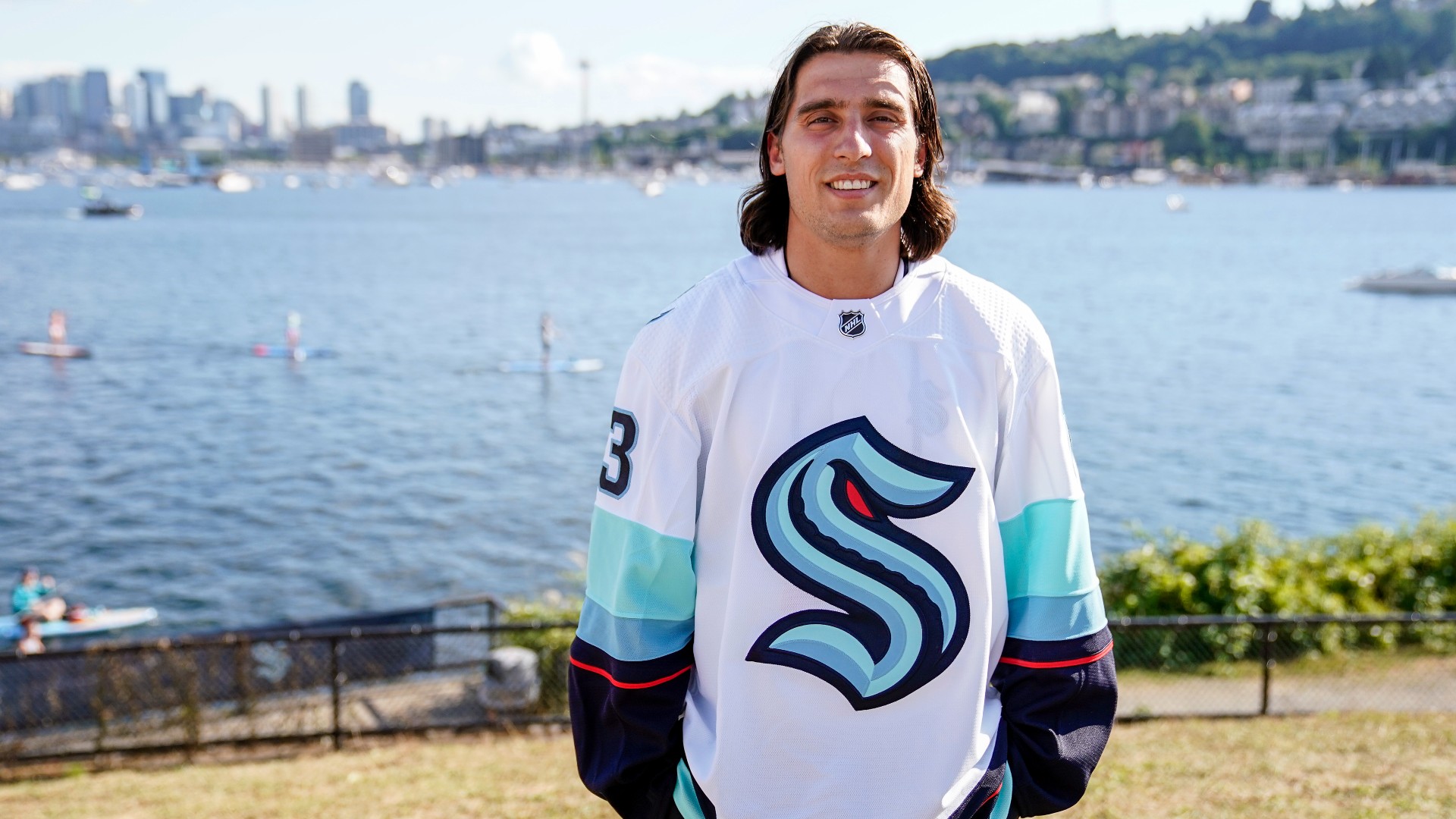 The Seattle Kraken officially unveiled their roster during the 2021 NHL Expansion Draft .

On Wednesday night, general manager Ron Francis, aided by a plethora of big names including women’s basketball star Sue Bird, Shawn Kemp, Gary Payton and Marshawn Lynch, announced the 30 guys taken from your favorite team during a broadcast on ESPN.

The news leaked out earlier in the day, so the names were not a surprise but they did reel in some big fish nonetheless in defensemen Mark Giordano, Adam Larsson, Vince Dunn, Jamie Oleksiak, Brandon Tanev and Jordan Eberle. Giordano, who will surely get the captaincy, was in attendance along with Oleksiak, Tanev, Eberle and goaltender Chris Driedger.

Sporting News tracked the picks and the initial rumors through the Kraken officially announcing the players who are now a part of the NHL’s 32nd franchise.

The Kraken must pick at least 14 forwards, nine defensemen and three goalies. Twenty of the 30 players selected must have contracts for 2021-22 and all contracts must be cap compliant (ceiling is $81.5 million). Also, a quick reminder: the Golden Knights are exempt.

(All times are Eastern)

9:39 p.m. — Side deals and trades were not announced so, sounds like, none were done.

9:25 p.m — Mark Giordano: “This is the first time in my career I’ve ever been drafted.” In all likelihood, he’s the first team captain.

9:02 p.m. — Big tooth-less grin from Jamie Oleksiak when Dominic Moore says he is the heaviest player in the entire NHL.

8:47 p.m. — Brandon Tanev is the Penguins pick and he’s in Seattle. They show his headshot from last year and he’s a good sport about it.

8:32 p.m. — Many thought it’d be Jake Bean but it’s Morgan Geekie who has ties to the area (played for the WHL’s Tri-City Americans) as the Hurricanes’ pick.

8:20 p.m. — Ron Francis says Price was discussed but “decided to go in a different direction.”

8:18 p.m. — Chris Driedger is in Seattle and sporting the new Kraken home jersey.

Dennis Cholowski.
That’s the Seattle selection from Detroit.
Apparently the Kraken were unable to reach him for much of the day.

3 p.m. — Only one team is left. Who was taken from the Red Wings? All signs point to Troy Stecher but based on other picks who knows.

12:31 p.m. — Among the biggest surprises of the expansion draft so far, Seattle opted not to select Max Domi from the Blue Jackets and instead took a 27-year-old defenseman who played nine NHL games in 2020-21.

Told the #CBJ did not make any side deals with #SeaKraken regarding the selection of D Gavin Bayreuther.

12:05 p.m. —  Hurricanes defenseman Jake Bean was the assumed pick from Carolina, but Seattle instead goes with Morgan Geekie.

Another interesting development: A lot of lines were drawn between #Canes and #SeaKraken and who might Ron Francis select from a team who knows so well.

Sounds like the selection will be Morgan Geekie, a player he picked in 2017. @DFOHockey

11:58 a.m. — Seattle’s pick from the Jets could indicate Winnipeg negotiated a side deal to stop the Kraken from taking defenseman Dylan DeMelo.

Winnipeg Jets will lose Mason Appleton to the Kraken.

Belief is they will select Calle Järnkrok instead.

BREAKING – I can confirm that the Seattle Kraken have chosen Calgary Flames captain Mark Giordano as their pick at the Expansion Draft, to be announced this evening.

11:37 a.m. — Seattle has reportedly sourced its goalies from Florida, Washington and Ottawa.

11:33 a.m. — Kaapo Kahkonen was widely speculated to be one of Seattle’s goalie selections.

As of this very moment, I’m getting the impression that the Kraken did NOT take #mnwild goalie Kaapo Kahkonen.

11:30 a.m. — The NHL Expansion Draft has so far been a buzzkill for anyone hoping for chaos. Gabriel Landeskog, a pending UFA, won’t be Seattle’s pick from Colorado.

Know some fans are wondering about this…but hearing SEA did not reach an agreement with Gabriel Landeskog.

His stay was short-lived in Toronto. The #SeaKraken will be selecting Jared McCann from the #Leafs .

The end result: Toronto traded prospect Filip Hallander and a 7th round pick to Pittsburgh to essentially protect their roster from Seattle. @DFOHockey

Subject to change but sounds like the selection from #stlblues will be Vince Dunn. @DFOHockey

According to sources, the Kraken did NOT select Carey Price in the expansion draft. He remains property of the Montreal Canadiens @TSNHockey @TheAthletic

11:07 a.m. — Could Vladimir Tarasenko be at the center of one of today’s biggest side deals?

If the Kraken take Tarasenko from the Blues (and I have no confirmation they will), hearing there are teams that have already told Seattle they would trade for him if the Kraken would retain salary… @TSNHockey @TheAthletic

Early word is #SeaKraken have zeroed in on Brandon Tanev from the #pens .

Kraken already unfolding as tough to play against. With Brandon in the Kraken fold, looking forward to potential Tanev v. Tanev brother matchups in the Pacific. @DFOHockey

9:57 a.m. — Another pending UFA but time is ticking on when things need to be submitted to the NHL.

The Kraken had contract talks with pending UFA Jaden Schwartz but ultimately did not sign him during the window which just closed, source confirms. So the Kraken’s pick will be another Blues player. Dunn? Tarasenko? @TSNHockey @TheAthletic

MORE: Everything you need to know about the Expansion Draft

9:05 a.m. — A little shocking that Larsson is not re-signing with the Oilers who reportedly offered him similar money.

Further to Frank’s reporting, Adam Larsson has a four-year deal with #SeaKraken — hearing it’ll be a $4M AAV.

Seattle locked him during its exclusive UFA/RFA interview period. https://t.co/7HAV5aVD3C

9:42 a.m.. — Any thought of the Kraken taking anyone but Gourde appears to be squashed.

Early word is #SeaKraken were focused in on one player from #GoBolts lot: Yanni Gourde.

Not entirely clear how tonight will work. Teams wondering if he’s the only Tampa player heading to Seattle? Could change. But sense is Gourde will be a Kraken before night is done. @DFOHockey

8:58 a.m. — The first news comes down. If it is in fact Larsson and Oleksiak, they will be the only players Seattle can select from the Oilers and Stars, respectively.

Early word is #SeaKraken are closing in on contracts with two UFA defensemen: Adam Larsson (EDM) and Jamie Oleksiak (DAL).

Not finalized. But barring any last minute change, the expectation is those players will be the selections from #Oilers and #GoStars . @DFOHockey