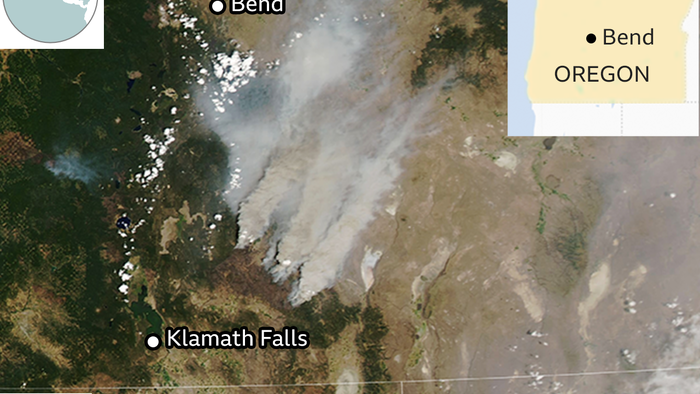 
The Bootleg Fire in Southern Oregon is now one of the largest in the nation and will continue to increase in size as the fire season rolls on.

As of Wednesday morning, nearly 400,000 acres of forest and grasslands have burned. There’s a risk that months of back-to-back heatwaves could increase the fire to as much as 100,000 acres, according to Portland news KOIN. The fire is currently 32% contained.

The fire has been raging for about two weeks. Last Monday, we noted the fire was likely to “double in size.”

Gov. Kate Brown on Tuesday warned the situation could get worse. She said 5,000 firefighters are battling wildfires across the state.

“The good news is there’s a lot of excellent work happening on the ground to protect Oregonians, to protect our homes, and our land,” Brown said.

She conveniently blamed “climate change playing out before our eyes” for the wildfires and, of course, said her administration is working on new legislation for climate action.

“I’ve been very, very clear we are working hard to increase our level of thinning and prescriptive burning to create healthier landscapes,” the governor said.

The Bootleg Fire is so large and intense that it’s creating its only weather.

“The fire is so large and generating so much energy and extreme heat that it’s changing the weather,” said Marcus Kauffman, a spokesman for the state forestry department, NYTimes quoted. “Normally, the weather predicts what the fire will do. In this case, the fire is predicting what the weather will do.”

Local news KATU said Bootleg Fire has merged with the nearby Log Fire.

Across 13 states, 83 large wildfires have burned 1,293,636 acres, according to the National Interagency Fire Center.

The wildfires hitting across the U.S. West have unleashed a massive amount of smoke that is currently transforming blue skies in the Mid-Atlantic and Northeast states into a murky yellow/orange.