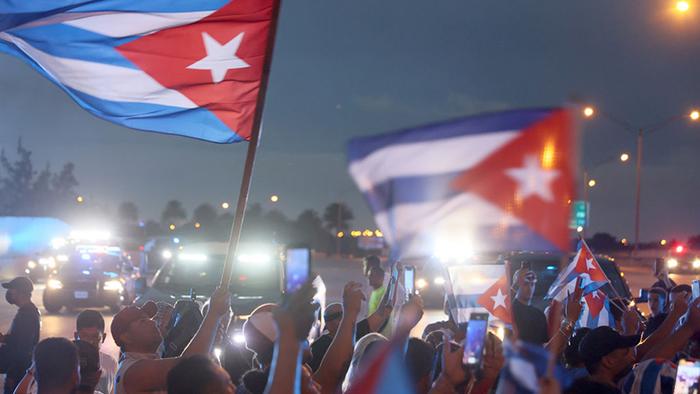 The Black Lives Matter organisation has issued a statement clearly aligning itself with the Marxist government’s brutal oppression of the Cuban people throughout the country, prompting widespread backlash but little surprise given that BLM itself was founded by avid Marxists.

Rather than condemning the Cuban regime, the BLM statement blames the U.S. government under president Trump for “inhumane treatment” of the Cuban people:

The statement claims that “Since 1962, the United States has forced pain and suffering on the people of Cuba by cutting off food, medicine and supplies, costing the tiny island nation an estimated $130 billion.”

It’s the exact same claim that the Marxist Cuban regime is making.

The statement continues, “The people of Cuba are being punished by the U.S. government because the country has maintained its commitment to sovereignty and self-determination. United States leaders have tried to crush this Revolution for decades.”

“Instead of international amity, respect, and goodwill, the U.S. government has only instigated suffering for the country’s 11 million people – of which 4 million are black and brown”, the statement also claims.

The fact that pro-freedom protesters in Cuba are waving U.S. flags has gone completely ignored by the BLM organisation.

Disgusting! Despite the Cuban dictatorship’s murdering and beating of protestors (many of them Black), BLM’s statement on Cuba….condemns the US, praises the Castro regime, and makes no mention of the atrocities being committed by the dictatorship. #SOSCuba #PatriaYVida https://t.co/a9k64eYCcQ

Deplorable this organization has chosen to stand with the oppressive dictators who have murdered and enslaved innocent Cubans of all colors since 1959.

The people responsible for ALL the death and misery in Cuba are the mostly white men who @Blklivesmatter has now embraced. https://t.co/ZCaesaCRcB

So how much of the American establishment last year went to bat for an organization that is quite predictably defending an oppressive communist regime?

“Cubans’ right to choose their own government” has nothing to do with the government that is subject to the embargo.

Mozambique? A Marxist government that persecuted churches, plunged the country into a civil war & made a third of the population refugees? That Mozambique? https://t.co/xiUOLWVxcu

This is inane and whoever wrote it should have to read at least one real book about the Cold War (and not one by Howard Zinn). https://t.co/9OPXU46Y6c

Very revealing that these organizations are releasing statement openly parroting the anti-US talking points of the communist regime that the Cuban people are risking their lives protesting against. https://t.co/nthnZZPfXF

This is a really, *really* bad take. Supporting a dictatorship is the opposite of supporting “Cubans’ right to choose their own government.” https://t.co/bj9VCmMbzn

Assata Shakur is a an FBI Most Wanted Terrorist and cop killer.

The fact that BLM continues to support her should tell you all you need to know about this horrible organization. https://t.co/Wu0ceVVdc2