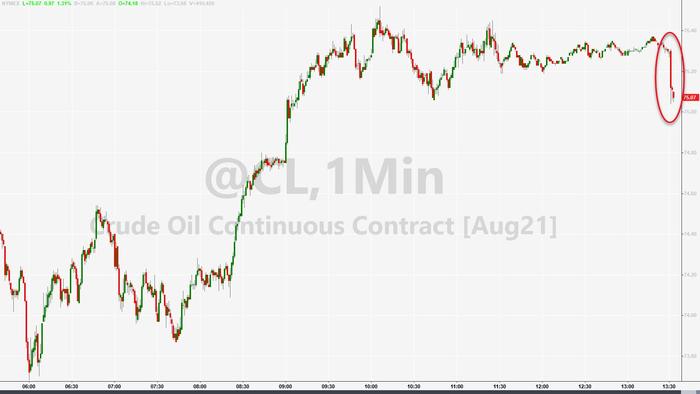 
Despite ongoing uncertainty over US-Iran talks (supply increase), Delta variant fears (demand concerns) and Saudi-UAE (OPEC+) malarkey (cartel breakup fears), oil prices managed gains on the day (to 33-month highs) as IEA said global storage drawdowns in the third quarter were set to be the biggest in at least a decade, citing early June stock draws from the United States, Europe and Japan.

“You’re still not going to have enough crude oil on the market to avoid a supply deficit by the end of the year. That was definitely a tailwind for the market,” said Bob Yawger, director of energy futures at Mizuho.

Analysts expected an 8th straight week of drawdowns in crude stocks but the draw was smaller than expected and less than the prior week. Gasoline stocks also dropped again but far less than last week. Distillates stocks unexpectedly rose…

Oil prices will be volatile, IEA said, until differences are resolved among members of OPEC+.

“Even if OPEC decides to raise output in August, that crude will not reach refineries until after the August peak-demand period will be over,” Ed Morse, head of commodities research at Citigroup Inc., said in an email.