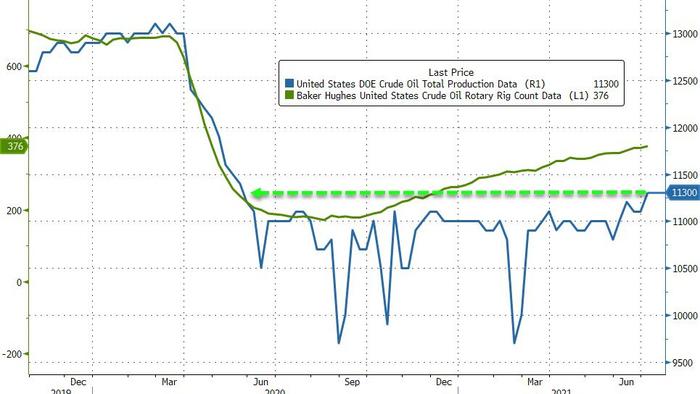 
Oil prices are down for the 3rd straight day as ‘Delta’-variant (demand) fears combine with OPEC+ cartel collapse fears as the Saudis and UAE continue their game of chicken (and see prices fall in the face of their hopes).

“Obviously, the standoff between the UAE and OPEC continues, and we don’t know whether that’s going to be bullish or bearish,” he said.

After API’s report, expectations remain for a seventh straight weekly draw in crude stocks, so all eyes will be on any cracks in the recovery narrative in the official inventory/production/demand data.

As of right now, the moving average for gasoline demand topped 10 million b/d, putting the nation about 94% of where demand was in 2019.

US crude production has remained notably disciplined as prices and rig counts have risen, but this last week saw it begin to accelerate (up 200k b/d last week to 11.3mm b/d) -the highest since May 2020…

“With the non-agreement, the supply side of the oil equation has been thrown into chaos,” said Tamas Varga, an analyst at PVM Oil Associates Ltd. in London.

“Discord, let alone an output war, within OPEC+ will not be well received by the market.”

Bloomberg’s Eddie van der Walt simplifies things well, noting that traders are probably right in following a chain of logic which runs something like:

(2) The function of a cartel is to drive prices higher

(3) Thus, anything that undermines its unity should lead to lower prices

Now, obviously, this is a gross simplification, and there are many disagreements that may lead to OPEC+ pumping less, not more. But that a key player was willing to walk away rather than work with its current baseline, seems like a recipe for more future supply, not less.