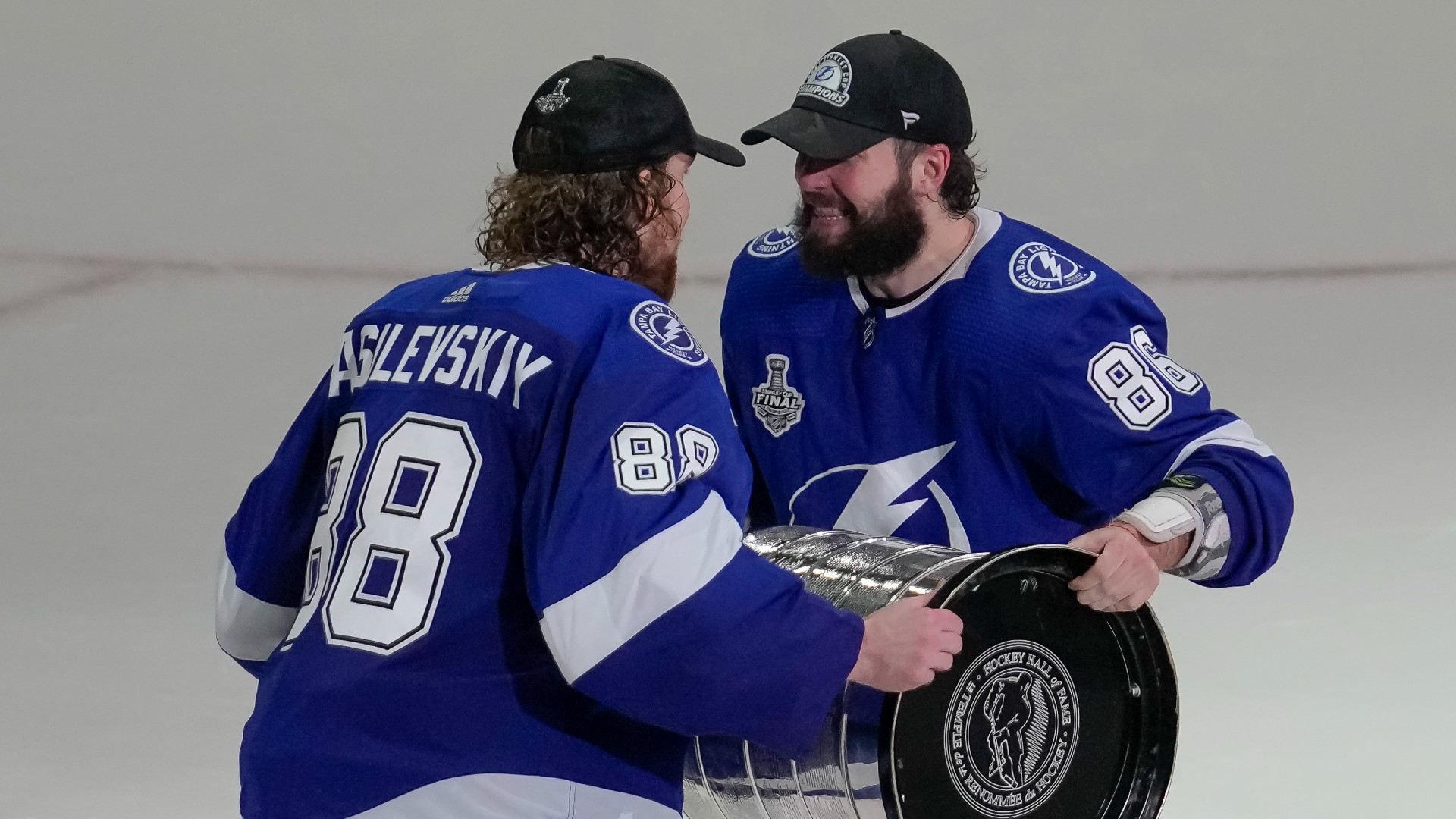 Nikita Kucherov stepped up to the microphone early Wednesday to speak to the media via Zoom after the Lightning beat Montreal for its second consecutive Stanley Cup. Shirtless and slugging a beer, Kucherov did not hold back on a number of topics that he said he kept inside the entire 2020-21 season.

He was asked to describe his emotions to start the presser and, well, he did just that.

“I don’t know what to say. F—ing. Back-to-back. I couldn’t sleep for three nights, you know, and to be able to win this game is huge,” he said before going on a rant about his goaltender Andrei Vasilevskiy, who won the Conn Smythe Trophy as the playoffs MVP.

“Vasy was outstanding. MVP. I was telling him every day: ‘Vasy, you’re MVP. You’re the best player,’ and then they give (the Vezina to) whatever the guy in Vegas division (Marc-Andre Fleury) and then last year they gave Vezina to somebody else (Connor Hellebuyck).

“Vasy took both Cups, you know, he took MVP and I was keep telling him he’s an MVP. He’s the guy that, f—ing he’s the best. He stood on his head today. He kept us in the game and another shoutout by him. Remarkable. Can’t even tell more.”

Well, he did. Then he ripped Canadiens fans.

Kucherov missed the entire regular season following offseason hip surgery. In the postseason, he led the way with 32 points (eight goals and 24 assists). The Russian forward also led the playoffs in scoring in 2020, joining Wayne Gretzky, Guy Lafleur, Mario Lemieux, Rick MacLeish and Phil Esposito as players to achieve the feat in consecutive postseasons (he had 34 points in 25 games last year).

But all he could do was gush about his captain Steven Stamkos.

“He was amazing,” he said. “Like I love Stammer. He’s one of the best. So funny too. He says something I’m laughing. It’s not very funny, but I’m laughing. He’s funny to me. He’s got good sense of humor.”

Asked a follow-up on Vasilevskiy, Kucherov noted that the quiet netminder is humble, and basically tells him to shut up about him being the best.

“He keeps working even though, like, he’s getting robbed every year by NHL, not getting the Vezina. He is still humble. He still works hard,” Kucherov said. Vasilevskiy did win the Vezina in 2019 and has been a finalist three other years (2018, ’20 and ’21). “If he would play a different market, he would take the Vezina year after year. He would beat all the records wherever blah blah blah. He’s the best but he’s very humble.”

Closing out his presser, after showing love for his teammates, he showered the same appreciation to fans who packed Amelie Stadium for the series clincher. Last year the team won the Cup in the fanless Edmonton bubble.

“It was definitely special to see everybody. We had a full crowd today? Didn’t we? Unbelievable. They were so loud. They were unbelievable. And to win in front of them it’s so special,” he said. “Everybody’s going to remember for the rest of their lives this moment.

“Come on, our fans are the best and I don’t know what to say. It was special.”