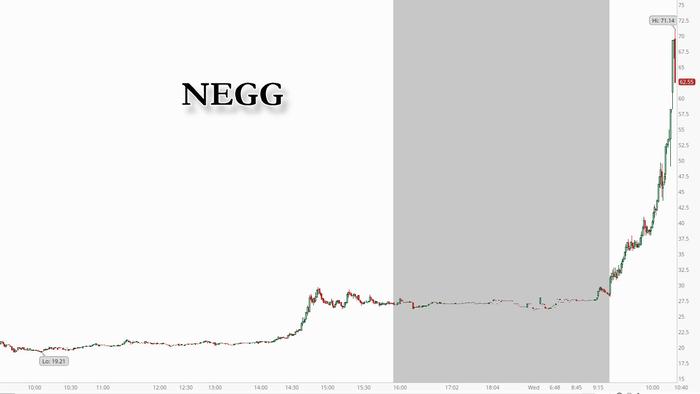 
With Gamestop and AMC both sliding, and the rest of the meme stocks failing to catch a bid, those wondering where the WallStreetBets crowd is focusing its attention today should look no further than Newegg Commerce (NEGG) which soared by 155% just minutes after the open, before being halted.

Today’s move comes after the company surging as much as 55% on Tuesday its highest level since 2015. The stock was trading around $10 just a week ago.

Newegg is a tech-focused e-commerce company with a market value of more than $20 billion, although that number changes by the minute. The company sells computer components, electronics, entertainment, smart home and gaming products on its online platform. According to some the company is poised to benefit from the ongoing frenzy for crypto-mining video cards.

Perhaps responding to the barrage of traffic on its website as new shareholders tried to find what the company actually does, this morning Newegg issued a press release describing what it does, and noting that Newegg now also offers PC assembly to customers who design their own computers on the Newegg PC Builder: “The Company’s build-to-order (BTO) offering takes advantage of Newegg’s ENIAC in-house computer assembly service to build and deliver fully assembled computers significantly faster than other competitive BTO offerings.”

Curiously, NEGG does not appear – yet – in the list of the 20 most commented tickers on the WSB forum. We expect that to change shortly.

More remarkable is that while the short interest in NEGG is modest at best, it appears that today’s move is a function of a gamma squeeze with the company’s (formerly) out of the money $40 calls expiring next Friday doing most of the work where a surge in volume is forcing the now famous gamma squeeze.