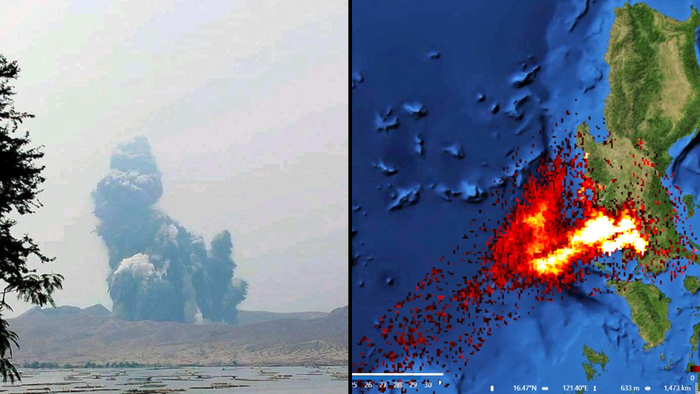 
Philippine authorities have begun to evacuate thousands of people Thursday after the alert status for Taal volcano, located near capital Manila, was raised following a “magmatic intrusion.”

“At 3:16 p.m., the Taal volcano’s main crater generated a short-lived dark phreatomagmatic plume 1 km-high with no accompanying volcanic earthquake,” the Philippine Institute of Volcanology and Seismology said in a statement.

The seismology agency raised the alert level for Taal from 2 to 3 after a .62 mile-high plume of gas and steam was ejected into the atmosphere.

“This means that there is a magmatic intrusion at the main crater that may further drive succeeding eruptions,” the agency warned.

The seismology agency said the towns of Agoncillo and Laurel, situated near Taal, are in possible danger.

Mark Timbal, a spokesman for the government’s disaster-response agency, said thousands of residents have already begun to evacuate from five high-risk villages. He said up to 14,000 people may have to evacuate today.

The magmatic unrest could suggest more activity at Taal is ahead.

Maxine Waters: “To Hell With The Supreme Court! We Will Defy Them!”

“First Real Buying In 3 Weeks”; Goldman Trader Explains Why Friday’s Surge Is The Start Of The Next Big Move Higher

Russia To Transfer Nuclear-Capable Missiles To Belarus “Within Months”: Putin

Two top cryptocurrencies that could make a V-shaped recovery