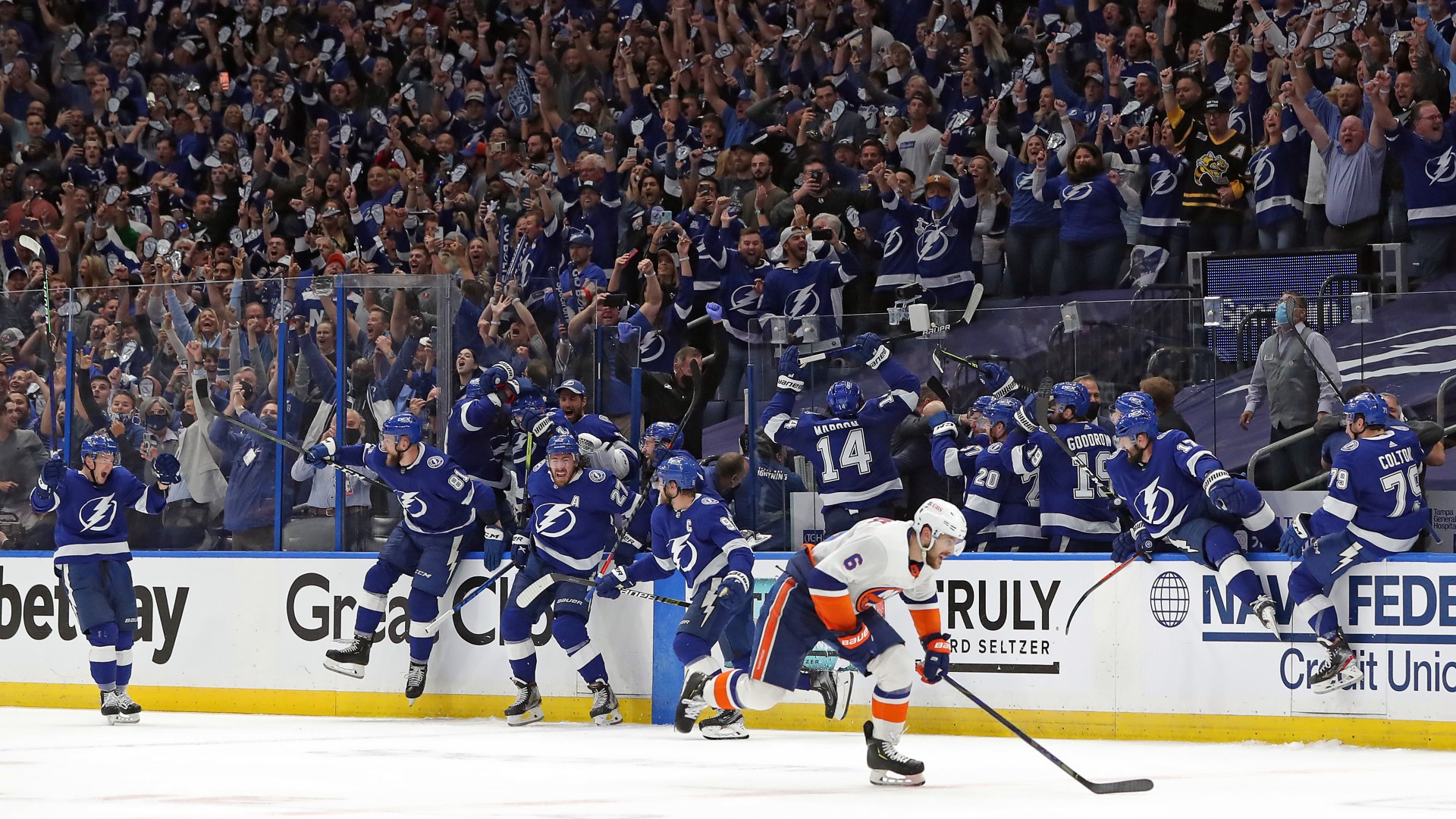 The defending champs are going back to the Stanley Cup Final.

It came down to one game, a decisive Game 7, and in the end, it was the Lightning skating away with a 1-0 win to advance to the 2021 NHL finale. This marks the second straight year they beat the Islanders in the penultimate series. They will now face the Canadiens in a best-of-seven series beginning Monday in Tampa. The winner gets Lord Stanley’s Cup

In a game filled with big hits and strong goaltending on both ends, Yanni Gourde potted the game’s lone goal in the second period while the Lightning were short-handed. He came off the bench, crashed the net and one-timed an Anthony Cirelli feed past Semyon Varlamov from the slot.

Varlamov was spectacular otherwise; he made 30 saves as the Lightning controlled play for the majority of the game. On the other end, Andrei Vasilevskiy continued his domination in series-clinching games with his third shutout of the 2021 postseason and his fourth straight shutout in clinchers dating to a 2-0 victory over the Stars to win the Cup.

The biggest question mark entering the night was whether Nikita Kucherov would suit up. “Not sure,” Lightning coach Jon Cooper said after the morning skate. Kucherov left Game 6 after taking a cross-check from Scott Mayfield on his first shift (he threw a hit on Mat Barzal later in the shift). Kucherov played 16:29 on Friday and recorded two shots and two hits.

Anyone looking at this semifinal series Wednesday morning would have been shocked that it got to this point. The Lightning blew the Islanders out of Amalie Arena 8-0 in Game 5. Two nights later on Wednesday night, the Lightning went up 2-0 before the Islanders, in front of a boisterous home crowd, began to claw back into the game. Jordan Eberle and Scott Mayfield tallied goals to tie it before Anthony Beauvillier notched the game-winner 68 seconds into OT for a 3-2 win. The faithful responded by giving the players a beer shower.

With the win, Tampa Bay continued an impressive streak of not losing two playoff games in a row since 2019, which is also the last time it faced elimination. (Refresher: The 2020 champs were swept by the Blue Jackets in the 2019 postseason lid-lifter.)

With the loss, the Islanders franchise and its fan base have officially said goodbye to their home for the majority of the past 49 years. The team will be moving from Nassau Veterans Memorial Coliseum to its new rink, UBS Arena, next season.

Right now, it’ll be Lightning vs. Canadiens for the hardware.

Sporting News had all the action as the Lightning beat the Islanders for a spot in the Stanley Cup Final (all times Eastern).

10:27 p.m. — One final clear and the Lightning are going back to the Stanley Cup Final.

10:26 p.m. — Amazing effort by Barclay Goodrow to keep the puck deep and kill off some time.

10:22 p.m. — Mathew Barzal with a few chances including a wide-open net but he whiffed on the shot.

#Isles just got their second shot of the third period as they trail Lightning 1-0 with 8:41 left in regulation.

9:59 p.m. — Final 20. Will the Islanders tie it up or are the defending champs going back to the NHL’s finale.

9:34 p.m. — With just under four minutes remaining in the period, the Islanders have just five shots — same as they got on Vasilevskiy in the first period.

9:10 p.m. — Islanders almost tie things up as Beauvillier goes off the pipe.

9:09 p.m. — SH GOAL. Anthony Cirelli feeds it to Yanni Gourde in the slot for the shuffle shot. Gourde came off the bench on a line change and was not picked up.  Lightning lead 1-0.

9:07 p.m. — Islanders head to the power play. Barclay Goodrow called for cross-checking. New York is just 1-for-16 with the man advantage.

8:32 p.m. — Pat Maroon was stirring things up during warmups.

8:29 p.m. — Victor Hedman gets a partial breakaway off a … headman pass. Varlamov with the stop.

8:26 p.m. — Andy Greene with a big-time stop on a Tyler Johnson chance from the slot.

8:18 p.m. — Lightning control play for a good chunk but Anthon Beauvillier gets a burst of speed to split the D but can’t get it past Vasilevskiy. Big right pad stop.