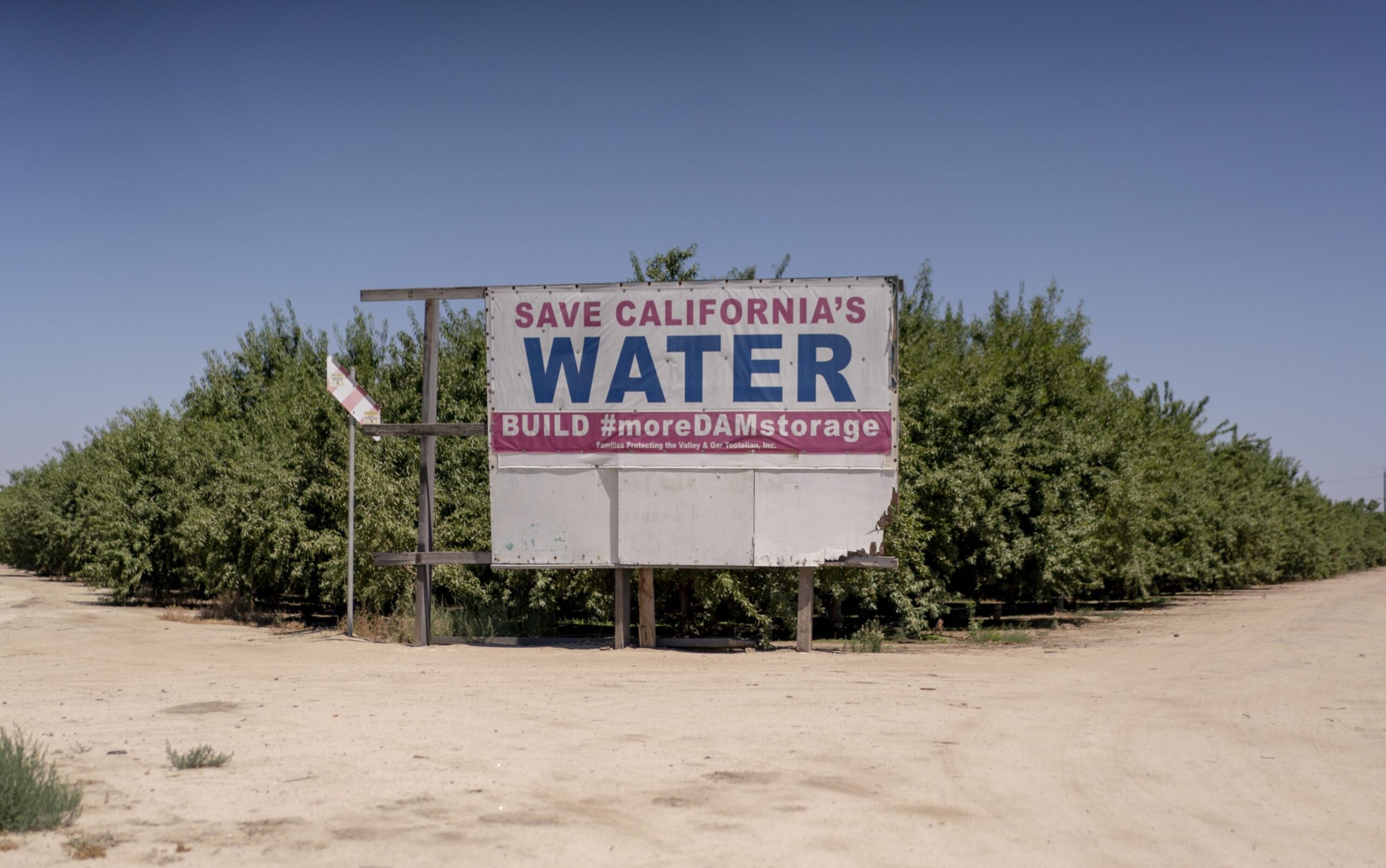 
Sarah Brunner opened the irrigation spigots on her farm in March, three months early. The rain should have still been falling in California. Now that summer is taking hold, she and her husband are considering shifting their meager water supplies into pastures so their animals will have enough to eat.

Brunner’s worries don’t stop at the barnyard. The family’s fields of shallots, garlic and goats are surrounded by thick Northern California forests, dried out and primed to burn. An early season wildfire near her home recently prompted Brunner to document her possessions and reevaluate her fire insurance. “I don’t feel safe anymore. It’s going to hit us hard,” she says. “There’s no doubt about it, we’re going to be inundated with fires. It’s just a matter of time.”

Drought in a habitat shared with bears, cougars and coyotes, all searching for a drink, has a way of compounding the danger. “The animals are going to get more desperate,” Brunner says.

Unstoppable drought is rolling over California and the Western U.S. once again, as it has with little interruption since the new century began. Nearly 98% of land across 11 Western states is abnormally dry, and more than 88% is covered by some category of drought—the worst levels in the U.S. Drought Monitor’s 21-year history. Reservoirs have drained to their bottoms, leaving bath-tub rings on their shorelines. Rivers reduced to trickles are setting off conflicts for dwindling water rights. Millions of acres of trees and shrubs have turned from shade to fuel for the out-of-control blazes everyone predicts will come.

“As far as drought goes, this is the big one, especially if we are talking about the broader drought across the whole Southwest,” says Daniel Swain, a climate scientist at the University of California Los Angeles. “By a lot of metrics, it is the most severe drought on record.”

Last year drought cost the U.S. $4.5 billion, according to the National Centers for Environmental Information, and the dry conditions exacerbated a record wildfire season that cost an additional $16.5 billion. As climate change claws into weather patterns, the U.S. Southwest in particular has become permanently drier.

Arizona and New Mexico missed out on winter precipitation as well as last year’s annual summer monsoon. Lake Mead hit its lowest water level since 1937. Models used by the U.S. Bureau of Reclamation have predicted the Colorado River, in its 22 year of drought, would continue to dwindle along with its reservoirs.

Based on paleohydrology data, this ranks as one of the driest periods of the last 1,200 years, according to Elizabeth Klein, senior counselor to the Department of Interior who testified at Congressional hearing last month.

California endured a six-year drought that ended in 2017, one of the state’s longest and most severe dry spells. Experts warn of worse conditions in the state this summer. “We have never seen drought at the scale and the intensity that we see right now, and it is possible that this may be the baseline for the future,” Klein warns.

Swain terms this process the aridification of the West—a complete shift in the region’s climate. “It is hard to call it drought anymore because it is a permanent state of being,” he says. “Things are moving in one direction rather than going back and forth.”

From June 2020 to May 2021, California posted its driest 12-month period on record, according to the National Centers for Environmental Information. So too did Arizona and Utah, while Idaho, Wyoming, New Mexico, Nevada and North Dakota all placed in the top 10. California just finished its fourth driest spring on record; Washington, Oregon and Idaho their second. Forecasts call for drought to remain locked in across the West, and by August drought conditions could spread into Nebraska and eastern Colorado.

The pressure is mounting on agriculture, which consumes 80% of California’s water. California’s Central Valley alone accounts for 17% of all irrigated land in the U.S. But the problem reaches far beyond the Golden State.

Irrigated farms in the Bureau of Reclamation’s Klamath Project in California and Oregon are facing their worst season since start of the 116-year effort, Dan Keppen, executive director of the Family Farm Alliance, testified to Congress last month. He pointed out that one canal in the project won’t deliver water for the first time since it was built in 1907. The drought is creating conflict between groups who want to save fish stocks and farmers trying to water crops.

Traditional approaches to water and how it is apportioned are based on 20th century norms. “A lot of assumptions are no longer valid,” Swain says. “Even the most pessimistic projections from a few years ago are not pessimistic enough.”

Forecasts say the wildfire threat across the West is running a month ahead of schedule because of dry trees and brush—and that means there’s daily potential for something to spark the flames.

That painful process of adjustment is playing out at the Foggy Bottoms Boys, a mixed crop and dairy farm in the bottoms of the Eel River Valley on California’s northern coast. The operation is “destocking” in anticipation of a drought-caused feed shortage, selling off about 20 out of their 120 cows milking cows and reducing the sheep flock by about half.

The stress brought by years of drought has made cities much better at managing water than they were before the dry years in the prior decade. Californians cut back water use during the last drought, and that conservation ethic has largely persisted. Urban water use is 16% lower now than in 2013, but the level of preparedness is not the same across the state.

“The rest of California is not anywhere near as prepared as Southern California,” says Felicia Marcus, a visiting fellow at Stanford University’s Water in the West program and former chair of the California State Water Resources Control Board. Southern California’s Metropolitan Water District provides water for nearly half the state’s population and has spent more than $3 billion on water storage and conveyance since the late 1990s. Local agencies have also invested more in water recycling, lawn rebates and ongoing conservation. By contrast, the Bay Area lacks a regional body to make broad investments and coordinate conservation plans, though there are efforts to share some facilities.

Water has always been a problem in the American West because the region doesn’t get its water the same way as the East, where periodic rainstorms replenish the landscape. California gets nearly all of its water from rain and snow between November and March, and there are dire consequences if that falls short. California’s snow pack, which was pretty good during the winter of 2020 and 2021 compared to previous years, melted straight into parched ground. “The snow pack just kind of poofed into thin air,” Swain says.

Arizona, New Mexico and parts of Colorado, Nevada and Utah depend on an annual monsoon that starts in July and last a few weeks. The monsoon forecasts range from lackluster to bleak.

Drought is also dimming hydro-electric power across the region. Power capacity at the Hoover Dam dropped about 25%, and California is seeing the lowest levels of hydro-electric output in more than five years. Glen Canyon Dam in Arizona might approach minimum levels beyond which it produces no power, and California’s Lake Oroville could get so shallow it won’t produce power in August and September.

From the early 1900s to the late 1960s, America invested in water storage projects across the West, including the Hoover Dam. These enormous projects now appear built for another climate. For decades federal dam projects all but ground to a halt until the passage of new legislation in 2016 that breathed new life into a series of next-generation projects: California’s Sites Reservoir, the Sacramento Regional Water Bank and storage projects in Washington’s Yakima Basin. A coalition of 220 agriculture and water organizations is now lobbying Congress to spend $49 billion over the next 10 years on repairs for old and crumbing dams, as well as new infrastructure including water recycling and reuse projects.

It’s possible there will be new dams, but these would be built with a new aim: to capture extreme winter flood waters that current dams can’t hold. In 2017, the last big flood year in California, the state’s Department of Water Resources estimated that 48 million acre-feet of water flowed out under the Golden Gate Bridge. That’s more than seven times the amount of water exported by the State Water Project to meet the needs of agricultural in Central Valley and homes Southern California. The Sites Reservoir, once completed, would try to capture up to 1.5 million acre-feet of this winter flow for use in the dry season.

But these projects won’t do anything to shield the West against the upcoming disaster, which promises to get worse with every dry, hot day. Forecasts say the wildfire threat across the West is running a month ahead of schedule because of dry trees and brush—and that means there’s daily potential for something to spark the flames. Last week saw dry lightning warnings pop up across the western U.S., according to the Storm Prediction Center. The air is so dry that rain from thunderstorms evaporates before it hits the ground, leaving lightning to strike parched trees and shrubs.

“We haven’t seen the extreme devastating wildfire yet. But the key word is yet. They are coming,” Swain says. “A lot of what’s alarming right now is what the current conditions tell us where we’re going to be in two or three months.”

Without moisture in the soil, the sun’s energy heats the air. Last week’s heatwave that pushed temperatures to about 115 degrees Fahrenheit throughout the Central Valley, and even higher in Arizona and Nevada, is likely a preview of what lies ahead. “For a lot of parts of the West this is the beginning of the dry season,” Swain says. “This is going to get worse before it gets better.”

Democrat Senator lobbies agencies over the use of crypto in ransomware

Why Does No One Ever Talk About Sweden Anymore?