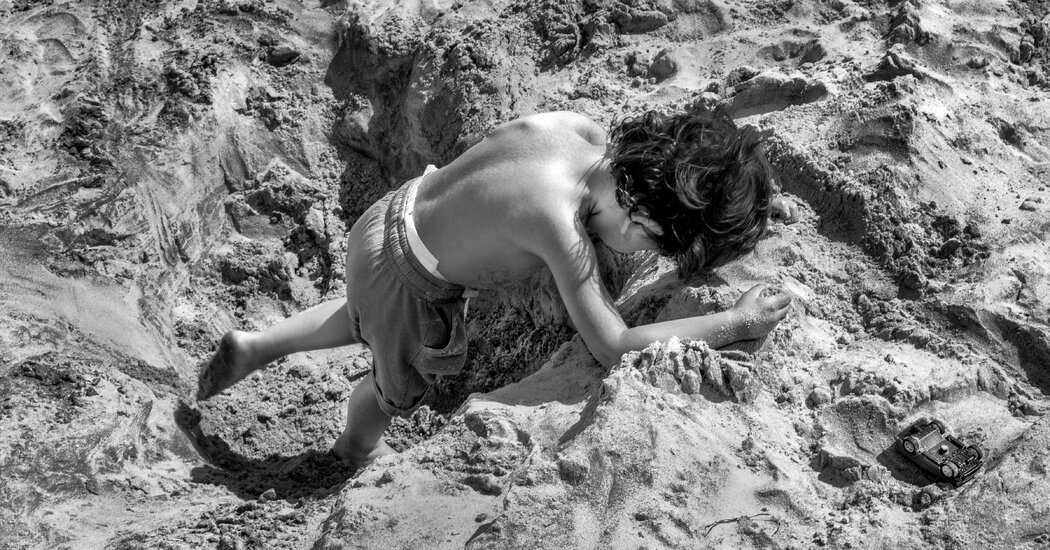 
My older son recently made a vending machine out of a cardboard box. My daughter created clothing for her Barbies out of paper and tape. My baby went through the hall closet, describing the shoes in a babble that was only one-eighth English. All three participate in a steampunk-inspired world of their own creation called Gearton, for which they build castles and a clock tower out of picture books. When their games are going well, the kids are murmuring, saying to one another, “Pretend we …” or “What if we …” or “The queen must be assassinated.” There’s also a lot of screaming. Meanwhile, I’m doing the crossword.

I have three kids under 10 who don’t expect — or even want — to play with me. It took some practice, but over time, we’ve all learned we’re better off doing our own thing: the kids, without stodgy parental interference, and my husband and I, unhooked from the assumption that we have to play to be present.

It wasn’t always this way. As a toddler, if my first child wasn’t digging in the trash or chewing on the couch cushions, he was rampaging through the house with an imaginary weapon. He never listened. He tried to run into traffic. The constant wrangling and vigilance were so exhausting that my husband and I didn’t have the energy to play the way my son preferred — anything that involved full-body contact or pretend violence. Instead, I said no and stop all day long, and when my scolding seeped into the playing, I felt guilty and frustrated. I was a terrible playmate, a tired mother who did little beyond obstructing.

But when my son was about 3, I realized his fictive worlds were vivid enough to continue without me. All he needed, at first, was a listener. After a while, he would head into his bedroom, alone, to transform it into the place that lived in his mind. It was freedom — for all of us. Thus began an experiment with expectation: Little by little, my husband and I would stretch the time our son could safely play by himself.

My daughter was born a year after that. She is shy and moody, and she has been content to play on her own since she could crawl. I’ve never met a more self-​possessed child — she used to tell me when she needed a nap. She has never liked the sorts of games her brother prefers, and play between them has always been a negotiation. The games they’ve created combine his love of fantasy and drama with her need for realism; when they set up their pretend yak farm with pillows and stuffed animals, she enjoys an imagined sunset, while her brother worries about predators who have yet to grace this earthly plane.

I was a terrible playmate, a tired mother who did little beyond obstructing.

In the past, if they couldn’t agree on a game’s direction, I would try to help, only to make it worse: I was a reality-TV host, watching helplessly as my contestants swapped insults at a show reunion. When Mom is there to listen, they turn defensive and mean; when I say, “Figure it out,” they do. I know I’m lucky they have each other to play with, and so I’ve taught myself to hold back. I tell myself they’re learning about compromise and boundaries. As am I. I’m distracted by work (and life). I have a bad temper. I can be critical. And I don’t like to play, especially pretend, or anything with dolls or figures, or any games that ask me to hide or wield a Nerf gun. My motto is “Moms don’t play.” (The other context also applies: I do not play.) Our third child joined the family with this system in place, and he is, as most third children are, remarkably independent.

I can’t say that my approach is right for everyone. I know that it resonates for me in part because of how I was raised. I have no memories of my parents playing with me. I can remember reading together and their swimming with me in the ocean, but they weren’t involved in the fashion shows I filmed with my sisters, and they didn’t help me make my magazine, Kid Stuff, either. Not once did they dine at my fictional restaurant.

This isn’t a complaint; it’s gratitude. They may not be a part of these memories, but they weren’t absent either. They were on the edges — there but not there. My parents allowed me private worlds of my own creation, and they respected them. I imagine they felt the same joy I do when I watch my children playing without me; my daughter opens a bakery as her older brother bounces on a giant rubber ball. The baby fills his garbage truck with blocks. Each of us enters his or her own separate sphere. This, I’ve realized, is my favorite part of mothering. My looking away and then observing.

When my kids and I stop doing our own things and come together, it’s because we want to. The activities we do together offer all of us pleasure; we opt in and because of this, we actually have fun. I may not play, but I’m goofy and affectionate, and I love to talk about feelings. I love to teach too: how to count, how to read, how to make guacamole. It feels good to be with my kids in these specific ways, and to let myself be there. It took some time, but I’ve realized I can’t be every kind of mother. I can only be one. I can only be theirs.

Edan Lepucki is the author of the novels “California” and “Woman No. 17.”