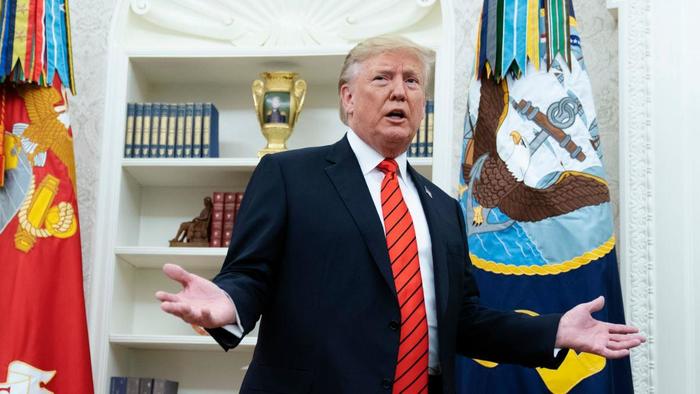 
Former President Trump trolled Democrats this weekend, releasing a list of claims he says he’s been vindicated over.

Statement by Donald J. Trump, 45th President of the United States of America

Have you noticed that they are now admitting I was right about everything they lied about before the election?

Speaking from his Bedminster, New Jersey golf course, Trump said: “‘We were right! Listen to this: Hydroxychloroquine works. The virus came from a Chinese lab – it just came out. Hunter Biden’s laptop was real. They tried to say it was made by Russia. Russia. Russia. Russia.”

“Lafayette Square was not cleared for a photo op. That just came out and I want to thank the Inspector General for having the courage to come out with the truth. The ‘Russian Bounties’ story was fake. Remember that? We produced vaccines before the end of 2020 in record time,” Trump added.

Reads some of his recent vindications. And Mentions your favorite person! pic.twitter.com/R174Dh2GYH

Trump was condemned throughout last year for touting Hydroxychloroquine despite multiple doctors having successfully used it in patients. Last week, preliminary research revealed that the drug can increase survival rates in seriously ill COVID-19 patients by 200%.

How many people have died as a result of the left’s politicized crusade against cheap therapies – including Dr. Anthony Fauci?

Trump was also slammed for suggesting that COVID-19 may have leaked from the Wuhan Institute of Virology – only to have been recently vindicated after bombshell reports in the Wall Street Journal revealed that three lab workers were hospitalized in December 2019 with COVID-like symptoms – adding to the mounting pile of evidence against the institute known for its gain-of-function research on bat coronaviruses.

As the Washington Examiner notes, “a batch of newly released emails from Fauci shows that the doctor was made aware that the virus likely did originate from a lab leak. The emails also show Fauci was aware of a coordinated effort between the World Health Organization and the Chinese government to squash stories about the lab leak hypothesis.”

cover-up” and called for an investigation into him. House Rep. Marjorie Taylor Greene similarly said Fauci and the media intentionally misled the public.

Sen. Lindsey Graham took the emails a step further and claimed that Trump would have won the 2020 presidential election alone if the media reported accurately that the virus came from China.

“If Trump was right [about the lab leak theory], it would have changed the outcome of the 2020 election, I believe,” Graham told Fox News host Sean Hannity on Tuesday. “And if we could have proven that early on in 2020 it was a lab leak coming from China, not occurring naturally, the public would want revenge against China, and who would they turn to: Biden or Trump?”

“If it were known in February that Trump was right [in] 2020, I think he’d be president today,” he said in the interview.

And since nobody else will pat Trump on the back or admit he was right, he might as well take a victory lap.

Maxine Waters: “To Hell With The Supreme Court! We Will Defy Them!”

“First Real Buying In 3 Weeks”; Goldman Trader Explains Why Friday’s Surge Is The Start Of The Next Big Move Higher

Russia To Transfer Nuclear-Capable Missiles To Belarus “Within Months”: Putin

Two top cryptocurrencies that could make a V-shaped recovery