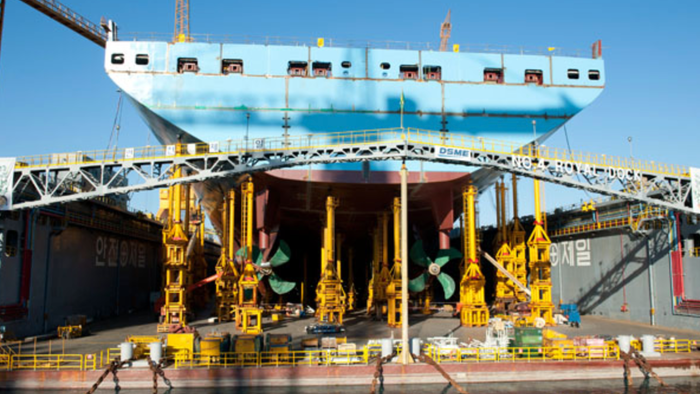 
About a year ago, shipbreaking was in full swing as the global economy was in tatters. After Western economies injected trillions of dollars in fiscal stimulus, supercharging consumers, maritime traffic between the US and China has been off the charts, resulting in shipping lines adding new capacity.

The latest spending patterns in the West show things are getting back to normal as consumers are using credit cards and debit cards (where the stimmy checks arrive) to buy items mostly made overseas. They are highly confident about the future and are spending like there is no tomorrow – triggering supply constraints as supply chains remain tangled from the virus pandemic.

For the first five months of 2021, orders for new container ships doubled all of 2019 and 2020 orders, according to The Wall Street Journal, citing London-based maritime data provider VesselsValue Ltd. Many of the orders were at shipyards in South Korea and China.

Container ship orders have been so strong that some yards are shying away from quotes and or even renegotiating existing orders for vessels as the price of metals, such as steel, has more than doubled this year. Thanks to stimmy checks and remote working, Western consumers have been on a purchasing spree of products from overseas, and major retailers such as Amazon, Walmart, and Target, have struggled to restock as supply disruptions continue to plague the world.

“They are making bucketloads of money, and when that happens, owners invest in new ships,” said Peter Sand, a chief shipping analyst at Denmark-based shipping trade body Bimco. “Orders have doubled so far in 2021, nearly reaching the total tonnage ordered for all of last year. I won’t be surprised if there is another wave of ordering.”

As we’ve noted (see: here & here), container rates have more than doubled on the year and could rocket even higher.

Today’s strong orders for vessels follow the downturn in maritime trade over the last several years, forcing some lines to send aged ships to breaking yards. A typical container ship takes 12-16 months to build; some have turned to used vessels where values have been soaring.

“It’s been our busiest period in years, and it’s very much about container ships,” said a senior executive of South Korea’s Hyundai Heavy Industries Co., the world’s biggest shipbuilding factory in terms of capacity. “The orders are mostly for bigger ships with all the extras to emit less, which is good for margins. We are almost out of slots to build new ships until late 2023.”

“I’ve never seen such demand in 20 years,” this executive said.

While ship orders surge as lines are rushing to add capacity, the slowdown in China’s credit impulse is an ominous sign that a global upswing could be fading.

We urged readers to go over some of our big level (and correct) observations laid out last December in “In Historic Reversal, China’s Credit Impulse Just Peaked: What This Means For Global Markets,” the latest Chinese credit data means a slowdown in the global economy could materialize later this year or in 2022.

One final reminder: the credit impulse first reaches assets that are driven primarily by the Chinese economy (Chinese bond yields and industrial metals). Next to be impacted are inflation breakevens and sovereign yields in Western economies. The peak correlation for other growth-sensitive assets such as eurozone banks and AUD/JPY arrives with a bigger lag of around 4-5 quarters. This result, while logical, is quite significant, as it gives us a playbook for the ebb and flows in Chinese credit impulse.

The credit impulse turning negative also comes as the Fed could begin to taper in late 2021/early 2022.

Global shipyards receiving a flurry of new orders with build times that take well over a year may prove to be a disastrous investment for some shippers if the global economy slumps due to declining credit impulse and risks of a Fed taper. However, the Fed could unleash Universal Basic Income, and Americans could splurge their stimmy checks every month on worthless Chinese products.