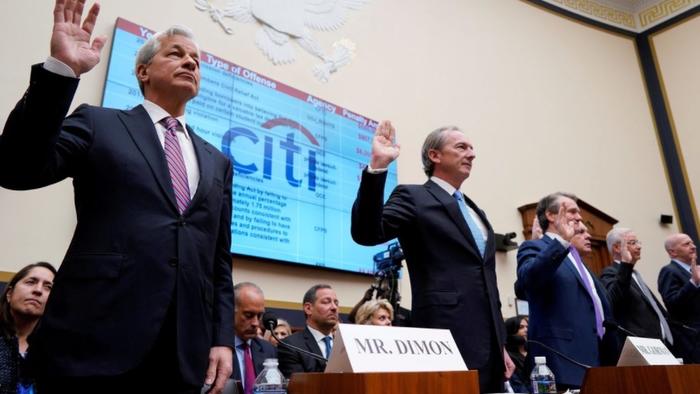 
It has been a while since we have seen the heads of all the major Wall Street banks huddled before Congress. A lot has changed since House Financial Services Committee Chair Maxine Waters last dragged them all to Washington: a pandemic has swept across the global economy, trillions of dollars and stimulus and loans have authorized by the federal government, and Citigroup has appointed Jane Fraser to the CEO’s chair – the first time a woman is leading a Wall Street megabank.

Readers can watch it live below starting at 1000ET:

Of course, we have discussed at length why the latest data on bank lending has shown that something is seriously wrong with the US financial system, as deposits have soared during the pandemic, while loan growth has dragged, leaving banks with an excess amount of reserves that are choking the baking system. But these issues can be complicated, which makes it more difficult for lawmakers and their staff to address the issue (for instance, loan demand is nowhere near enough to offset the Fed’s forced deposit creation which incidentally ends up not in the economy but in capital markets, resulting in broad deflation offset by asset price hyperinflation).

It’s much easier to score points by bashing the bankers for being greedy over-paid predator capitalists… than admit “It’s The Fed, Stupid!”

So, the heads of America’s six largest banks are convening (virtually, it should be said) for what’s being billed as an annual series of hearings. Wednesday morning they will face Senate Banking, where Elizabeth Warren is a member, and gravel-voiced midwestern progressive Sherrod Brown serves as chairman.

On Thursday, they will convene again to face off against Waters and other members of the House Financial Services Committee, which includes AOC, Rashida Tlaib and Ayanna Pressley, three of the four members of “the Squad”. Other progressive members include Al Green, who filed articles of impeachment against President Trump before it was cool, and Chicago’s Chuy Garcia.

Judging by their prepared remarks, the CEOs intend to defend Wall Street’s role in the American recovery effort. Bank’s doled out PPP money, while trillions of dollars in stimulus checks landed in customers’ accounts. And while Morgan Stanley’s decision to appoint four white men as possible successors to CEO James Gorman, JP Morgan has positioned two women to take the CEO job once Jamie Dimon finally retires (though that day might still be far off, unless he has another heart attack).

Banks have helped disburse almost $796 billion in loans through the federal ‘PPP’ – or Paycheck Protection Program – as of late May, which helped many small businesses pay employees and cover rent and other expenses.

Republicans, meanwhile, are, according to WSJ, expected to ask banks whether they are going too far in their stated support for “stakeholder capitalism” – the notion that companies should operate not just for the benefits of its shareholders, but for other “stakeholders”, like employees, the broader community etc.

In addition to racial equity, the hearings are likely to touch on climate change, sustainable investing and the health of the economy, among other topics.

The hearings follow blockbuster quarterly earnings reports from all the big banks who will be represented.

All six CEOs have submitted prepared testimony, starting with Wells Fargo CEO Charles Scharf, who was present during the last round of Wall Street CEO testimony in his previous job as head of BNY Mellon, the custody bank that won’t be making an appearance this time around. Speaking on behalf of Wells Fargo, which memorably faced issues with a Fed-imposed restriction on asset expansion that complicated the early stages of Wells’ ‘PPP’ program, Scharf said that while his bank’s response wasn’t perfect, it nevertheless managed to offer “unprecedented assistance at a scale and speed that had never been done before,” including waiving fees and deferring payments for 3.7 million consumer and small business accounts.

“We provided more than one million mortgage forbearances and suspended residential property foreclosures and evictions to keep people in their homes. And we processed approximately $80 billion in federal stimulus payments,” Scharf said.

Next up, Goldman CEO David Solomon, who was also present last time around, and will likely be questioned about his bank’s treatment of junior employees, after a handful of desperately overworked analysts went public with their concerns. Solomon’s prepared remarks cut right to the point, asserting that Goldman and its peers “are more able to withstand stress events and are also ultimately more resolvable without threatening the financial system or needing government support, consistent with Dodd-Frank’s resolution plan requirements.” Later, in the “appendix” to Solomon’s testimony, the CEO addresses the results of Goldman’s “One Million Black Women First Round of Capital Investments and Philanthropic Grants.”

Making her first appearance, Citi’s Jane Fraser addressed how Citi has improved its capital base since the financial crisis, allowing it to easily manage the risks associated with the pandemic, while the bank helped millions of customers by offering late-fee relief and other types of assistance. In a section where Fraser addresses the bank’s “priorities going forward,” “building on our record of financial inclusion to support an inclusive recovery” was No. 1. “. At Citi, we have a strong record of breaking down barriers impeding access to financial services and helping direct the flow of capital into communities that have traditionally lacked it,” she said.

JPM’s Jamie Dimon will likely come in for a few “attaboys” from lawmakers after appointing two of the bank’s most-senior female executives to co-manage JPM’s consumer banking operation, a move that will put both of them in the running to succeed Dimon. Moreover, in his testimony, Dimon discussed the bank’s commitment to expanding access to financial services in communities of color. “We opened our first Community Center branch in New York’s Harlem community, and have replicated that model in minority communities around the country, including Chicago, Minneapolis, New Orleans, Dallas, and the Crenshaw neighborhood in Los Angeles, with many more coming in the next year.”

Bank of America CEO Brian Moynihan declared that the 2010s were a “decade of transformation” for Bank of America as t “took significant steps to reduce the scope and complexity of our company, as envisioned in the Dodd-Frank Wall Street Reform and Consumer Protection Act.

Finally, we have Morgan Stanley’s James Gorman, who – after a review of the bank’s capital leverage ratios, buybacks and dividend payments – discussed the bank’s “successes and failures” in recruiting a diverse workforce. “I acknowledge that progress in this area has been slow for us – and we can and should do better. The events of 2020 focused all of us in a way we had not been before and this was the ultimate call to action to make meaningful change.”

Will that be enough to stave off a shellacking from Democrats hammering Morgan Stanley for setting up another white man to take over after Gorman? We shall see when the hearing begins at 1000ET. It’s expected to last for hours, before CEOs call it a day, and return to rehash most of the same issues tomorrow with members of the House.