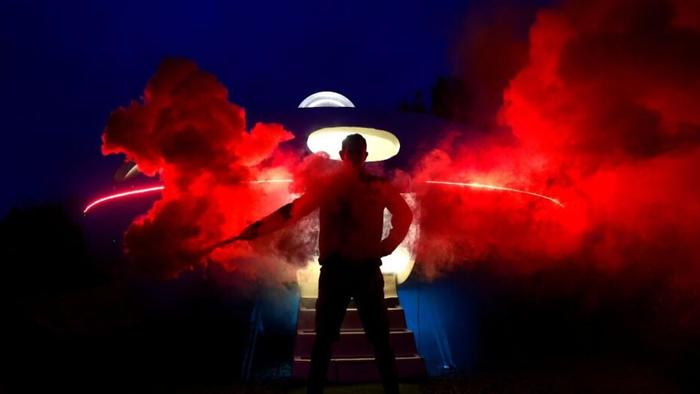 
Authored by Finian Cunningham via The Strategic Culture Foundation,

There are reasons to be skeptical. After decades of stonewalling on the issue, suddenly American military chiefs appear to be giving credence to claims of UFOs invading Earth.

Several viral video clips purporting to show extraordinary flying technology have been “confirmed” by the Pentagon as authentic. The Pentagon move is unprecedented.

The videos of the Unidentified Flying Objects were taken by U.S. air force flight crews or by naval surveillance and subsequently “leaked” to the public. The question is: were the “leaks” authorized by Pentagon spooks to stoke the public imagination of visitors from space? The Pentagon doesn’t actually say what it believes the UFOs are, only that the videos are “authentic”.

A Senate intelligence committee is to receive a report from the Department of Defense’s Unidentified Aerial Phenomena (UAP) Task Force next month. That has also raised public interest in the possibility of alien life breaching our skies equipped with physics-defying technology far superior to existing supersonic jets and surveillance systems.

Several other questions come to mind that beg skepticism. Why does the phenomenon of UFOs or UAP only seem to be associated with the American military? This goes back decades to the speculation during the 1950s about aliens crashing at Roswell in New Mexico. Why is it that only the American military seems privy to such strange encounters? Why not the Russian or Chinese military which would have comparable detection technology to the Americans but they don’t seem to have made any public disclosures on alien encounters? Such a discrepancy is implausible unless we believe that life-forms from lightyears away have a fixation solely on the United States. That’s intergalactic American “exceptionalism” for you!

Moreover, the released videos that have spurred renewed public interest in UFOs are always suspiciously of poor quality, grainy and low resolution. Several researchers, such as Mick West, have cogently debunked the videos as optical illusions. That’s not to say that the U.S. air force or naval personnel were fabricating the images. They may genuinely believe that they were witnessing something extraordinary. But as rational optics experts have pointed out there are mundane explanations for seeming unusual aerial observations, such as drones or balloons drifting at high speed in differential wind conditions, or by the crew mistaking a far-off aircraft dipping over the horizon for an object they believe to be much closer.

The military people who take the videos in good – albeit misplaced – faith about what they are witnessing are not the same as the military or intelligence people who see an opportunity with the videos to exploit the public in a psychological operation.

Fomenting public anxieties, or even just curiosity, about aliens and super-technology is an expedient way to exert control over the population. At a time when governing authorities are being questioned by a distrustful public and when military-intelligence establishments are viewed as having lost a sense of purpose, what better way to realign public respect by getting them to fret over alien marauders from whom they need protection?

There is here a close analogy to the way foreign nations are portrayed as adversaries and enemies in order to marshal public support or least deference to the governing establishment and its military. We see this ploy played over and over again with regard to the U.S. and Western demonization of Russia and China as somehow conveying a malign intent towards Western societies. In other words, it’s a case of Cold War and UFOs from the same ideological launchpad, so to speak, in order to distract public attention from internal problems.

However, more worrying still is that there is a dangerous reinforcing crossover of the two propaganda realms. The fueling of UFO speculation is feeding directly into speculation that U.S. airspace is being invaded by high-tech weapons developed by Russia or China.

U.S. lawmakers are demanding answers from the Pentagon about whether the aerial “encounters” are advanced weaponry from foreign enemies who are surveilling the American homeland at will. Some U.S. air force aviators have recently expressed to the media a feeling of helplessness in the face of seeming superior technology.

At a time of heightened animosity towards Russia and China and febrile talk among Pentagon chiefs about the possibility of all-out war, it is not difficult to imagine, indeed it is disturbingly easy to imagine, how optical illusions about alien phenomena could trigger false alarms attributed to Russian or Chinese military incursions.

The government has never told the truth about anything yet suddenly is coming clean on aliens and UFOs. pic.twitter.com/LcHgoUj4vw

The stoking of UFO controversy appears to be a classic psyops perpetrated by U.S. military intelligence for the objective of population control. Its aim is to corral the citizenry under the authority of the state and for them to accept the protector function of “our” military. The big trouble is that the psyops with aliens are, in turn, risking the exacerbation of fears and tensions with Russia and China.

With all the Pentagon-assisted chatter, it is more likely that an F-18 squadron could mistake an errant weather balloon on the horizon for an alien spacecraft. And amid our new Cold War tensions, it is but a small conceptual step to further imagine that the UFO is not from outer space but rather is a Russian or Chinese hypersonic cruise missile heading towards the U.S. mainland.