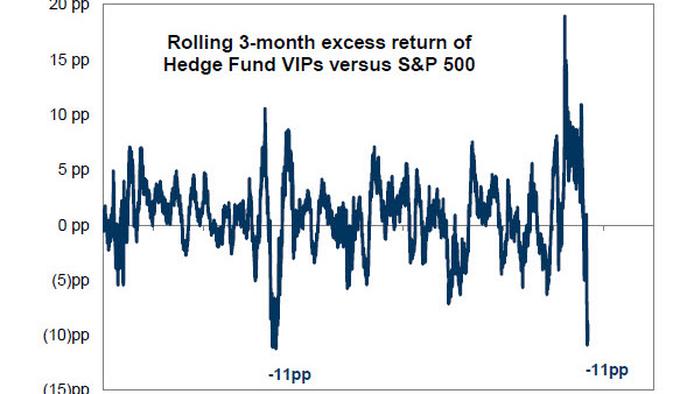 
Earlier today we pointed out the big highlight from the latest Goldman hedge fund tracker for Q1 2021, which is that after years of being the undisputed king, Amazon was finally dethroned from atop its throne at the top of the Hedge Fund VIP list and replaced with fellow FAAMG stock Facebook.

As noted earlier, despite the change at the top, the same five stocks still rank atop Goldman’s list of the most popular long positions, however in a new order: FB, MSFT, AMZN, GOOGL, BABA. Of the hedge funds in the analysis, 27% own FB shares and 57% of those own it as a top 10position. Of the 15 new VIPs, most are cyclicals, including C, GM, and FCX.

What are some of the other notable findings? Below we list what else caught Goldman’s attention:

First, despite another strong start to the year, hedge fund performance was significantly challenged, again. Goldman’s Hedge Fund Very Important Positions (HF VIP) basket of the most popular hedge fund long positions has lagged the S&P 500 by 11 pp (-6% vs. +5%) over the past 3 months, tied for its worst underperformance on record.

As we observed previously when we noted the biggest shorting of tech stocks by hedge funds in five years, hedge funds are rotating into Value. The latest positioning filings show that hedge funds rotated sharply away from Growth and into Value in early 2021, reducing their factor tilt to Growth to below the 20-year average, matching 3Q 2018 as the lowest in five years. Even so, they still remain tilted toward Growth on net. And the shift away from Growth has been pronounced among extremely high-growth, high-multiple stocks, while funds generally increased their allocation towards mega-cap ‘FAAMG’ stocks during the quarter.

In addition to the shift in sector-neutral factor exposures, hedge fund sector positions also indicate a rotation from Growth to Value. Funds rotated away from Info Tech, Comm Services, and Consumer Discretionary in 1Q and added to positions in lower-valuation, cyclical sectors including Energy and Materials.

Although funds clearly reduced their Growth tilts, the rotation has not been uniform across the Growth stock complex. After years of rising allocations to high-growth, high-multiple stocks, hedge fund long portfolio weights in stocks with extremely high EV/sales ratios collectively declined during 1Q as those stocks began to sell off. At the same time, however, funds raised their allocations to lower-multiple.

‘Retail’ stock volatility persists. Stocks heavily traded by retail have underperformed the S&P 500 by 8% since Mar-12. And stocks that are heavily traded by retail are likely to remain volatile following the unusually high volatility inBitcoin over the past week. Goldman also observes that “the synchronized underperformance of the most popular hedge fund and retail stocks suggests that, like hedge funds, individual investors have both contributed to and suffered from the recent growth stock drawdown. In recent months, at the same time that Growth stocks declined and hedge funds reduced leverage, online broker activity and call option volume each suggest that retail traders moderated their equity trading activity.”

HF shorts have worked relatively well. Following the short squeeze in January, the most concentrated short positions have also lagged the market, supporting alpha, but not enough to offset the decline in popular stocks.

Year to date, the most popular hedge fund long positions have outperformed the broad market in roughly half of sectors, including the cyclical Energy, Materials, and Financials sectors as well as in Health Care, which currently represents the largest net weight in the aggregate hedge fund portfolio. However, VIPs have generally fared less well in Tech, Comm Services, and Consumer Discretionary, the other sectors that represent the largest weights in hedge fund portfolios

As a result, according to GS Prime Services, equity long/short hedge funds have returned -1% YTD through mid-May.

One contributor to the recent underperformance of the most popular hedge fund long positions is the sharp market rotation from Growth to Value. Hedge fund VIPs are generally tilted to Growth, and that tilt has served funds well in recent years. Growth as a factor had steadily outperformed since 2017, including a dramatic surge in 2020, but Value stocks have generally outperformed since the vaccine efficacy announcements last November. More recently, many extremely high-growth, high-multiple stocks have declined particularly sharply, including our Long Duration basket and a basket of Non-Profitable Tech companies. Since early February, each of those baskets has declined by more than 20% alongside a 5% gain for the S&P 500

And speaking of shorting, short interest appears to have stabilized close to the lowest level on record. Short interest for the median S&P 500 stock declined during most of 2020 and currently equates to 1.5% of float. This is close to the share reached in January of this year and the 25-year low set in 2000. Short interest in every sector now registers well below its historical average.

For those curious, here is the anti-HF VIP list – the 50 stocks that represent the largest short positions. Tesla, not surprisingly, appears at the top.

HFs are less concentrated. HF portfolio concentration has sharply declined sincen1Q 2020 and now stands at its lowest level since 2015. The typical hedge fund holds 63% of its long portfolio in its top 10 positions, slightly above the historical average. Along with falling concentration within hedge fund portfolios, crowding across hedge fund portfolios has generally declined in the past year. However, the Goldman Hedge Fund Crowding Index rose slightly in 1Q 2021 and remains substantially above the longer-term average.

Alongside falling concentration, portfolio position turnover continued to rise in 1Q 2021. The average fund turned over 31% of distinct equity positions in 1Q, and turnover increased in 5 of the 11 sectors.

Health Care represents the largest sector net exposure (21%) and the largest overweight (+768 bp) relative to the Russell 3000. Info Tech represents 19% of funds’ net exposure but is the largest underweight (-667 bp). Hedge fund and mutual fund sector tilts are generally in the same direction, with Financials the only exception: Mutual funds carry a large overweight in the sector, but hedge funds have a net underweight tilt relative to the Russell 3000.

Hedge funds rotated away from secular growth favorites Info Tech, Comm Services, and Consumer Discretionary during 1Q and into cyclical sectors including Industrials and Materials. Hedge funds reduced their net positions in Info Tech by an additional 175 bp in 1Q 2021, the largest change in any sector. The largest decline was in Semiconductors, but eight of the 13 Info Tech subindustries experienced a decrease in net tilt. The Info Tech sector tilt ranks in just the 8th percentile relative to the past 10 years, in part due to the large index weight of the sector.

In summary: the “smart money” once again underperformed both the market (and retail investors), continuing its dismal track record ever since the Feds busted expert networks back in 2010.

Pro subs can find the full report in the usual place.