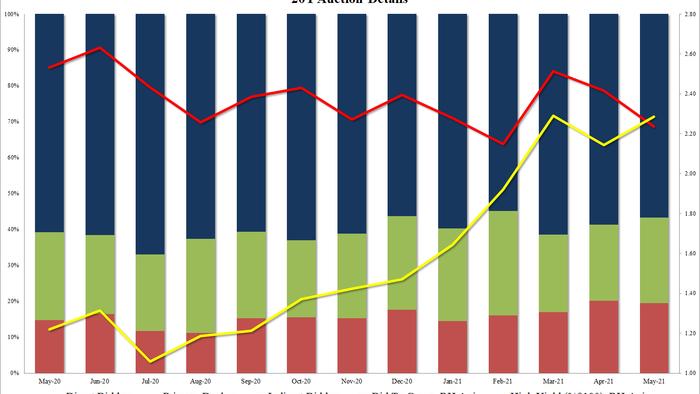 
After last week’s mini-taper of 20Y POMOs by the Fed, the market was closely watching today’s auction of $27BN in 20Y bonds for signs of weakness, especially after this morning’s dismal 2Y bund auction in Germany which saw the weakest demand since July 2019, and they were not disappointed (or rather, they were).

As a reminder, on May 13 the Fed altered the way it divides up the maturity buckets for its planned POMO operations, spooking some traders into seeing a mini-taper starting for the long end.

The results of today’s sale which came one year after the first 20Y auction was launched back in 2020 showed that demand indeed pulled back, with the high yield coming in at 2.286%, just shy of the tenor high hit in March when it priced at 2.29% and tailing the When Issued 2.286% by 1bp, the first 20Y tail since February.

The bid to cover of 2.24 was also disappointing, dropping sharply from last month’s 2.42 and the lowest since February’s 2.15.

Internals were likewise disappointing, with Indirects dropping to 56.7%, well below the 58.7% in April and 6-auction average, and with heavy Directs demand – taking down 19.5% or the second highest in recent 20Y history – Dealers were left holding 23.8% of the auction, just below the 24.5% recent average.

Overall, a sloppy ugly auction amid mini-taper fears, although it could certainly have been far uglier as today’s generally risk-off tone certainly helped boost demand.

For those who missed it, this is what the Fed said last Thursday:

Effective May 14, 2021, the Open Market Trading Desk (the Desk) at the Federal Reserve Bank of New York is making technical adjustments to its purchases of Treasury securities conducted on behalf of the Federal Open Market Committee (FOMC). Specifically, the Desk is updating the maturity ranges for its purchase sectors and the associated sector weights to ensure that the allocation across sectors remains roughly proportional to Treasury securities outstanding in those sectors.

These updated allocations represent a modest shift in the distribution of purchases the Desk has been using since June 2020, when allocations were last updated. As a result of these changes, the allocation across the 7- to 30-year nominal coupon maturity range will increase by 3 percentage points, in line with shifts in the distribution of Treasury securities outstanding. The allocation to the shortest nominal coupon sectors and Treasury inflation-protected securities (TIPS) will decrease modestly. Securities ultimately purchased in each sector will depend on the offers submitted by counterparties in each operation, which are evaluated based on their proximity to prevailing market prices at the close of the operation, as well as measures of relative value.

In general, the Desk will distribute monthly purchases across eight different sectors based roughly on the 12-month average of the proportional par amount of Treasury securities outstanding in each sector. The table below includes the specific sectors the Desk will use and their sector weights based on 12-month average amounts outstanding as of the end of April 2021. Purchase allocations are subject to change, including as needed to sustain the smooth functioning of the Treasury market, and will be updated periodically.