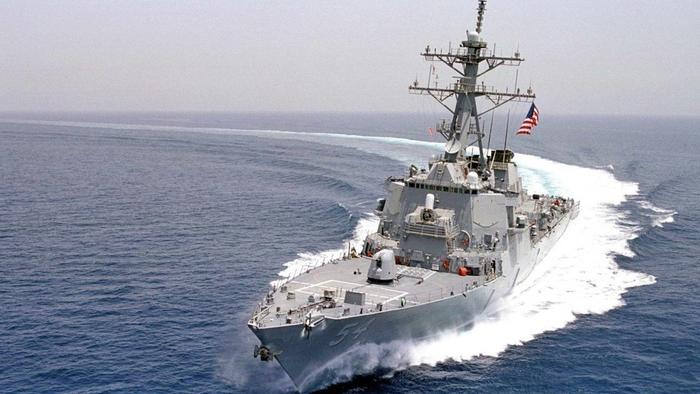 
On Wednesday China blasted the latest passage by a US Navy destroyer through the Taiwan Strait, calling it a serious “provocation” which endangers peace and stability in the region.

The US Navy’s 7th Fleet said that its guided missile destroyer USS Curtis Wilbur conducted a “routine transit” through the Taiwan Strait on Tuesday, which Beijing interpreted as a hostile act meant to send “wrong signals” to Taiwan independence forces.

China’s Defense Ministry’s Wednesday statement said further that US actions  are “sending wrong signals to the ‘Taiwan independence’ forces, deliberately disrupting and sabotaging the regional situation and endangering peace and stability across the Taiwan Strait.”

The PLA military (China’s People’s Liberation Army) further confirmed that it followed the ship in order to monitor its movements in order to “strictly guard against all threats and provocations.”

It marks the US Navy’s fifth Taiwan Strait transit this year via the US 7th Fleet, which is based in Japan. ABC News observes:

China last month complained that activity by U.S. military ships and surveillance planes directed at it has increased significantly under President Joe Biden.

It was particularly disturbed by close-in observation of the Chinese aircraft carrier Liaoning and its battle group by a U.S. destroyer in the South China Sea, as advertised by a widely distributed photo of U.S. officers relaxing on deck with the Chinese flattop well within sight.

During that prior encounter China charged the US with having “seriously interfered” with Chinese military training and “safety of navigation” of both sides.

US navy sends China the message: ‘we’re watching you’ https://t.co/LKuV5OjkNR “In the photo, Commander Briggs looks very relaxed with his feet up watching the Liaoning ship just a few thousand yards away . . . showing they take their PLA counterparts lightly”

Many regional analysts have since warned that with such naval encounters increasingly becoming the ‘norm’ – there’s at the same time a lack of military-to-military communication that makes the situation especially dangerous for a potential flare-up of conflict between the two navies.