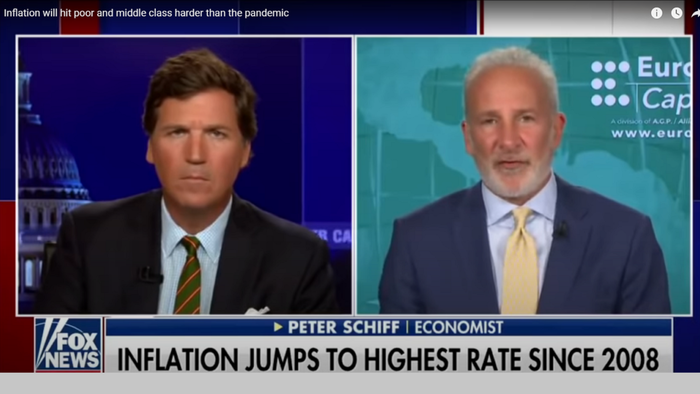 Consumer Price Index (CPI) data for April came in much hotter than expected. Year-on-year, inflation is up 4.2%. The big number even prompted Federal Reserve Vice Chairman Richard Clarida to say, “We were surprised by higher than expected inflation data.”

Peter Schiff appeared on Tucker Carlson’s show to talk about the consequences of more printed money chasing fewer goods. Peter said inflation is going to hit the middle class harder than the pandemic.

Peter said this hot CPI print is a cause for concern and ultimately it is a tax.

It is the inflation tax. And if you look at how much the cost of living went up, measured by the CPI in the first four months of this year, it’s 2%. So, if you triple that to annualized it, we have consumer prices rising at 6% annually. But if you look at the monthly numbers, every month it accelerates. So, if you extrapolate the trend of the first four months of this year for the entire year, you’re going to get a 20% increase in consumer prices in 2021.”

Tucker asked a poignant question. If the value of the US dollar is falling as quickly as the CPI suggests, why would any country want to invest in US bonds? Doesn’t this threaten to cause a shake-up?

Peter said they won’t want to invest. They’ll be selling US Treasuries.

Anybody that can connect these dots is going to be selling US Treasuries. And the problem is there’s a lot of US Treasuries to be sold.”

Peter noted that a lot of people are talking about a shortage of goods.

The real problem is the surplus of money. Whenever you print a lot of money, it’s always a goods shortage because the Federal Reserve can print all the money they want, but they don’t print products to buy with the money. So, we have all this money being printed. We’re not producing a lot. People are sitting at home cashing unemployment checks. This is a tax. It’s an inflation tax, a Biden tax, whatever you want to call it. But when Joe Biden says ‘don’t worry! Only people that make over $400,000 a year are going to have to pay higher taxes to fund all these programs,’ he’s lying. Because every American is going to pay the inflation tax. And it’s going to hit the middle class and the poor the hardest.”

That led Tucker to another poignant question. It’s clear that printing money means more dollars chasing fewer goods. Of course, we’re going to end up where we are today. So, why didn’t the geniuses making these policies anticipate this?

Peter said even the so-called geniuses at the Federal Reserve keep telling us not to worry. According to them, inflation is “transitory.”

But these are the same guys that told us not to worry about the subprime mortgage market. Remember early on, Ben Bernanke said, ‘ Don’t worry about subprime. It’s contained.’ Well, now they’re saying don’t worry about inflation. It’s transitory. Inflation is as transitory now as the subprime market was contained. And this inflation crisis is not only going to be worse than the financial crisis, it’s going to be worse than the pandemic. Because the government’s cure is what’s going to kill the economy, not the disease itself.”