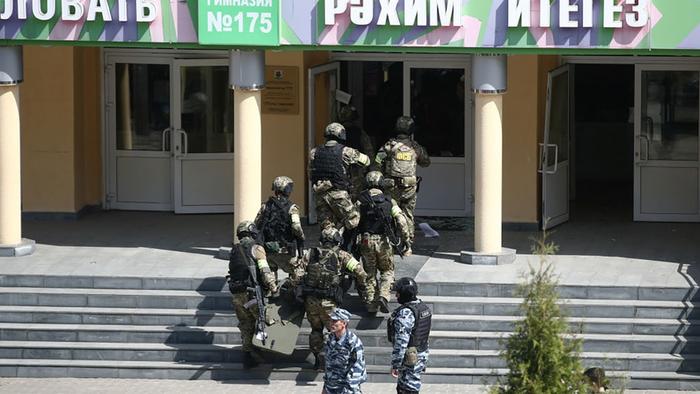 
On Tuesday a man described as a former student of a school in the southwest Russian city of Kazan walked into the building and began randomly shooting young students, killing at least 8, including seven middle school students and a teacher.

The shooting apparently went on for a lengthy amount of time given 21 others were hospitalized, according to the Associated Press, and some among the dead and wounded had jumped from a third story window while trying to escape the hail of bullets.

Police are said to now be investigating whether the 19-year old shooter had accomplices, in a massacre which is being compared to the 2004 Beslan school siege, which had left over 330 dead after a major Islamist terror attack and hostage crisis.

Governer of the provincial republic Rustam Minnikhanov confirmed later in the day that “The terrorist has been arrested, (he is) 19 years old. A firearm is registered in his name. Other accomplices haven’t been established, an investigation is underway.”

“We have lost seven children… four boys and three girls,” Minnikhanov said according to Reuters. He also described that the killings at Kazan’s School No. 175 was carried out by a registered gun owner. The eighth confirmed death was a teacher.

This morning, lone shooter opened fire in one of the schools in Kazan, Russia. 9 people were killed (eight children and a teacher), at least 32 injured.

The attacker was detained. Below a footage of him heading to the school before shooting. pic.twitter.com/esxKZY28dE

The Moscow Times features further some of the horrific details as follows:

Video posted by Telegram news channels shows children jumping out of the school’s windows to the sounds of gunfire. The state-run RIA Novosti news agency reported that two more students died after jumping from a third-floor window, citing a source in the emergency services, but these deaths have not been confirmed.

Officers detained the shooter, whose official motive remains unclear. Russian media outlets identified him as School No. 175 graduate Ilnaz Galyaviyev, 19, and reported that he announced his plans to commit the shooting on social media.

The tragedy has once again raise the issue of gun control at the top levels of the Russian government, with President Putin saying he wants to immediately examine the issue.

Authorities in the Tatarstan region say a shooting spree and an explosion at a school in the regional capital, Kazan, has left eight people dead, prompting #Russia President Vladimir Putin to order a clampdown on weapons. https://t.co/sQTNp6NChV

Local media reports say that of the 21 people currently hospitalized with wounds, 18 children of these are children and that six are still in “severely grave condition.”

Russian media reports are also detailing that the shooter posted messages on the internet last week saying that he intended to kill a lot of people. The teen had reportedly been previously expelled from the same school.