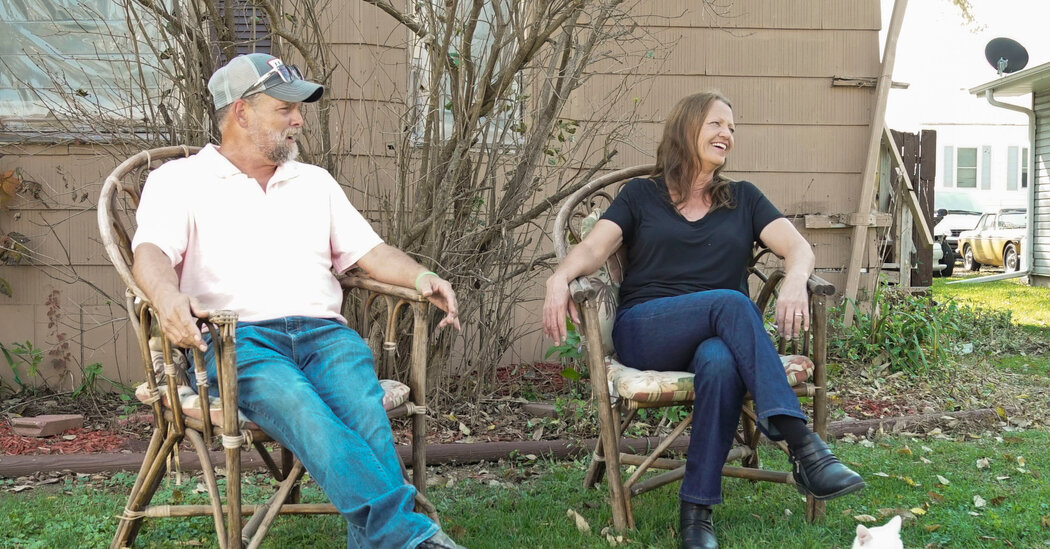 
I saw myself on television this week, in the modern sense of seeing someone with whom I identified. It was not a matter of color or gender, neither of which matched. But we were both from Iowa, both born in 1960, both got A’s and B’s, both had a parent with a problematic relationship to a local watering hole (Elks Club for her, V.F.W. for me).

Oh, and you can date both of us by the way we refer to speed or methamphetamine as “crank.”

The stories of small-town Iowans of my age are not plentiful on TV, and I watched this one with rapt attention, even though our lives diverged significantly after childhood. I left the state, went to college and got a job at a newspaper. She stayed, opened a biker bar and started her own business cooking and selling meth. When I was making $800 a week, she was sometimes grossing $800,000. That went a long way in Iowa in the early 1990s.

This soul sister of mine is Lori Arnold, the subject of “Queen of Meth,” a three-part profile that premiered Friday on the streaming service Discovery+. True-crime documentaries arrive by the pallet-load these days — Arnold could stack them in her post-criminal job as a forklift operator — and I took the time to watch this one purely for the Iowa connection.

I might have enjoyed “Queen of Meth” even if it were set in Ohio or Idaho, though. A modest production, it relies on the no-nonsense narration of Arnold, who turns out to be a fine companion for three hours and an engaging and lucid guide to the hows and whys of methamphetamine in the Midwest. She has a matter-of-fact charisma and a ready laugh, and you can see how those qualities would have made it easy for her to sell drugs in the depressed, working-class town of Ottumwa, Iowa.

“Queen of Meth” is a story of Arnold’s rise, fall and qualified redemption, structured around a trip back to Ottumwa, which she moved away from after her second stint in prison. (Arnold served nine years on drug and gun charges, started dealing again and served another six years.)

Visually it tends toward the melancholy, as Arnold revisits her now-shuttered bar and the farm she once owned where she and her husband, who later died in federal prison, built their own meth lab, like upper Midwestern Walter Whites. The filmmakers like to pose Arnold and other interview subjects in front of tractors or in long shot against drab warehouses or faded downtowns.

But the tone is rarely funereal, thanks to the resolute levelheadedness of Arnold and to the liveliness of the Greek chorus of friends and neighbors — most of whom dealt for Arnold, or bought from her, or both — who attest to her generosity and to how much fun she was to be around.

“Queen of Meth” is also the story of what a catastrophe meth has been for the Midwest and of the damage it did to many of those friends of Arnold’s, and to their children. The show doesn’t play that down, though a significant portion of Ottumwa may feel that it’s a more sympathetic showcase than she deserves.

Gathered in lawn chairs around a fire pit, Arnold and her former associates talk about the old days, and about the harm done to lives and communities, though they seem less angry than bemused, like survivors of a hurricane.

The person who expresses the most open anger is Arnold’s brother Tom, the actor and former husband of Roseanne Barr, who pushes her to acknowledge what he sees as their own mother’s damaging neglect of them. (This is the place to mention that without this celebrity connection, Lori Arnold’s drug-dealing would not have been news outside of Wapello County.)

In scenes with the son who was forced to grow up without her, Lori Arnold is clearly emotional, but grief and guilt don’t come naturally to her. She’s cleareyed about her choices, but her approach to introspection is as businesslike as her approach to meth. “I’m more embarrassed about my past than I used to be,” she allows.

I would not want to have lived Arnold’s life, or have had the effect she did on others’ lives, but the Iowan in me can’t help identifying with, and admiring, her get-on-with-it approach. I’d like to think that if the feds had broken down my door and hauled me to jail, I would have used my one phone call to order a pizza, too.