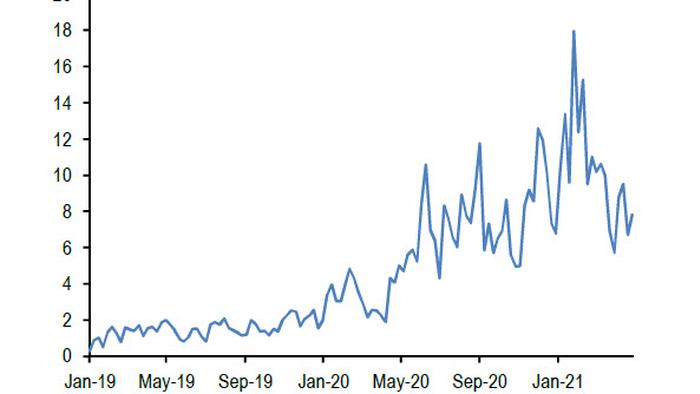 
A little over a month ago, at the end of March, we first pointed out something troubling for the bulls: after leading the market in terms of both sentiment and volume, retail participation had collapsed. This was most obvious when looking at OCC option data, where SpotGamma noted “a sense of decay or attrition happening on the call side.”

Bloomberg also picked up on this, warning of call fatigue as call option volumes – the preferred investment instrument of millions of GenZ and Millennial traders – had fallen off a cliff.

Now, it’s JPMorgan’s turn to report what our readers knew almost two months ago, namely that the latest data reveals that US retail investors share in equity trading declined sharply in March after a strong January and February, and a record high share of 28% in December.

At an aggregate level, the share of retail activity had reached a record high of 28% last December as percentage of total US equity market volume, with this share declining sharply to 18% in March. That said, this 18% share is still above pre- virus levels of around 12%, so the drop in March does not herald a return to pre-virus norms.

So while we know what happened, the question is why: even JPMorgan’s Nick Panigirtzoglou is confused, writing that “this decline is puzzling given the third round of stimulus checks in March, thus raising questions about the appetite of retail investors to invest in individual stocks or stock options on them.“

What about April? In terms of buying of passive equity funds there has also been significant slowing as shown in Figure 3. A similar picture emerges when looking at individual stocks and call options on individual stocks, where the preliminary data shows continued weakness in April.

To see this in the option space, JPM looks at small traders equity option flows, i.e. option customers with less than 10 contracts. These data come from OCC, the world’s largest equity derivatives clearing organization. They are weekly, with the week ending April 30th as the last available observation. The next chart shows these small traders’ option flows for exchange-traded individual equity options in the US. After rising to record highs in January, this call option buying metric subsided significantly in Feb and March.

In April as well these call option flows seems to be consolidating at the lower levels seen in the March end signaling that US retail investors have become less willing to invest in call options on individual stocks. Equity baskets containing stocks popular with US retail trading platforms, as shown in Figure 5, are conveying a similar message of continued underperformance in April.

TL/DR: the latest quarterly data confirm what we speculated back in March, namely that US retail investors share in equity trading declined sharply in March after a strong January and February and a record high share of 28% in December. To JPMorgan, “this decline is puzzling given the third round of stimulus checks in March”, thus raising questions about the appetite of retail investors to invest in individual stocks or stock options on them. Preliminary data for April show little improvement in this appetite.