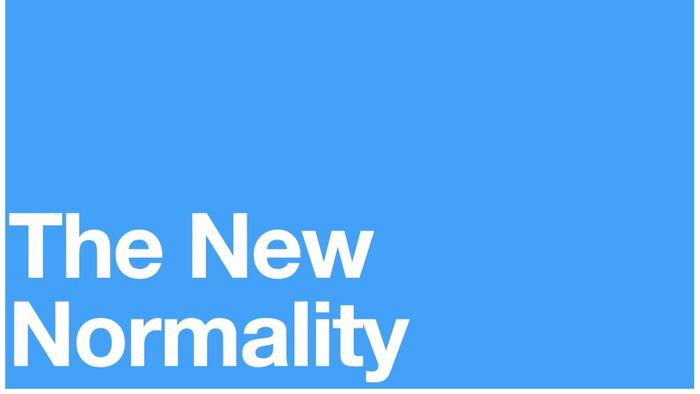 
Authored by Michael Every via Rabobank,

The Normality We Were Promised

Happy Friday! It’s end of the week and the end of the month, and a third of 2021 is now already behind us. Does it feel like the promised return to normality for you yet? Maybe it does for some markets, with US stocks at the latest highest-ever high; and while commodity prices aren’t that high, they are certainly at the highest for many years – and still rising for a variety of reasons. Meanwhile, our global-economy meme factory, like US 10-year yields, is still waiting to see what happens. Let’s just take a brief moment then to look at some less well-covered news stories from around the world, and see what picture they paint.

In Europe, Politico points out the recent ‘Sofagate’ was all about an internal power struggle. It includes a line I wish I had written: “A joke emerged among critics of the Commission president: She was not leading the geopolitical Commission, but the ego-political Commission.” Which is a lot less funny if you are European in a new age of Great Power politics. The European Systemic Risk Board (ESRB) warning: “In a worst-case scenario, the postponed insolvencies would suddenly materialise and trigger a recessionary dynamic, potentially causing further insolvencies…The current low rate of insolvencies would then be similar to the sea retreating before a tsunami.” Yet Finland is still blocking the roll out of the Recovery Fund, which a court has ruled requires a two-thirds not a simple parliamentary majority to pass. However, the Helsinki Times quotes a local economist saying this is unlikely to cause market jitters because “If Finland were to reject it, it’d be difficult to see the package ultimately collapse in Europe. Large countries have already approved it, and it’d be taken forward one way or the other.” Which says a lot about EU internal power – and on the external front, Telecom Italia is apparently going to drop Huawei as a supplier.

In the UK, the “Cash for Curtains” scandal has led Prime Minister Johnston to declare “I love John Lewis” (a middle-class British department store that doesn’t sell GBP58,000 wallpaper); and as Scotland gets ready to vote, in Northern Ireland the Democratic Unionist Party are perhaps about to elect a new leader who believes the world is only 6,000 years old, with even Daily Mail mutterings of what this might also mean for the future of the Union.

In New Zealand, we have the headline ‘China’s communists fund Jacinda Ardern’s Labour Party: What the United States Congress was told’, which states “US lawmakers needed to consider whether New Zealand should be kicked out of the Five Eyes intelligence alliance because of problems at its “political core”. This issue also seems to cut across party lines, as the “bombshell testimony” also saw a former CIA analyst allege “anything on China that was briefed to Bill English was briefed to Mr Yang Jian”, the National MP revealed last year as having trained spies for China.”” Meanwhile, after ordering the RBNZ to include house-price inflation as part of its remit, the Kiwi government is apparently considering introducing both stamp duty, to tax house purchases, and rent controls. One upon a time, it was this kind of interference in markets that would have seen US analysts screaming about New Zealand being ‘pinkos’: not today, of course – although even US President Biden didn’t go as far as rent controls in an annual address to Congress that saw Wall Street bashed and the economic role of the state praised.

In China, we have seen a flurry of laws and regulations: to prevent spying by foreign entities, which covers a wide range of potential offenders; to allow Hong Kong to block the arrival of anyone they see fit, which can technically also be used to block their exit; and a new mainland law making binge eating and food waste illegal. Food vloggers are banned from making and distributing binge-eating videos, with fines of up to CNY100,000 (USD15,450); restaurants can charge diners an extra fee if they leave excessive amounts of food uneaten; food providers that induce consumers into making excessive orders can be fined CNY10,000; and food service operators that waste large amounts of food can be fined up to CNY50,000. Is this about pocket books and culinary etiquette, or food security? China has also just reigned in the fin-tech arms of 13 key firms, including Tencent, ByteDance, JD.com, Meituan, and Didi Chuxing.

We also saw China announce that, contrary to rumours, its population rose in 2020 – but no figures were given. (One person would still be an increase, I suppose.) On which, a PBOC working paper argues that even as the population ages, this does not mean China should run down its savings: rather, it should maintain savings and substitute capital for labour. As the paper states:

“Understand this: without [capital] accumulation, there is no growth. Secondly, we must recognize that consumption is never a source of growth. We must understand that it is easy go from frugality from extravagance, but difficult to go from extravagance to frugality. The high consumption rate of developed economies has historical reasons; once you switch, there’s no going back, so we should not take them as an example to learn from. Thirdly, we should pay attention to investment. We must expand domestic investment in the central and western regions; although China’s marginal return on capital continues to decline, the potential for replacing workers with robots in these regions is still promising. We must expand outward, and especially invest in Asia, Africa, and Latin America, because these regions provide the only remaining large demographic dividend.”

There is *so much* to unpack there on so many fronts – and so little correlation between this view and the straight-line bullish projections one sees elsewhere. At the very least it means our current global imbalances, and geopolitical tensions, will be locked in ahead rather than addressed. And when can we finally drop the “China is shifting to a consumption model” meme?

In the US there is obviously lots of coverage of President Biden’s annual speech, aimed at competing with China via higher public investment; and on the political math of how many of these plans could actually make it through the present Congress ahead of the 2022 mid-terms. And in the background, former President Trump gave a press interview where he strongly suggested he would run again in 2024, and may restart MAGA rallies as soon as next month.

Lastly, The Economist magazine has as its front cover today a map of Taiwan on what is obviously a military radar screen under the title: “The Most Dangerous Place on Earth”.

So there you have it: just a little snapshot of just some events transpiring around the world in the last few hours as one ponders what the rest of 2021 holds. Happy Friday!