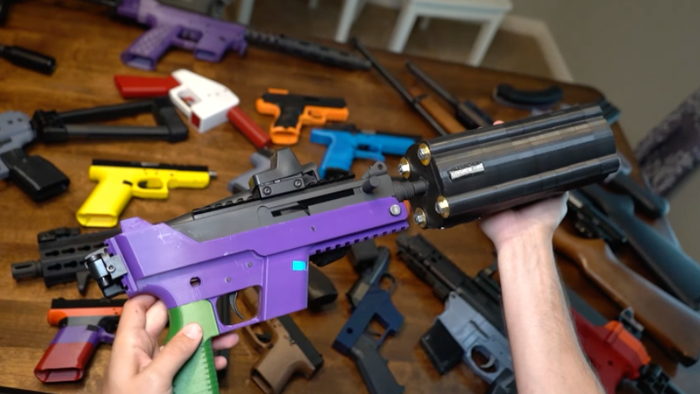 Here’s more from Courthouse News Service on the divided panel of judges.

They found a 1976 law, the International Security Assistance and Arms Export Control Act, and its subsequent amendments forbid judicial review of State Department decisions on what is considered a “defense article” subject to regulation.

“Because Congress expressly precluded review of the relevant agency actions here, we vacate the injunction and remand with instructions to dismiss,” Nelson wrote for the majority.

In a dissenting opinion, U.S. District Judge Robert Whaley, a Bill Clinton appointee sitting on the panel by designation from the Eastern District of Washington, argued that his colleagues misinterpreted what Congress intended when it gave the president power “to designate” what items are considered “defense articles and defense services” under the law.

Whaley wrote that a 1981 amendment to the law “clarified that the president’s removal power was separate from its designation power and was subject to congressional oversight.” He said the majority disregarded a legal principle which presumes any words omitted from a statute should be deemed intentionally excluded from the law.

“I disagree with the majority’s holding which allows this new regulatory system to escape appropriate oversight,” Whaley wrote.

Bybee and Nelson rejected that criticism, arguing that prior to the 1981 amendment, the phrase at issue clearly encompassed the president’s power to add to and remove items from the list of regulated munitions.

Changes to how 3D-printed gun specs are regulated were first proposed in May 2018 about two months after the Trump administration agreed to settle a lawsuit with a private company that distributes blueprints for so-called ghost guns. Under the terms of that deal, the Trump administration agreed to remove 3D-printed gun specs from the State Department’s list of regulated munitions.

In his dissenting opinion, Whaley questioned why the government “suddenly and secretly changed course” by agreeing to that settlement after the Fifth Circuit Court of Appeals ruled in favor the State Department and denied Defense Distributed’s request for an injunction to have its blueprints removed from the list.

Prior to the settlement, the State Department had argued that Defense Distributed’s files could be used to create “virtually undetectable” firearms that presented a “serious risk of acts of violence” overseas, including the use of untraceable guns in assassinations and the manufacturing of gun parts for embargoed nations and terrorist groups.

“[Department of State] has never explained why, after securing several victories in the litigation with Defense Distributed, it decided to settle and agreed to permit the export of 3D gun files, even though DOS had argued that the export of these files would irreparably harm the United States’ national security interests,” Whaley wrote.

Whaley also questioned the government’s decision to keep that settlement secret until after a public comment period for the proposed rule changes ended on July 9, 2018. He noted that only a small fraction of submitted comments pertained to ghost guns, but after the settlement was made public, the government was flooded with “over 106,000 emails from concerned members of the public regarding the deregulation of 3D gun files.”

Bybee and Nelson acknowledged some “additional reasons” Whaley cited as to why Congress intended to let courts review decisions to deregulate munitions, but they concluded that Congress never wrote those into the law.

“Congress may decide to codify these policy considerations in the future. But [the law] as currently written does not reflect them,” Nelson wrote for the majority.

Guns printed at home are often referred to as ghost guns because they lack serial numbers, making them untraceable.

In the last several years, a decentralized network of 3D-printed gun advocates has mobilized online and revolutionized gun designs, sharing blueprints, advice and building a community.

As we’ve noted, one online ghost gun community has developed the FGC-9, which stands for “f**k gun control 9 mm.” As we’ve mentioned, the FGC-9 can be printed entirely at home for the cost of $350, including the printer’s cost.

YouTuber Sean with “The 3D Print General” recently attended “Bear Arms N’ Bitcoin” on April 10-11 in Texas. He showed how 3D-printed guns have advanced over the years and can survive thousands of rounds of ammo.

So, for the time being, ghost gun blueprints can be shared online, but it’s only a matter of time before the Biden administration swoops in like a hawk and unleashes executive orders against these untraceable firearms.