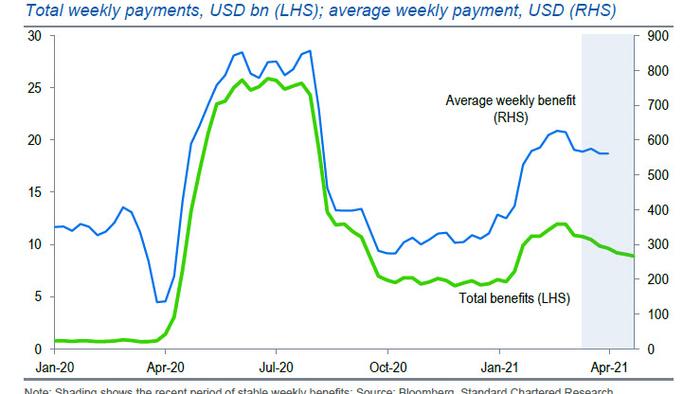 
Early indications point to very strong job numbers for April (due May 7), possibly as much as 1.5 million jobs or more, according to Standard Chartered FX strategist Steve Englander. He bases this estimate on an analysis of unemployment insurance (UI) benefit payments in recent weeks. Average weekly benefits have been very stable since late February, but the amount of spending has dropped sharply since mid-March (Figure 1). By implication, the numbers receiving benefits are probably also dropping.

Englander then translates the drop in benefits to an implied fall in unemployment, and seasonally adjusts the unemployment drop based on past patterns. As a result, he finds that unemployment may have decreased between 1.4 million and 2.0 million from March to April. The wide range emerges because March to April seasonality is very strong and the adjustment factor is very uncertain. However, as he adds, a number in the middle or upper end of the range is more likely than in the bottom half, based on this analysis.

This is how Englander arrived at his estimate

In some ways these data are better than the BLS surveys that generate household and payroll employment estimates. The Treasury publishes its disbursements on UI benefits on a daily basis with only a day’s lag; these data are not a sample but the totality of what is getting paid. Similarly, the insured UI data basically represent the universe of people receiving benefits and the COVID-19 relief measures encompass a very high percentage of those who have lost jobs, so sampling issues are modest.

If the objective is to predict non-farm or household employment, the independence of the Bureau of Labor Statistics surveys from the Treasury spending and Department of Labor benefits data is a disadvantage because the samples may diverge, even if sampling is less of an issue.

Estimating the seasonal factor is the other big risk. In stable periods, seasonal adjustment is largely formulaic; in volatile periods, there is considerable discretion on what is viewed as seasonal. The seasonality in a period of cyclical upheaval is likely to be modest, but there is a wide confidence interval around our estimates.

Some workers can collect benefits for partial work weeks. They would be counted as UI beneficiaries, but the BLS labor survey definition classifies them as working, so the decline in benefits may be higher than the decline in BLS-measured unemployment. On the other side, newcomers to the labor market may not be receiving benefits, so if they found jobs they would count as newly employed without having previously been counted as receiving benefits.