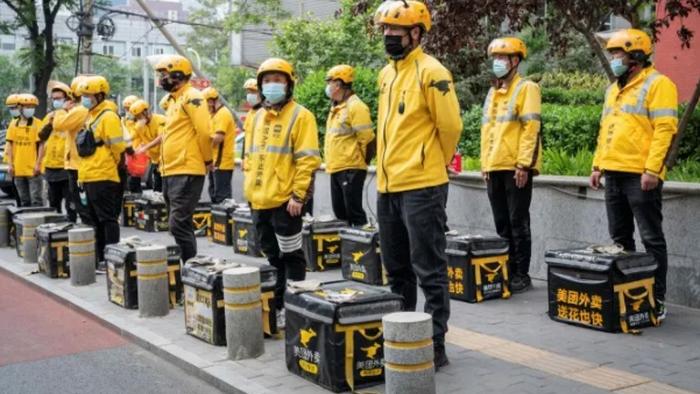 
Two weeks after China’s State Administration for Market Regulation – Beijing’s paramount anti-trust regulator – fined Alibaba a record $2.8 billion for abusing its market dominance, capping off the country’s first major anti-trust action to rein in one of the tech giants dominating the Chinese domestic economy, the CCP has just launched its next major anti-trust investigation.

The SCMP reported that China’s antitrust regulator on Monday officially launched a probe into food-delivery service provider Meituan, citing alleged monopolistic business practices like forcing merchants to “pick one from two” – that is, forcing merchants to either pick its platform as its exclusive distribution channel, or find themselves banned.

The probe reportedly resulted from a public tip. Though it’s not yet known how long the investigation will last, it’s worth remembering that the Alibaba probe was launched on Christmas Eve of last year, and ended earlier this month. Meituan has pledged to cooperate (though of course it has little choice in the matter).

“The company will actively cooperate with the investigation by the regulatory authorities to further improve the level of business compliance management, protect the legitimate rights and interests of users and all parties, promote the long-term and healthy development of the industry, and earnestly fulfill its social responsibilities,” Beijing-based Meituan said in a statement. “At present, the company’s various businesses are operating normally.”

According to the SCMP, this tactic of forcing merchants to choose just one platform is widespread in China, suggesting that the crackdown – like other antitrust actions – is more about humbling China’s upstart tech giants and keeping them subservient to the will of the CCP. The company’s shares declined on the news in Hong Kong markets.

The new probe proves that Beijing’s crackdown on Alibaba and Ant Group wasn’t isolated, and that there will likely be more investigations into other Chinese tech giants before this is over, the SCMP hinted. “It’s not a surprising decision. After Alibaba’s record fine, no big tech players should be immune from monopoly investigations,” said Li Chengdong, the chief executive of e-commerce consultancy Dolphin Think Tank. “The regulators need to also show that the investigation is a fair move for everyone, it’s not only about Alibaba.”

Meituan, which was founded by 42-year-old Wang Xing, has been dragged into court over allegations of unfair competition before. A local court in Jiangsu this month ruled that Meituan had to pay 352,000 yuan ($54,180) as compensation to Ele.me. a food-delivery adversary owned by Alibaba (as fate would have it) for asking merchants to shun the competing service. Aterward, Meituan issued a public statement claiming it wouldn’t make such demands in the future. Another similar lawsuit played out in February. Then, Meituan and 33 other tech companies were brought in front of SAMR and other regulators earlier this month, and given a deadline of May 13 to rectify anti-competitive behaviors, or be “severely punished”. While the company says it doesn’t practice “one of two”, sources told the FT that Meituan practices a more scaled-down approach whereby it lowers commissions on merchants who exclusively use its platform.