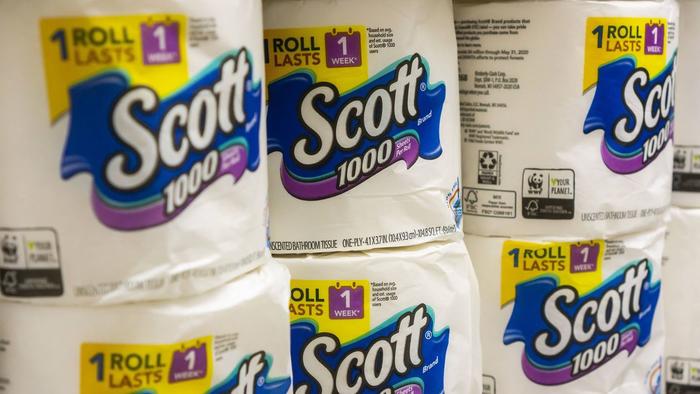 
Maybe its due to the recent fears about a fresh round of toilet paper shortage (with snarled supply chains evoking memories of March 2020 when toilet paper became a precious commodity for a few months) which led to TP stockpiling earlier in the year with demand sliding in subsequent weeks, or simply due to rising prices for all consumer products including toilet paper, but whatever the reason, earlier today Kimberly-Clark shares were hammered after the consumer products giant reported a steep sales declines, signaling what to some is the end of a boon triggered by the pandemic. The company, which earlier this month said it would high prices on many of its core products, also cut its annual forecast as companies are reminded that higher prices lead to lower demand.

Specifically, the company now expects organic sales for this fiscal year to be flat to a gain of 1%, well below its previous projection for an increase of as much as 2%. The company’s full year adjusted EPS guidance was also cut to $7.30-$7.55, lower than an earlier forecast of as much as $8.

So what happened? Well, as the title suggests, with organic sales down 8% last quarter, almost doubling the decline projected by analysts, the company was hard-hit by decelerating sales of toilet paper and a lagging professional business. Specifically, the company’s consumer tissue unit (i.e., toilet paper) saw a 12% decline, while operating profit fell by 26%. In North America, the company’s biggest market, sales of tissue dropped 14%.

To be sure, KMB – and many of its thriving peers – finds itself in a strange place: after a year of chasing demand, the company is suddenly grappling with higher manufacturing costs… and a plunge in demand for its products. Earlier this month, the company said it was raising prices by mid-to-high single digits on its Scott tissue business and diapers. The move may have been premature.

Meanwhile, as Bloomberg notes, Kimberly-Clark’s guidance – predicated on successfully passing through higher prices – signals a tough road ahead for consumer goods companies that flourished on surging demand during the pandemic. Indeed, as at-home consumption wanes, the company expects revenue to contract amid rising commodity costs.