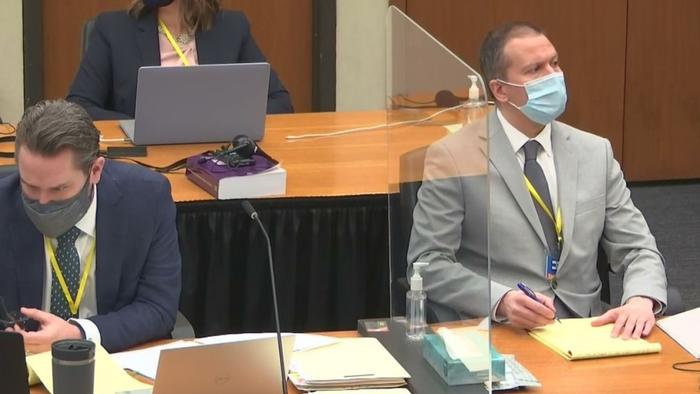 
After nearly three weeks of witness testimony and evidence that has seen the very nature of George Floyd’s death disputed by both the prosecution and defense, lawyers for both sides will give their closing arguments on Monday.

Readers can watch the closing arguments below:

Afterwards, jurors will be sequestered for deliberations that could take hours, minutes or even weeks. They could offer up a guilty or not-guilty verdict on charges of second- and third-degree murder, as well as manslaughter.

Over the weekend, black politicians and civil rights attorneys fanned out to give interviews that carried a similar message to Rep. Maxine Waters’ spirited (or impeachment-worry, as some might say) comments to protesters/rioters in Brooklyn Center, Minnesota, (which preceded targeted drive-by shootings against police).

Civil rights attorney Benjamin Crump, who is representing the families of Floyd and Daunte Wright, the 20-year-old fatally shot by a Minnesota police officer who claims she was reaching for her taser, put a spin on Waters’ message, saying protests would remain “emotional” (an interesting euphemism for “violent”) unless Chauvin is found guilty. “We cannot condone this inhumanity America, we cannot condone this evil that we saw on that video [of Floyd’s arrest],” Crump said during the Sunday morning interview, warning that if the trial’s outcome doesn’t set a new precedent, “people are going to continue having these emotional protests.”

Rep. Karen Bass, who, like Waters, is also a member of California’s overwhelmingly Democratic Congressional delegation, appeared on CNN’s “State of the Union” and said she expects a wave of outrage if Chauvin is acquitted on all three counts, adding: “We’ve seen people get off with minimal sentences” in “too many of these cases.” “I don’t think anyone in Minneapolis, frankly anyone in the U.S., and over a good part of the world, would understand any verdict other than guilty.”

Rep. Karen Bass on police reform: “All communities deserve to be protected and served by law enforcement and you shouldn’t have law enforcement that protects and serves one community and acts as though they’re in a war zone in another community … that’s what we have.” #CNNSOTU pic.twitter.com/KTsmzXLdkz

Whatever happens to Chauvin, the public has already moved on to new acts of police violence, including the killing of Wright, and the shooting of Adam Toledo, a 13-year-old shot and killed by Chicago Police last month.

Of course, it’s not just Derek Chauvin’s fate that’s about to be decided here. Jonathan Turley, a Constitutional Lawyer and legal writer, explained in USA Today how the cases against Chauvin’s fellow officers would likely collapse if Chauvin is acquitted.

The trial of former police officer Derek Chauvin in the death of George Floyd is scheduled to begin March 29 after the difficult task of selecting a jury. The difficulty is not in finding a jury that reflects the community but finding one that does not. And it became even more difficult Monday when Minneapolis announced a $27 million settlement in a civil suit brought by Floyd’s family.

One juror had been dismissed by then after he admitted that he feared he or his family would be harmed if Chauvin was acquitted. Another was dismissed after saying property damage during Black Lives Matter protests might have been necessary to achieve justice. Their problem was that they reflected their community all too well.

Judging from the encampment around the courthouse with barbed wire, fencing and security, authorities are aware of the potential for violence. The greatest threat, however, could be found in how the prosecution has structured the case – and the danger of a cascading failure of not just the Chauvin case but of the cases against all four officers.

An unstable and vulnerable strategy

The prosecutors constructed the cases against Chauvin, Alexander Kueng, Thomas Lane and Tou Thao like an upside-down pyramid resting on a conviction of Chauvin. The main charges against Kueng, Land and Thao are as aiders and abettors to Chauvin’s alleged murder or manslaughter. If Chauvin is acquitted or the jury hangs on the charges, the prosecution of the other three officers becomes extremely difficult.

There are some very significant challenges for the prosecution, even with the infamous videotape of Chauvin with his knee on Floyd’s neck for more than 9 minutes. There is a palpable fear that even mentioning countervailing defense arguments will trigger claims of racism or insensitivity to police abuse. However, the jury must unanimously convict on the basis of beyond a reasonable doubt after considering a variety of such arguments, including:

Serious challenges in proving this case

These facts do not negate a claim of manslaughter since Floyd was clearly in distress, and Lane suggested that the officers move Floyd in light of his complaints. Chauvin overruled that suggestion.

Even with a manslaughter conviction, however, the case against officers like Lane would be difficult. Lane is shown as the officer who first confronted Floyd after he refused to show his hands. Lane yelled at Floyd to show his hands. After Floyd replied, “Please don’t shoot me, man,” Lane said, “I’m not shooting you, man.” Later, when Floyd struggled not to get into the police car and said he cannot breathe, Lane is heard offering to sit with him, roll down the windows and turn on the air conditioning. It is also Lane (who had only been on the force a couple days) who encourages Chauvin to move Floyd from the knee restraint position.

Lane might never see a trial if the case against Chauvin fails and causes a cascading failure. Not only could Chauvin be acquitted or left with a hung jury, but the impact could be the collapse of all four cases. That will be up to the jury. But if there is violence after the verdict, it will be far worse if the public is not aware upfront of the serious challenges in proving this case.

Weaponizing The Pursuit Of Profit: Rubio Warns Of ‘Extraordinary’ Leverage Held By China Over American Companies