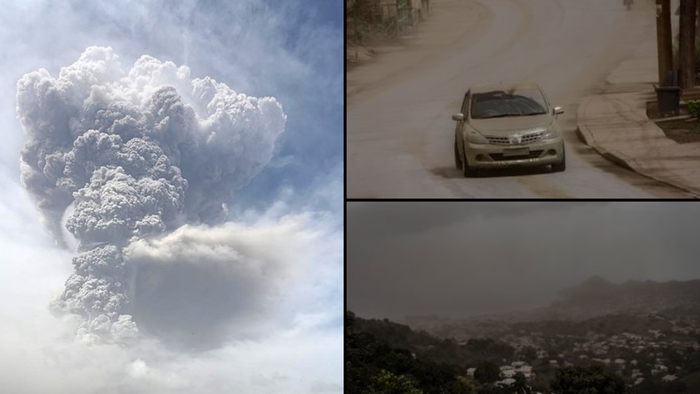 La Soufriere volcano has been erupting nearly every day – and sent ash columns into the air, as well as other volcanic material flowing down the mountain.

St Vincent’s Central Water and Sewage Authority has been unable to extract water from its traditional sources since the last Friday’s eruption, Marshall said, which has halved water reserves by 50%.

According to AP, between 16,000 to 20,000 people have been evacuated from the island’s northern region, where the volcano continues to erupt. At one point, cruise ships were evacuating thousands of people to other islands but were only taking people who had previously been vaccinated against COVID-19. Still, there are thousands of evacuees that reside in government shelters.

At the moment, the island is completely covered with ash from the volcano. This poses a very serious question, one which a humanitarian crisis could be in the making. Volcanic ash has contaminated water supplies and wiped out crops.

Prime Minister Ralph Gonsalves told a local television station that hundreds of millions of dollars in aid is needed to recover from the natural disaster.

Thousands of people on the island are desperate food and clean drinking water. Every day this week, people stand in long lines to receive water and food to survive. Besides the humanitarian crisis, there’s also an economic impact that is quite severe considering the island nation’s economy is heavily dependent on agriculture, being the world’s leading producer of arrowroot and other exotic fruit, vegetables, and root crops. If a substantial amount of crops are wiped out, this could create a shortage and boost food inflation.

“No water, lots of dust in our home. We thank God we are alive, but we need more help at this moment,” Paul Smart, a retired local police, told AP.

43-year-old Jenetta Young Mason told Reuters, “We are still looking for drinking water and food.” She had to flee her home due to multiple eruptions.

On Monday, the spokesman for United Nations Secretary-General Antonio Guterres said most of the population on the tiny island is without electricity or clean drinking water.

Stephane Dujarric, the Spokesperson for the United Nations Secretary Antonio Guterres, said tens of thousands of people are in need of shelters.

“The eruption has affected most livelihoods in the northern part of the island, including banana farming, with ash and lava flows hampering the movement of people and goods,” Dujarric said during a briefing.

The World Bank has distributed $20 million to St. Vincent as part of an interest-free catastrophe financing program.

While volcanic activity at La Soufriere may last for days or weeks, the volcano is “still pretty dangerous”, Richard Robertson with the University of the West Indies Seismic Research Center told AP. “It can still cause serious damage.”

In a matter of days, the entire Caribbean island is on the verge of a humanitarian crisis. We all remember Puerto Rico’s post-Maria water/health care crisis several years ago. Let’s hope that doesn’t happen in St Vincent.