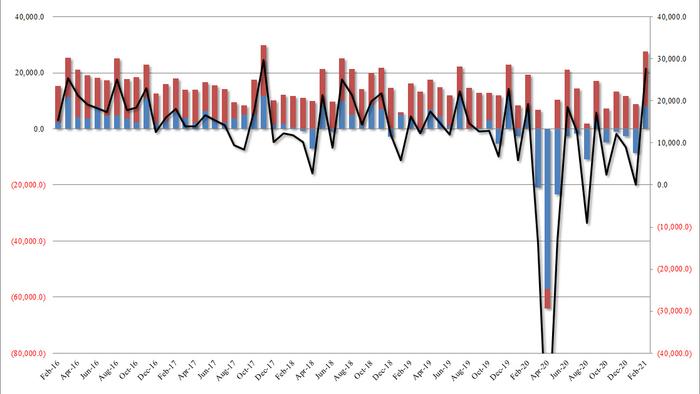 
Earlier this week, when looking at the latest BofA card spending data, we observed that “whereas previously the bulk of the upside spending game from debt card outlays, in recent weeks we have seen a solid increase in credit card spending as well as consumers turn more optimistic on their financial futures. This means that the period of credit card deleveraging that market much of 2020 is now officially over.”

Turns out this was once again prescient, because while consensus expected today’s consumer credit print to rise by just $2.8BN after four consecutive months of credit card paydowns to end 2020 and the first month of 2021, moments ago the Fed reported in its latest monthly G.19 statement that in February consumer credit exploded by a whopping $27.6 billion, which not only was the highest monthly increase in the series since November 2017…

… but was about 10x higher than the expected number of $2.8BN, making it the biggest beat on record!

And while non-revolving credit – i.e., student and auto loans – continued its relentless ramp higher, increasing by $19.5BN in February, the most since June of 2020…

… it was the surge in credit card debt in February that made all the difference because after 4 months of paydowns, revolving (i.e. credit card) debt surged by $8.1 billion, the most since December 2019!

This latest shift in spending patterns, means that things are now indeed almost back to normal, and that with consumers now spending not just using their debit cards (which is where the stimmy checks arrive) but their credit cards, it appears that Americans are increasingly more confident about the future, and are spending appropriately.