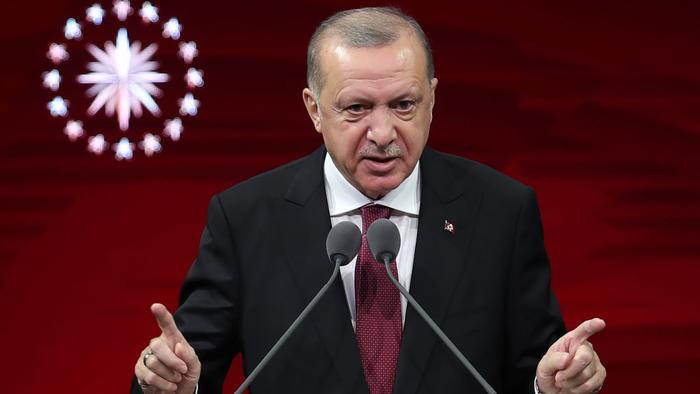 
Authored by Giulio Meotti via The Gatestone Institute,

“It was pilgrimage time to Mecca and, due to the pandemic, no one was there! It was the anniversary of the Treaty of Lausanne, the origin of modern Turkey within its current borders. Erdogan was about to twist the arm of the secular Ataturk, who had turned the old Hagia Sophia basilica into a museum that he had donated ‘to humanity’. Erdogan… turned it back into a mosque”.

This was the moment, remarked Kepel – who just published a new book, “Le Prophète et la Pandémie” [“The Prophet and the Pandemic“] — that Turkish President Recep Tayyip Erdogan became the new leader of the umma, or global Islamic community. “Erdogan is trying to appear as the champion of Islam, just like Ayatollah Khomenei in 1989”.

Both Khomeini and Erdogan seem to have been committed to erasing secularism and ties with Western culture from their respective countries; to heading a battle against Saudi Arabia for supremacy of the Islamic world and to re-Islamizing their societies. Veiled women, for instance was rarely seen in Tehran before Khomeini, and Erdogan reintroduced it into Turkish society.

The Iranian mullahs were also able to impose on the international arena the use of the word “Islamophobia”, but now it is Turkey that is leading the ideological persecution of the “Islamophobes”. Under the auspices of Turkish diplomat Volkan Bozkir, President of the 75th Session of the United Nations General Assembly, the UN just celebrated the “International Day against Islamophobia” and Secretary General Antonio Guterres himself strongly denounced an “epidemic of Islamophobia“. Erdogan was promoting his global campaign of victimization by “Islamophobia”, while in fact it is the critics of extremist Islam who are in danger and frequently killed.

This grotesque and shameful conference was organized by the Organisation of Islamic Cooperation (OIC), an entity made up of 56 mainly Muslim countries, plus “Palestine”. In the OIC, states such as Pakistan punish “blasphemy” with death; Saudi Arabia flogs and jails liberal bloggers such as Raif Badawi, and Turkey fills its jails with writers and journalists, to mention just a few of members.

On that July 24, in 2020,, Erdogan challenged Europe and the West by re-appropriating what had been, for a thousand years, the largest church in Eastern Christianity. The lack of response on the part of the West most likely convinced him that the moment was right. No one paid attention or countered the act.

Unlike Iran and Saudi Arabia, Turkey is a democracy. It is in talks with the European Union about its possible membership; it is pampered in Washington; it is the second-largest army in NATO, and stands as Asia’s gateway to Europe.

The Financial Times (FT) has dedicated a series of analyses to Erdogan’s grand plan for hegemony. In Africa, for the past 15 years, for instance, the Turkish president has spearheaded a mega-relaunch of his alliances. Since 2009, Turkey has increased the number of embassies there from 12 to 42. Erdogan has even been a frequent visitor, making trips to more than 20 capitals. The government has set itself the goal over the next few years of doubling Turkey’s trade volume with Africa to $50 billion, about a third of its current trade with the European Union.

Turkey has also chosen the Balkans as a battlefield — “the region,” according to the FT, “is symbolically very important, since much of it was ruled by Istanbul during the Ottoman Empire”. Then, there is Europe:

“Several European countries have voiced concern over activity by Turkey’s intelligence service on their soil and the use of state-trained Turkish imams to spy on the diaspora”.

Erdogan’s goal in Europe seems to be to use the Turkish diaspora as a political instrument of pressure on states (in particular Germany, France, Austria, Belgium and Holland) and as the base for his hegemony.

In the Caucasus, Turkey supported Azerbaijan’s war against Armenia in Nagorno-Karabakh presumably to create a Turkic-Islamic corridor between Azerbaijan, Turkey and other Muslim countries. Erdogan also apparently makes use of mercenaries. The Indian media reported a contingent sent to Kashmir to support Pakistan. Turkey has also previously used “Sadat” mercenaries against the Armenians, as well as in the Libyan and Syrian civil wars.

In the latest issue of the Reveue des deux mondes, the French philosopher Michel Onfray remarked that there is a clash of civilizations and that Erdogan now leads the Islamist side. “It began in 1989 with the fatwa against Salman Rushdie,” he wrote.

“No Western country reacted except with words – as if they thought a verbal spell might work! With the beheading of Professor Samuel Paty it is this Judeo-Christianity that is being attacked — in Armenia, Islam is attacking the oldest Christianity in Europe …. Europe is afraid of Erdogan and his ability to cause damage. This Tamerlane in the making threatens, insults, attacks, [and] supports those who threaten us, insult us and attack us”.

That, Onfray continues, was the meaning of the Turkish aggression against Karabakh:

Erdogan has not even tried to hide his ideological vision. “The crescent and star embellish the skies of Karabakh now thanks to the efforts of our Azerbaijani brothers and sisters”, the Turkish president proclaimed after the war. “The Azerbaijani flag flies proudly over Nagorno-Karabakh as a symbol of our martyrs’ valor”.

Turkey evidently wants to be a great neo-Ottoman Emipire and the only one capable of leading the Muslim world. The conversion of Hagia Sophia into a mosque seems to have been intended as a watershed in Islamic history that heralds the establishment of a powerful league of Muslim nations to face the West under the Turkish leadership.

“Blue Homeland” — Mavi Vatan in Turkish — is the geopolitical concept that marks Erdogan’s agenda for the coming years. Conceived by nationalist Admiral Cem Gurdeniz, it is the “diplomacy of drills and warships” that pursues “the return of Turkey to the sea, the union between Anatolia and the eastern Mediterranean”. The goal is clear: to control the sea, to control energy resources and to impose its influence. Erdogan announced that it will no longer be called “Aegean”, but the “sea of ​​islands”.

Ankara is on a collision course with Greece and Cyprus over who has the right to exploit the eastern Mediterranean’s oil and gas deposits. “They will understand that Turkey has the political, economic and military power to tear up immoral maps and imposed documents,” Erdogan said.

Turkey has problems with Cyprus, which, unlike the Turks, belongs to the European Union but not to NATO. Turkey, which invaded the island in 1974, remains the only country to recognize Turkish-occupied Northern Cyprus as a state. The Republic of Cyprus, which is majority-Greek Cypriot, wants to make deals with foreign energy companies, while Turkey, to the island’s north, wants economic rights in the waters that Cyprus considers its own.

While the new sultan extends his influence to Syria, Libya and the Caucasus, he also extends it within the Mediterranean. For pacifist Europe, that sea only exists when it comes to bringing in migrants.

President Erdogan, in an official visit to Paris on January 5, 2018, proceeded to launch this provocative phrase to the leaders of the French Council for Muslim worship: “The Muslims of France are under my protection”. Those were the first lines of an inquiry by the France’s Journal du Dimanche. Several reports sent to the Elysée Palace by the Directorate General for Internal Security (DGSI), which the newspaper was able to consult, reveal the scope, forms and objectives of a “real infiltration strategy” through networks managed by the Turkish embassy and the Turkish spy agency, the MIT. “They act mainly within the Turkish immigrant population, but also through Muslim organizations and also recently in local political life, through the support given to elected officials”.

“These actions have different objectives,” commented the journalist Mohamed Sifaoui.

“First, to improve the image of the Turkish regime in the diaspora and in French society. Then, to defend Erdogan’s image at all costs. And finally, of course, the spread of an Islamist vision of Islam”.

Sifaoui cites as an example the latest charter wanted by French President Emmanuel Macron, the charter of principles present in the law that strengthens “republican principles,” and is currently being examined by Parliament:

“It was not signed by the two Turkish federations, at the request of Ankara, because it is a charter that recalls the fundamental principles important for the Republic and which the Turkish regime clearly opposes… What the Turkish regime is doing is using its diaspora as a Trojan horse.”

The Brookings Institution wrote in 2019:

“According to the [French] ministry of interior, 151 imams have been sent by Turkey (which has undertaken a spate of religious outreach to Muslims across Europe over the past decade)…”

Just as Turkey controls 400 mosques out of 2,500 in France. It is Ahmet Ogras, apparently close to Erdogan, who for two years occupied the symbolic position of president of the French Council for Muslim Worship — as Turkish voters in France are generally more pro-Erdogan than in Turkey. During the presidential elections of 2014, Erdogan won 66% of the votes cast by Turkish citizens in France, compared to only 51.79% in Turkey. First- and second-generation Turkish immigrants in France continue to watch Turkish television, which is extremely submissive to Erdogan’s power. In French public schools, 180 teachers, directly appointed by Ankara, are responsible for teaching the Turkish language.

These efforts make up the great project of conquest by Erdogan the Islamizer.

Erdogan recently withdrew Turkey from an international treaty on preventing violence against women. With this decision, it seems that the president is determined to increase impunity around murder of women and “honor killings”, which common in Turkey.

In Erdogan’s Turkey, school textbooks have been rewritten to refer to Jews and Christians as gavur, “infidels,” according to a new study published by the Institute for Monitoring Peace and Cultural Tolerance in School Education (IMPACT-se). Earlier Turkish textbooks referred to the members of the two religions as the “peoples of the Book”. “School books have been used as a weapon in Erdogan’s attempts to Islamise Turkish society and to trace back to a nostalgic era of Turkish domination,” wrote IMPACT-se’s CEO, Marcus Sheff.

These are some of the findings of the study: Jihad was introduced in textbooks and transformed into the “new normal”, with martyrdom in battle glorified. Ethno-nationalist religious goals of neo-Ottomanism and pan-Turkism are taught. Therefore, Islam is described as a political issue, with science and technology used to further its goals. There is an emphasis on concepts such as “Turkish world domination” and “Turkish or Ottoman ideal of world order”. According to the curriculum, the “Turkish basin” extends from the Adriatic Sea to Central Asia. The curriculum adopts an anti-American stance, and shows sympathy for the motives of ISIS and al-Qaeda. Turkey takes anti-Armenian and pro-Azerbaijani positions. The identity and cultural needs of the Kurdish minority continue to be largely neglected. The pogroms of 1955 against the Greek community in Istanbul are ignored.

At schools, during the term of Erdogan, maps showing Turkish power have appeared. Reference is made to the “Turkish heritage from the Adriatic Sea to the Great Wall of China”: “Turkish cultural artifacts can be seen in a vast region, starting with the countries of Central and East Asia, such as China and Mongolia, and extends to Herzegovina and Hungary…”

“We are a large family of 300 million people from the Adriatic to the Great Wall of China,” Erdogan said in a speech from Moldova.

Europe, the US, NATO and the Free World might start worrying. Erdogan seems aiming to be the new Islamist wolf in sheep’s clothing.