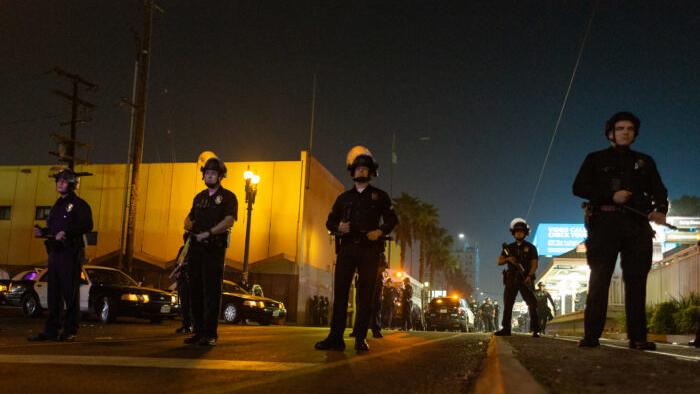 Officers with the Los Angeles Police Department (LAPD) were attacked with smoke bombs, bottles, and rocks on March 24 as they attempted to clear out a homeless encampment at a park, according to video footage and the LAPD.

“Two unlawful assemblies were declared and dispersal orders were issued at Santa Ynez Street and Glendale Blvd due to officers being assaulted with rocks, bottles, and smoke bombs. Fencing is being installed and police will be there overnight,” the LAPD wrote in a tweet on March 24, adding that officers attempted to clear out Echo Park.

They were met with left-wing protesters, according to video footage of the incident.

The homeless camp has been criticized by citizens who live in the area, prompting the city to say it would move those living in the park to hotels, according to the Los Angeles Times.

Homeless residents say they have a right to stay in the park, which is public property.

“No one else may enter. 24 hr notice for those in the park to leave. Housing resources are being provided to everyone,” Los Angeles Police Chief Michel Moore wrote in a March 24 tweet.

Our people remain in the area around Echo Park tonight as fencing is installed. Those already inside the park in tents will be allowed to remain overnight. No one else may enter. 24 hr notice for those in the park to leave. Housing resources are being provided to everyone

“The Los Angeles Police Department continues to ask for calm and cooperation as the installation of fencing in support of the Echo Park rehabilitation effort continues. Unfortunately, officers have received projectiles and refusals from individuals blocking streets in the area,” the LAPD wrote on Twitter.

Police told KTLA that there was misinformation being spread that officers deployed “tear gas” during the incident, saying that it was instead smoke caused by smoke bombs that were being used by anti-police demonstrators.

This is literally you right now.

The left-wing activist group People’s City Council—Los Angeles wrote of the demonstrations: “YALL ITS GOING DOWN IN ECHO PARK.”

CALL TO ACTION! Show up tonight at 5 pm and stand in solidarity with the residents of Echo Park Lake! It’s going to go down tonight. We need a critical mass. Please show up. #EchoParkRiseUp pic.twitter.com/J6S5g5ffgK

Edward Juarez, a homeless resident, said he has been living in a tent at the park after he lost his job due to the COVID-19 pandemic and associated government-mandated lockdowns. Juarez said he was a photographer at events and concerts, which were closed down amid the lockdown orders, the LA Times reported.

“I just want to get out of here, it’s getting crazy,” he said of the scene.

“The pandemic has not even been lifted and they’re trying to evacuate people who have nothing anymore,” another homeless person, Jessee Mendez, said to KTLA.

Residents have told local outlets that the park is no longer a safe place for children, as they’ve found needles and numerous other health hazards.

A Change.org petition states that Echo Park is “virtually unusable” and is “becoming Skid Row,” referring to the downtown Los Angeles area where a number of homeless people and drug addicts live.

“As of late, activists and the current Los Angeles leadership, have sought to let unhoused peoples use all of the lake facilities and land for housing- Instead of using the $1.2 billion in Prop HHH funds we the voters approved to construct housing for the unhoused (None of which has been built),” the petition states.