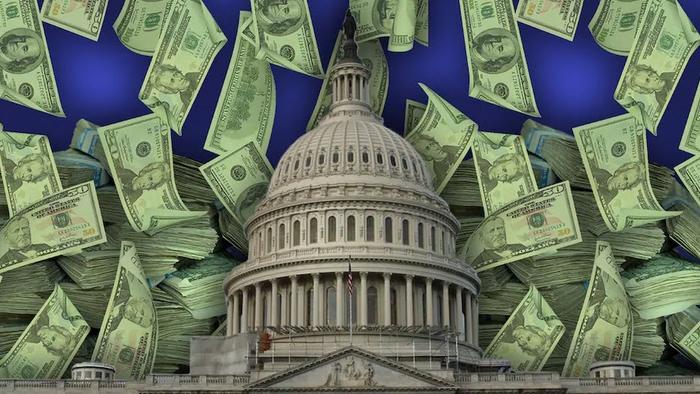 
Authored by Mark Glennon via Wirepoints.org,

An astonishingly sweeping, radical movement to level cities and states is underway, propping up the failures and pounding down those that have been successful. Most everything is being federalized. The role of cities and states as we have known them – as laboratories of democracy – is being eviscerated. It’s being financed by both the United States Treasury and the Federal Reserve bank, which are now joined at the hip in fiscal profligacy.

Much of it is proceeding under the false labels of pandemic relief and fiscal stimulus. It’s happening at such a rapid pace that the paper of record for government overreach, The Washington Post, fears that “the sheer volume of new programs threatens to swamp federal agencies.”

It’s a fundamental and historic remake of America, though its impact hasn’t yet come close to sinking in. Some of the numbers that follow seem beyond belief, but they are real. If claiming that pending legislation will destroy America as you know it seems like exaggeration, read on to see what its supporters say, because it’s their commentary that is most revealing.

The plan to federalize government is already moving and has three parts:

Let’s go through each.

Flood every unit of local government with federal cash, irrespective of need, while prohibiting tax cuts, thereby bailing out failing states and cities:

Start with the recently signed ARP, the American Rescue Plan. Its scope is under-reported and the public is unaware. Having been routinely styled as coronavirus relief or economic stimulus, it’s perhaps the most blatant bait-and-switch in American history.

Wages and salaries during for the first ten months of the pandemic dropped by only 3.4% from the same period in the red-hot economy we had before then, or $276 billion in lost wages. That’s from former U.S. Director of the Office of Management and Budget David Stockman. Same for the hit to Gross Domestic Product, which also dropped by the same percentage, a reduction of about $775 billion.

But ARP together with federal money already delivered is about $6 trillion! Even if you want to count everything, the bailout total is 7.7x the size of the problem, wrote Stockman.

Don’t think that might ease your state and local tax burden. The downpour of cash on cities and states, most of which don’t need it, is all tied to a provision in ARP that bans tax cuts. It’s a mandate for statism – big government – whether states with small government philosophies like it or not.

“Thou shalt be statists and big spenders,” that’s what ARP might as well say as a direct federal mandate.

Most of ARP commentary about cities and states has wrongly focused only on the $350 billion that’s will go directly to them. That’s a small part and entirely misses the bigger picture.

Illinois is an example. Its share of that $350 billion is $13.2 billion. But what’s the true amount that will come to Illinois under ARP?

None of that includes the the cash handouts coming in the mail soon, which are still more costly. Payments up to $1,400 for adults and any dependent are on the way, subject only to very high income limits. Only households with earnings of more than $80,000 for single filers, $120,000 for head of households and $160,000 for married filing jointly will not receive any payment.

Add it all up and you have more spending on “COVID relief” than America spent to win World War II, inflation adjusted.

And it’s not a one-year effort.

Make the flood of federal money regular and permanent.

Most of the flood of federal cash, supporters expect, will continue permanently. Look at what the left’s pundits say:

For now, these changes to the [child tax credit] are set to expire after a single year. But Democratic leaders intend to make the program permanent. (The apparent strategic logic of making it temporary goes like this: Making the child allowance permanent in the relief bill would have pushed its price tag above $2 trillion, thereby endangering moderate support. But once moderates are faced with a choice between voting for an expensive extension of the policy and allowing every family in America to simultaneously see their disposable income shrink right before a midterm election, they will rally behind “big government.”) The Democrats’ fiscal philosophy is now apparently “There is nothing to fear but fear of deficits itself.”

Black farmers will receive over $4 billion in what looks like a step toward reparations. There’s a huge expansion of health insurance subsidies. Many of these changes, like the child tax credit, may well become permanent. This moment is like 1981, the dawn of the Reagan Revolution, except in reverse. It’s not just that government is heading in a new direction, it’s that the whole paradigm of the role of government in American life is shifting.

Yup, K-12 education, higher education, welfare programs, reparations and more – it’s all to be federalized and made permanent, subject to federal rules. Those changes include ending work requirements for welfare that were added by the Clinton Administration.

Based only on the things Democrats have said they want to make permanent, the total cost of ARA would, over ten years, reach $4.1 trillion with interest, according to the Committee for a Responsible Budget.

Bailing out public pensions would add more to the bill, and that’s in the cards, too. ARP includes $86 billion to rescue private sector multi-employer retirement funds with no demands for reform and, as a Wall Street Journal editorial put it, “This is the first of many such air-drops to come.”

Annul or override state laws that make certain states competitive, thereby eliminating their competitive advantages, and federalize elections to make it all permanent.

Here is where the ban on tax cuts comes in. Keep taxing and spending as you have been – that’s the universal mandate under ARP – then also spend the cash the federal government is dropping like manna from heaven. Today’s well-run states will thereby loose much of their competitive advantage.

Additional pending federal legislation specifically aims to deprive thriving states of what has given them comparatively advantage.

First, there’s the what the Wall Street Journal called the most radical pro-union labor bill since the 1935, which would erase right-to-work laws in 27 states.

A federal gun control law has already passed the House.

Finally, and most importantly, there’s perhaps the most pernicious bill proposed in modern history: H.R. 1, the “For the People Act.”

It would strip state governments and local election boards of power to run our elections, federalizing the election process. It would mandate same-day and automatic voter registration, and encourage vote trafficking of absentee ballots. It would be the end of voter ID laws and restrict efforts to verify voter registration lists. It would create a public funding program for candidates running for Congress. It would put new regulations on political speech and activity, by activists, candidates, civic groups, corporations and nonprofit organizations. Membership in organizations the left doesn’t like would be disclosed, leading to harassment and intimidation.

The average American is no doubt unaware of how extreme all of this is, and how quickly it is moving. Polls say support for ARP is very high, probably because people are aware of little more than the checks now on their way to them. They’ve been bribed with their own money, never considering that they and their children will have to repay most of it.

Pouring gasoline on that fire is the Federal Reserve Bank, the U.S. Treasury’s partner in profligacy. It will create out of thin air some, but not all, of the funds needed to federalize so much, though the long-term consequences are unknown. They’ve embarked on the biggest monetary experiment in American history.

Henry Kaufman is a venerable voice from the past on fiscal and monetary issues. He concludes a soon-to-be released book with this, as reported by Barron’s:

With the federal government and the Fed firmly joined at the hip, the transformation of capitalism into statism is gaining momentum, perhaps irreversibly. Not only is this a great departure from the vision of America’s founders, I suspect it is also not the kind of economic system most Americans living today want to leave for future generations.

How can that switch to statism be happening with so little public attention?

Conservatives and Republicans in Congress bear part of the blame. They haven’t been getting dire warnings out as aggressively as they should. They also bear partial blame for earlier relief measures, parts of which were overbroad, poorly targeted and riddled with fraud, which formed part of the federalization. Politico is right when it said “Republicans…never bothered to train the full fury of their fire at a series of provisions that took the nation several steps down the road to social democracy.”

If they have any excuse, maybe it’s because they have been caught flat-footed. Who could have thought that anything so extreme could be attempted by leftists who hold so thin a majority in Congress?

We are stunned, too. At Wirepoints, we’ve long heard second-hand that many Illinois politicians who ignore the state’s pension crisis say, in private, that they expected the problem to be eventually federalized – that was the term we heard they used. We knew that attempt was coming but we never suspected that a plan so drastic, to federalize so much, would ever be considered.

Make no mistake about the historical gravity of what is taking place. States as the laboratories of democracy are being shut down and replaced with a national juggernaut more overbearing than most Americans have ever imagined.

It was Justice Louis D. Brandeis in 1932 who famously described the virtue of our system. “It is one of the happy incidents of the federal system that a single courageous state may, if its citizens choose, serve as a laboratory; and try novel social and economic experiments without risk to the rest of the country,” he wrote. “To stay experimentation in things social and economic is a grave responsibility. Denial of the right to experiment may be fraught with serious consequences to the nation.”

Destruction of that right is precisely what is happening.

Wake up, America. At all cost, this movement must be stopped and, insofar as it has already succeeded, it must be reversed.