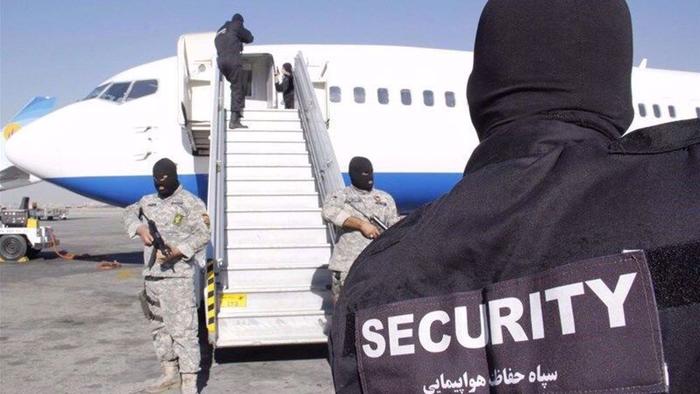 
A bizarre story circulating widely in Iranian state media sources says the country’s elite Islamic Revolutionary Guard Corps (IRGC) thwarted a rare attempt to hijack a passenger plane soon after it took off from an airport in the southwest city of Ahvaz.

An IRGC statement said a terrorist targeted an Iran Air Fokker 100 regional commercial jet that was bound for the northwestern city of Mashhad, and tried to force it to fly south across the Persian Gulf. The incident reportedly happened Thursday and resulted in the plane making an emergency landing at Isfahan Airport in the central part of the country.

There were no casualties or injuries reported, and few details given, but only that IRGC operatives neutralized and arrested the would-be hijacker during the flight, which the government statement described has having sought to divert to the “southern shores of the Persian Gulf.”

As The Times of Israel observed in reporting it, that description “would include the countries of Bahrain, Saudi Arabia and the United Arab Emirates, three nations long suspicious of Iran’s intentions in the wider region.”

“The noble and heroic nation of the Islamic Iran is informed that with the grace of God, the conspiracy to hijack a Fokker 100 aircraft belonging to Iran Air… which had taken off from Ahvaz airport to the holy city of Mashhad at 22:10 hours Thursday night was neutralized with the vigilance of the IRGC’s flight security team.”

The military says it continues to investigate “dimensions and angles of the conspiracy”.

Some of #Iran‘s media outlets–including IRIB & Mostaghel–are using this photo in reporting about the hijacking of the flight from Ahvaz to Mashhad yesterday that appears to be years old per a reverse image search. 🤔 pic.twitter.com/xSHvQBTto4

In the past when there are unexpected terrorist disruptions in the country, Tehran has quickly laid blame on foreign plots and attackers, including routinely pointing the finger at Israel and Saudi-sponsored operatives.