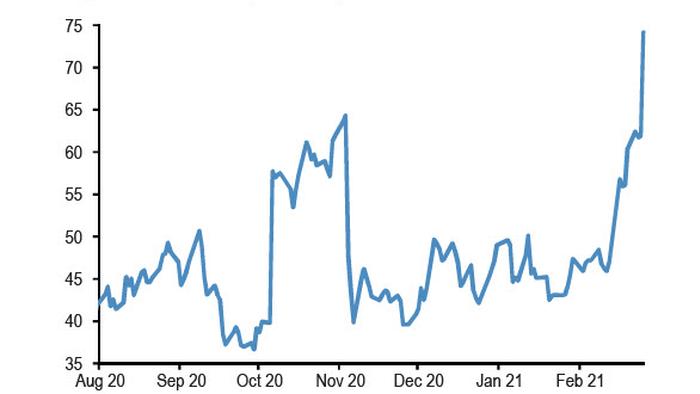 
It was just last Tuesday when he presented our readers with the latest observations from JPM quant Nicholas Panaigrtzoglou, who warned that the rapid rise in bond-equity correlations…

… was bringing memories of previous violent bond tantrum episodes, including Bernanke’s famous Taper Tantrum from May-June 2013, the Bill Gross-inspired Bund tantrum of May-June 2015, the period into the US election Oct-Nov 2016, Feb 2018 and Q4 2018. All of those ended with pain for both bond and equity longs, and certainly risk parity and 60/40 balanced funds who were crushed on both long legs.

Well, just two days later this warning was realized as we saw a surge in bond volatility as global bond prices plunged and yields soared as the latest inflation scare finally came to the fore (catalyzed by the catastrophic 7Y auction which sparked massive liquidation volumes across the curve).

And, as Panigrtzoglou writes today, the surge in the bond-equity correlation together with the increase in volatility is putting even more pressure on multi-asset investors, such as risk parity funds and balanced mutual funds to de-risk (something we also discussed last Thursday in “Vol, Correlation Massacre Means Capitulation Is Just Starting“).

And though we now know what catalyzed last week’s furious liquidation in rates, the question everyone is asking is whether the puke is over. And while some, such as the Nomura quant who correctly called both the early CTA liquidation and shorting that sparked last week’s rout now believe that the worst is over and CTAs are are now covering their shorts, Friday’s action which saw stocks closely sharply at their lows suggests that few are convinced.

Which brings us to the key question posed by JPM’s Panigirtzoglou, namely “what conditions are needed for the current episode to subside and for equity and risk markets to resume their uptrend?”

He then proceeds to answer his  own question, the lesson from the previous positive bond-equity correlation episodes of May-June 2013, the Bund tantrum of May-June 2015, the period into the US election Oct-Nov 2016, Feb 2018 and Q4 2018, is that there are two main conditions:

Neither of these should come as a surprise to our readers. After all just last Sunday we laid out the week’s events clearly, when we proposed the opposite question, i.e., “Are Yields About To Blast-Off: Here Are The 3 Things To Watch“, concluding that “the aptly named MOVE index is the best real-time measure of potential runaway yields.” And sure enough, just days later the MOVE exploded to the highest level since last March’s bond crash.

So now that what the two critical conditions that must be present for a return to normalcy, the next question is “how could these conditions be achieved.” Here JPM envisages four scenarios.

A) The Fed intervenes by raising its bond buying pace in a similar fashion to March 2020. At the time, the Fed justified its intervention by seeking to restore functioning in rate markets. Thus far at least, this argument does not yet appear justified at the current level of market stress according to JPM, although as we noted earlier, BofA is already convinced that the Fed may address nervous markets as soon as this week.

Here JPM notes that while its market depth metrics for 10y UST futures and cash bonds have deteriorated, they still appear well above levels during March 2020 and this is true for both the 5y and 10yr tenor. And, as JPM claims, without further deterioration in UST liquidity it would be difficult to envisage a Fed intervention a la March 2020, especially if one views the recent bond selloff as a function of investors embracing the reflation trade. At the same time, Fed Chair Powell and Governor Brainard are scheduled to speak next week, and it will be important to watch for signs of how it views the bond market correction.

B) CTAs and other momentum traders hit oversold levels as mean reversion signals kick in. This, JPM writes, would provide at least some temporary relief (and it sure would especially if Nomura is right that the CTA shorting has now reversed). But back to JPM’s own calculations, the bank asks how far are we from oversold conditions on our momentum traders framework? The sell-off in 10y USTs to close just above 1.5% on Feb 25th has seen the bank’s shorter-term momentum signal for 10y USTs reach extreme bearish territory at -1.7 standard deviations, below even its early 2018 low of -1.5 standard deviations. The average of the shorter and longer-term signals reached a level of -0.8, still some way from its early 2018 low of – 1.2 standard deviations, but it would only take a further extension of the sell-off for 10y yields to 1.6% for this to reach its early 2018 low, while for the average of the shorter-term and longer-term signals to reach its 2018 low would take a further sell-off of just 5bp to around -0.2%.

Long story short, JPM agrees with Nomura that at 10y maturities, it appears the shorter-term signals for USTs have reached levels where mean reversion or profit taking signals by CTAs should  start kicking in, while the average of shorter-term and longer-term signals are approaching those levels. That said, while there are signs that the shorter-term signal for 10y USTs and Bunds reaching extreme levels has triggered some CTAs to reduce short duration exposure, for the signals to more decisively reach oversold conditions for CTAs could take 10y UST yields reaching 1.6% and for 5y to reach 1.0%. This means that more yield momentum chasing higher could be in store in the coming days.

C) Japanese and Euro area investors step in to buy USTs to take advantage of the large yield pickup on a currency hedge basis relative to their domestic bonds. As the chart below shows, the recent TSY sell-off has seen the attractiveness of US Treasury yields rise on a currency-hedged basis, particularly for Japanese investors, and yet the probability of this flow materializing at current levels of UST vol is low as these investors and in particular banks tend to be averse to high levels of rate volatility.

Before these investors step in, JPM suggests that first other flows or central bank actions are need to materialize first to induce a decline in volatility.

D) Finally, rebalancing flows by balanced mutual funds and/or pension funds would help bond markets to stabilize and bond yields to subside. Unlike foreign flows, the chance of these flows materializing is high during the current quarter according to JPM, though the timing is harder to predict and could happen. In the event it materializes more towards the end rather the beginning of March, it could create a flow vacuum for rate markets over the next two weeks. One potential risk: if and when these rebalancing flows emerge, they are unlikely to be supportive of equities, as they combine bond buying with equity selling.

Putting it all together, when thinking about the above four scenarios JPM finds that the conditions needed for this week’s market stress – which is reminiscent of the previous positive bond-equity correlation episode of Q4 2018 – to subside “may not yet be fully in place” which is a surprisingly bearish assessment, especially if as Nomura (correctly) observes, the CTA unwind of shorts has already begun and the next stop is likely to be 1.20%. Of the four scenarios, Panigirtzoglou concludes that there are some signs at least of the second starting to take shape as shorter-term momentum signals for 10y reached oversold conditions. In any event, if urgent stabilization is required and does not emerge, dragging equities lower, BofA will be right and the Fed will have to address the ongoing liquidation wave… although what the Fed will say is unclear.

After all, as we said earlier, the Fed is in a very big bind – the reason we have the current tantrum is precisely due to the massive liquidity injections from central banks who have been desperate for more inflation. Well, they have their inflation and to reverse it they plan to do what – inject even more liquidity? At some point even our broken markets will have to concede that what is going on is complete and terminal idiocy.