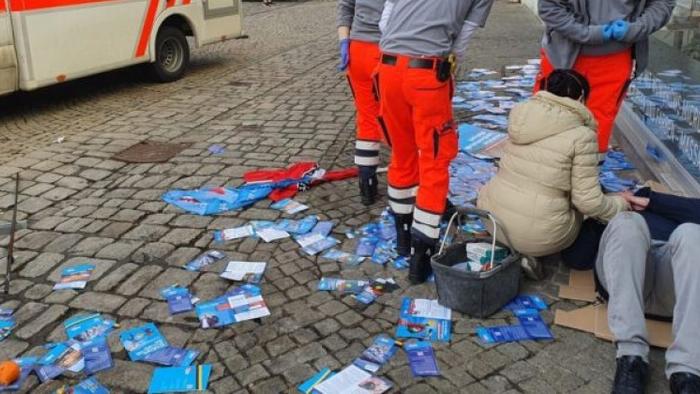 Far-left extremists in Germany viciously attacked a populist political candidate who was campaigning for this year’s regional election on the street.

Alternative for Germany (AfD) candidate Stephan Schwarz was left hospitalized following the beating, which took place in the town of Schorndorf over the weekend.

According to the city prosecutor, Schwarz was manning an information booth when he was approached by around 15-20 individuals carrying Antifa flags and banners.

36-year-old Schwarz was dragged to the ground and beaten by the mob before having his mobile phone stolen as he attempted to call the police.

Schwarz was subsequently taken to a local hospital where he was diagnosed with a concussion.

“Police later arrested five people in connection with the incident, three outside the town’s railway station and two others on a pedestrian footbridge,” reports Breitbart.

“All five are said to be between the ages of 18 and 25 and are currently under investigation by the Stuttgart public prosecutor’s office.”

“Violence must never be a means of political debate: I am dismayed and appalled by the violent attack on the AfD candidate for the Landtag, Stephan Schwarz, and the destruction of the AfD’s information stand at today’s Schorndorf weekly market,” said Schorndorf Mayor Matthias Klopfer.

As we previously highlighted, Antifa extremists threatened to assassinate an AfD member of parliament, even naming the exact date on which they would kill her.

MP Frank Magnitz was also brutally attacked by left-wing radicals, with Antifa later claiming credit for what some observers suggested was an assassination attempt.