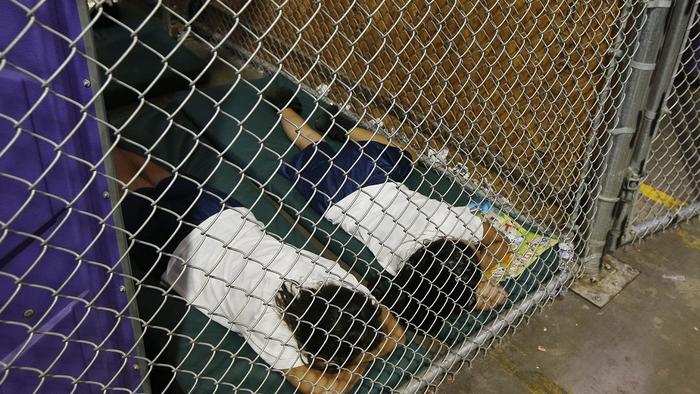 
Thousands of migrant children face ‘the cages’ built by the Obama-Biden administration, after the child-shelter network run by the Department of Health and Human Services (HHS) reduced its capacity by 40%, leaving them 93% full.

Once the HHS shelters reach capacity, migrants will be housed in facilities run by the Border Patrol – a.k.a. ‘the cages,’ described by the Wall Street Journal as “stark cells – with just a bench and a toilet – that are designed to hold single adults for a few hours rather than children for days.”

Over 700 children were in Border Patrol custody as of Friday, up from 150 on Tuesday, according to the report, which cites “a person familiar with the numbers.”

“A jail cell is no place for a child, even for the shortest possible duration,” said former US Customs and Border Protection spokesman, Andrew Meehan, who served during 2019.

“They’ve seen very large growth in a very short period of time,” said Mark Greenberg, a senior fellow at the Migration Policy Institute, a nonpartisan Washington think tank, who was in charge of the HHS shelter network during the Obama administration. “The closer you get to 100% capacity, the harder the system is to manage.”

On Monday, the government plans to reopen an emergency shelter in Carrizo Springs, Texas—a converted encampment that once hosted oil-field workers—to house 700 additional children. That facility, which opened in 2019 to manage the surge of children, and other emergency shelters had come under criticism from Democrats, in part because they didn’t follow standards governing care at permanent government shelters.

Unaccompanied children enjoy unique protections under immigration law that forbid the government from quickly deporting them. They are required to be sent to HHS shelters, where the government cares for them until they can find a suitable sponsor, typically a family member or family friend living in the U.S. –Wall Street Journal

According to the report, the flood of migrants is likely because of “sagging economies and gang violence in Central America, exacerbated by the pandemic and a pair of hurricanes last year which hit the region.”

It could also be the brand new US president that’s promised a ‘pathway to citizenship’ and just started letting migrants enter the United States while they await their immigration hearings they’re sure to attend.

“If we were not in the middle of a pandemic, we wouldn’t be facing the situation that we are in right now,” said one HHS official.

In November, government shelters began filling up with migrants after a federal court ordered the Trump administration to halt the practice of sending children back to their home countries without an adult – while the Biden administration has opted to continue housing them while they apply for asylum, despite an appellate decision overturning the lower court’s November decision.

Biden has also halted the practice of sending children back to their country of origin if they were traveling with an adult who isn’t their parent – a policy which sends more children to HHS shelters.

“It’s certainly not ideal,” said Jennifer Podkul, vice president for policy and advocacy at Kids in Need of Defense, an immigrant advocacy organization. “But for now, it’s better than having kids remain in [border patrol] custody.”