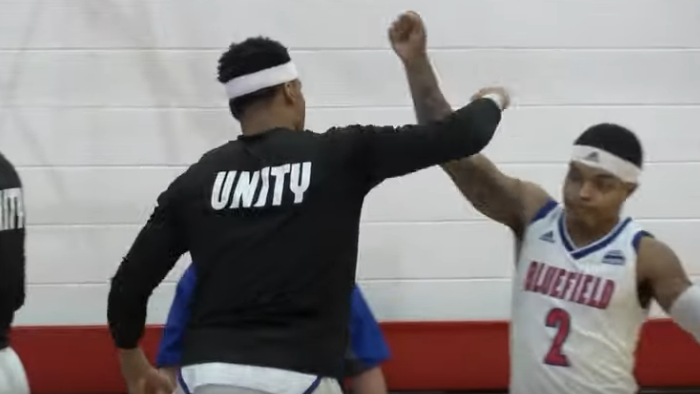 
A Virginia college was forced to forfeit a men’s basketball game after several players were suspended for kneeling during the national anthem before games in January and February.

Bluefield College president David Olive says he warned players about kneeling before games several times before the suspension, which caused the team to forfeit last Thursday’s game against Reinhardt, according to Sports Illustrated.

“The basis for my decision stemmed from my own awareness of how kneeling is perceived by some in our country, and I did not think a number of our alumni, friends and donors of the college would view the act of kneeling during the anthem in a positive way,” Olive said, adding that he spoke with players, coaches and the school’s athletic director, Tonia Walker, about the issue.

He [Olive] said he wasn’t initially aware of the players’ decision to kneel but learned on Feb. 1 that players had done it at Bluefield’s previous home game. Olive added that he later became aware of players kneeling in two prior road games. After learning of the players’ actions, Olive told head coach Richard Morgan that it “would not be allowed going forward.” –Sports Illustrated

One Bluefield player, Jewels Gray, told ESPN that the team was told they could kneel in protest, and that they were told not to release personal statements or speak with the media about the subject.

“Why would our school contradict what they said?” Gray asked ESPN. “We had meetings before the season with [the athletic director] and the president, and they stated that we can kneel and they’d support and be behind us, 100%.”

Today I stood up for what I believe in and I peacefully protested social injustice during my football practice. Colored inequality has occurred on my college campus and within my community against student athletes recently and that’s wrong.
I hope I have twitters support ✊🏽✊🏾✊🏿 pic.twitter.com/FrayzzrAH3

According to Olive, Bluefield players simply chose to ignore his order, which led to the team being held in the locker room during the national anthem during a Feb. 4 game.

“I further told them that their intended message in bringing awareness of racial injustices was being diluted or completely lost because some saw their act of kneeling as being disrespectful to the flag, our country, and to our veterans,” said Olive in a statement. “In my opinion, their message was not being heard.”

“There will be consequences for the actions of the players,” Olive told coach Morgan.

Now let’s see if consequences go both ways once the woke mob is activated.