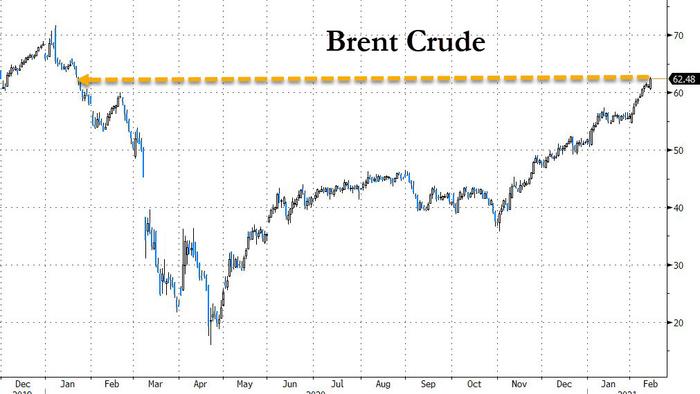 
Just days after one of our favorite macro strategists, Dylan Grice, predicted that the stage is set for “a bull market in oil“, and JPM quant Marko Kolanovic said a new oil and commodity supercycle has begun, oil is starting to get the message, and has jumped more than 2% on Friday…

… rising to the highest intraday level in more than a year as output curbs from top producers whittle down global inventories, while JPM predicts that an epic systematic short squeeze is about to be unleashed next month in oil (we discussed this earlier this week, and will touch on this shortly again).

Oil was set for a second straight weekly gain, as OPEC+ continued to slash output and the group expects a stronger second half of the year, which to Bloomberg indicates “that global inventories will face sharp declines unless the cartel boosts supply.” Indeed, Iraq said OPEC+ is unlikely to change its output policy at a March meeting. Meanwhile, in the U.S., crude stockpiles are at the lowest in nearly a year.

As a result of the rally, WTI futures’ 14-day Relative Strength Index (RSI) rose to the most overbought since 1999 this week and remains above 70 in a sign that the commodity may be due for a pullback, which however has yet to come.

“Based on fundamental analysis, the case for further price gains is hard to make, although we are seeing optimism in financial markets in general,” said Hans van Cleef, senior energy economist at ABN Amro. “We think that much higher oil prices are not sustainable and that oil producers will then start to increase production.”

Maybe… but maybe they are. Skepticism aside, a recent bullish trade reco by Goldman was validated as Brent prompt timespreads widened in a bullish backwardation structure, helping to unwind bloated stockpiles held in onshore tanks and on ships. The nearest timespread traded as strong as 55 cents a barrel, while swaps tied to the North Sea physical market flipped from a discount to a premium.

Meanwhile, concerns about global demand remain with the Covid-19 pandemic crimping fuel consumption from China to the U.S. On Thursday the IEA again cut its demand forecast for 2021, describing the market as fragile. However, oil has recovered from the depths of the pandemic (after briefly trading as negative as -$43/bbl on April 20).

That said, a recovery from the pandemic could lead to outsized gains in oil: according to BofA, oil demand could rise at the fastest pace since the 1970s over the next three years, which could send oil prices soaring.

“Inflation fears are increasing rapidly and there is a historic amount of capital filtering through global financial markets due to all of the stimulus programs,” Ryan Fitzmaurice, commodities strategist at Rabobank, said in a note. Large inflows into the space “speak to the fact that investors want to own commodities at the moment and are willing to overlook some of the weaker fundamental inputs to focus on the bigger picture at hand.”

Finally, let’s not forget that for the Fed the oil price surge is music to their ear for the simple reason that one of the biggest drivers of 10Y breakevens…

If the Fed really wants higher inflation it should buy crude oil futures. They correlate 1.000 with breakevens and will reprice inflation expectations overnight. It’s already buying shale bonds why not go all the way.

And if there is one thing the Fed wants more than anything, is to create the impression that inflation is about to overheat, forcing Americans to start spending. It might be working: earlier today the latest UMich report found that 1-Year inflation expectations surged to the highest level since 2014…