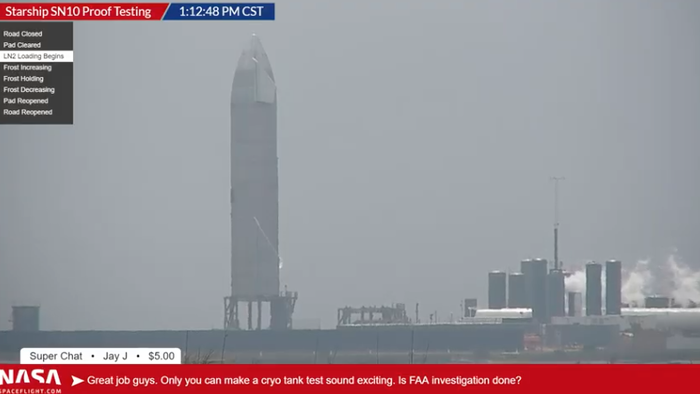 
Preparations for SpaceX’s Starship SN10’s test were conducted over the weekend. There are indications SN10 could be ready for a test as soon as this afternoon.

NASASpaceFlight.com said three Raptor engines were installed on SN10. The Starship will be tasked with replicating SN8 and SN9 flights that have both crashed.

“SpaceX will conduct Space Flight Activities on February 8, 2021, from 9:00 am to 6:00 pm. Approximately 10 minutes prior to the activity, you will be provided notice by the sounding of a police siren. There may be more than one instance during that time period where you will hear a siren notification.”

Last week, SN9 launched on a 6.2 miles journey into the atmosphere but failed to stick the landing, erupting into a giant fireball on the launch pad.

“SpaceX is set to test the Starship SN10 prototype on Monday at the Boca Chica launch facility. The exact details for the round of testing have not been confirmed, but it will likely be a cryogenic proof test,” NASASpaceFlight.com said.