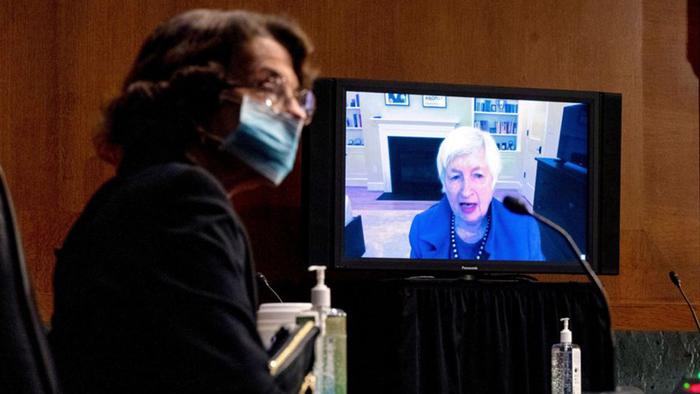 
Amid her 114 pages of written follow-up responses to her Senate confirmation hearing, Treasury Secretary-designate Janet Yellen touched on various topics spanning from climate change to sanctions policy and moves to maintain the dollar’s status as the world’s main reserve currency, telling lawmakers that she will work with President Joe Biden to get countries to refrain from currency manipulation.

“The president has committed to opposing efforts by countries to artificially manipulate their currencies to gain an unfair trade advantage. I am supportive of that commitment and, if confirmed, will work in coordination with the administration to oppose any such efforts,” Yellen said in a document obtained by Bloomberg News.

In her hearing, Yellen was pressed on whether Biden, who has said he will reverse much of the 2017 tax cuts, would stick to his pledge not to raise taxes on households earning less than $400,000 a year. Yellen, in the written responses, promised to “work with members of Congress” to address this question.

Yellen dodged the question whether a repeal of the cap on state and local tax deductions, as proposed by Biden, would deliver a big tax cut to wealthy Americans while doing next to nothing for those in the bottom half of income distribution. Instead, as in the hearing, she stressed the importance of assessing the impact of the move not on households, but on state and local governments.

But, as Bloomberg notes, she was more direct in responding to criticism of Biden’s plan to reduce the threshold for the federal estate tax, saying “about the wealthiest six out of every thousand estates would face any tax” under the plan.

Yellen was more talkative in her remarks on China, reiterating that there will be no immediate lifting of tariffs on China and that the Biden administration will be monitoring China’s adherence to pledged made in the Trump administration’s “phase one” bilateral trade deal.

Asked if the federal government has a responsibility to compete with these foreign countries, including China, to support reshoring manufacturing capabilities for critical industries, she said that “the Biden administration will engage in a whole-of-government approach to China that uses our available tools in a manner that is designed to achieve our economic, national security, and foreign policy goals. U.S. efforts to maintain its technological and innovation edge, including in sensitive “dual-use” technologies, must focus on reshoring critical supply chains. If confirmed, ensuring that the United States is able to compete in the global economy will be a top priority.”

In connection to that, Yellen also said that President Biden will review all aspects of the Trump Administration’s trade policies toward China, “including how completely Beijing has lived up to the terms of the Phase One Agreement negotiated with the Trump administration. As part of his review, the President will consult with allies to galvanize collective pressure on China and support American workers and businesses.”

Yellen also addressed whether the US should keep Trump’s Section 301 tariffs on China:

President Biden has said that we will review the tariffs on China and consult with our allies and will not be making changes until we do both of these things. The Biden Administration will make use of the full array of tools to counter China’s abusive economic practices and hold Beijing accountable.

Yellen also pointed out that whereas the US approach to date has focused on a unilateral approach — and, as a result, “could have been more effective”, going forward, “we should strive to meet this important challenge by building a united front of U.S. allies and partners, including through multilateral institutions, to confront China’s abusive behaviors.”

Other topics discussed include:

Yellen’s full responses are below:

Bitcoin Bear Market Bottom Is At $24k! Here’s What Comes Next For BTC!