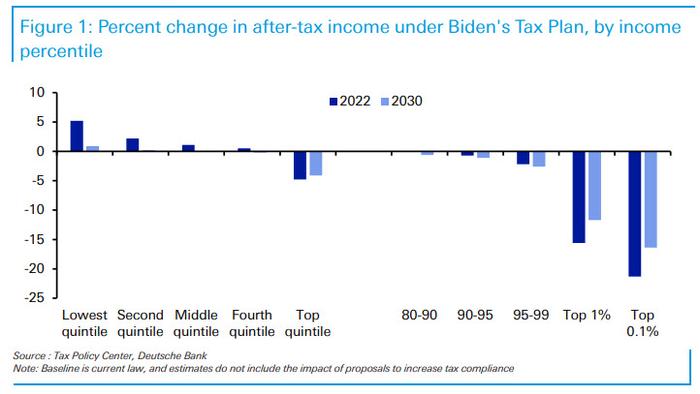 
While the market has so far focused exclusively on the temporary economic sugar high that the Biden fiscal stimulus will unleash on the US economy, which however may be far below Biden’s bogey of $1.9 trillion with Goldman now expecting just $1.1 trillion being enacted due to republican opposition, traders are starting to focus on the cost side of the “cost-benefit” analysis.

And, as Deutsche Bank’s Jim Reid writes, while “for now it’s all about the size of the stimulus juices flowing into the economy” the pips will likely be squeezed later in the year as the Democrats craft broader infrastructure and tax legislation.

That’s why today’s Chart of the Day from Reid shows the distributional impact of Biden’s pre-election tax plan, according to the Tax Policy Center.

At the moment, economists see a joint infrastructure and tax reform bill being passed in late 2021; at that point revenue rises will potentially offset half of the extra spending, although maybe only raising a quarter of the revenue estimated by the tax plan that today’s chart was based on.  This is based on the political realities of a split senate and the then looming mid-terms.

In short: the chart shows whose income group will benefit, and which will end up with the tax bill, after Biden’s record stimulus is enacted.