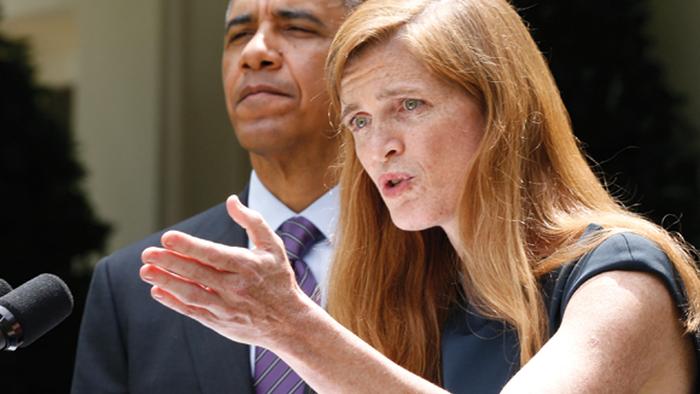 On Wednesday, Joe Biden announced that he will nominate Samantha Power to head the US Agency for International Development (USAID).

Power served as ambassador to the UN for President Obama from 2013 to 2017. Before that, she worked on Obama’s National Security Council, where she played an instrumental role in pushing for US intervention in Libya in 2011.

Power argued in favor of US intervention in Libya under the guise of protecting human rights and preventing genocide. She was joined in her crusade by then-Secretary of State Hilary Clinton and Susan Rice, who served as the UN ambassador at the time.

Reports from 2011 say the pressure from Power, Rice, and Clinton is what led Obama to intervene militarily in Libya, even though his other top advisors were against it. Then-Secretary of Defense Robert M. Gates would later say that in a “51 to 49” decision, Obama decided to bomb Libya.

The US-NATO intervention in Libya that led to the brutal murder of former Libyan ruler Moammar Gaddafi was an absolute disaster. Destabilizing Libya turned the country into a haven for al-Qaeda-linked militants, resulted in targeted killings of black Africans, sparked a refugee crisis in North Africa, and even led to the creation of slave markets.

For her efforts in convincing Obama to destroy Libya, Power was promoted. As the US ambassador to the UN, Power advocated for US intervention in Syria and stood by as the Obama administration backed the Saudis in their brutal war against Yemen’s Houthis.

While Powers has since taken a public stance against the war in Yemen, she omitted her early role in supporting the vicious war from her memoir that was published in 2019. In the book, Power defended her decision to intervene in Libya and argued that more intervention in Syria could have prevented some of the war’s atrocities.

While it’s not exactly a national security position, Power will have a lot of influence on foreign policy from her future role as the head of USAID.

The agency is often used to fund US regime change efforts. For example, in September 2019, USAID announced it would be providing $52 million to Juan Guaido, who the US recognizes as president of Venezuela, despite the fact that Nicolas Maduro holds the office. Earlier in 2019, the US supported Guaido in a failed coup attempt.