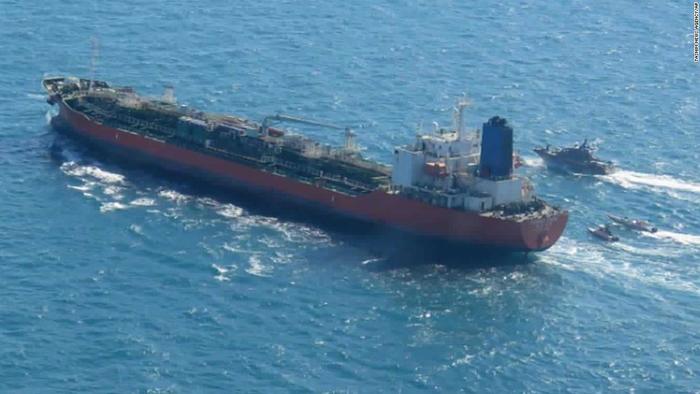 
South Korea has summoned the Iranian ambassador to condemn the Monday seizure of a South Korean-flagged chemical tanker and its crew in the Persian Gulf. Seoul is demanding its immediate release and has dispatched a delegation to Iran to negotiate, following the military already sending an anti-piracy unit to the region.

Iran ostensibly offered the reason for the MT Hankuk Chemi’s detention and “inspection” as environmental violations – a concocted reason it has used in past tanker detentions. The 20-member crew is now said to be in Iranian custody.

However, Iran is now denying that it’s holding the mostly South Korean crew as hostages after the IRGC Navy diverted the vessel near the Strait of Hormuz. This despite Iranian state media publishing footage of IRGC commandos preparing to board the vessel.

Footage taken from a Helicopter earlier today of the South Korean tanker seized by #Iran
pic.twitter.com/FIA0xj5bbW

As we noted earlier, at the same moment the tanker seizure made international headlines Monday, Iran pressed Seoul over the some $7 billion in assets frozen in South Korean banks due to US-led sanctions.

Iranian government spokesman Ali Rabiei appeared to confirm the drastic action was linked to the asset seizure, telling a press conference on Tuesday that, “We’ve become used to such allegations,” while crucially adding:

“But if there is any hostage-taking, it is Korea’s government that is holding $7 billion, which belongs to us, hostage on baseless grounds.”

Also looming large in the background is that Joe Biden enters the White House in two weeks.

The owner of the MT Hankuk Chemi tells AP that #IRGC forces stormed the tanker and forced the ship to change course and travel to #Iran. MFA is also deflecting as usual this morning, calling #SouthKorea the real hostage taker.https://t.co/AUb5y6fN8Q

Much of this aggressive maneuvering, especially the Monday declaration by the Islamic Republic to start enriching uranium up to 20% – which puts the country a huge step closer to nuclear grade levels – appears toward gaining leverage going into renewed talks with the US about restoring the terms of the JCPOA nuclear deal, which Biden has vowed to put back into place.