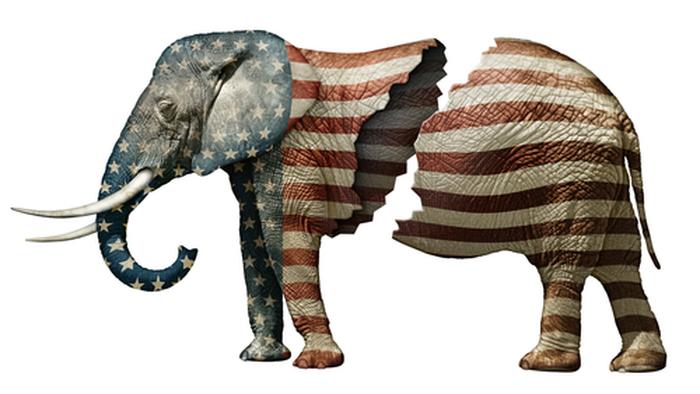 
Authored by Martin Armstrong via ArmstrongEconomics.com,

The Republican Party will not “split” apart like the Democrats…

The Democratic split is different. That is a party of highly diverse beliefs. You have the middle-of-the-road Democrats who want Pelosi gone. She represents to them the radical California contingent – as the call it. There are members in the Democratic Party who would toast if California split and say good riddance. There is the Communist contingent intermixed with the Socialists hiding within the Democrats. Alexandria Ocasio-Cortez is a member of the Democratic Socialists of America (DSA) which is a socialist and labor-oriented party with a diverse range of ideas but it is the Socialist Party of America (SPA) renamed and incorporated in the Democrats much like the Tea Party was inside the Republicans. Then you have various ethnic groups, women’s groups, and the LGBT or GLBT which stands for the lesbian, gay, bisexual, and transgender groups. All of these groups share only a common bond of hating Republicans. Beyond that, they disagree on just about everything else from the environment to taxation.

What the Republicans fail to recognize is that Trump has even beaten Obama as the most admired president in the Gallup Polls. He expanded the party and they got the largest share of black and Hispanic votes in history.

Trump did more for the middle class and the working man than any other president. He expanded the economy and black unemployment reached its lowest in history.

“Trumpism”, if you want to call it that, did not begin with Trump. It really began with the Tea Party most recently which forced Speaker John Boehner out because he could not deliver the Republican vote. This “Trumpism” will not end with being driven out of office.

This has been a major coup but by the Democrats, Republicans, and the Deep State. They all wanted a non-politician out.

I wrote back in 2017: “There is a very REAL plot to overthrow Trump led by the political establishment and aided by the mainstream press.” All I heard from my sources was that they thought Trump won because the media focused on him ignoring all other Republicans in an attempt to pave the way for Hillary. They never expected Trump to win and that set in motion the media hatred of Trump for they believe he was their mistake – CNN especially. Right now, not even Fox News supports Trump. They too are making a very serious mistake. Go back to 2017 and you will find Lindsey Graham smashing his phone and disliked Trump immensely. Then he started to warm up to Trump.

This “Trumpism” is not entirely confined to the Republican Party. It offers something of tremendous value to the growing level of discontent that the Democrats and world leaders look down on as “populism”. The lesson Republicans have failed to grasp is that the people did not vote for Trump because he is such a tremendous guy. They voted for Trump in 2016 because they hated everyone else in Washington. Both the Democrats and Republicans are fools. They think getting rid of Trump will get everything back to normal – I won’t tell on you and you don’t tell on me, and we all get rich!

But Trump had tremendous support outside the USA for the very same reason. They saw him as standing against their own corrupt governments. It is an anti-establishment sentiment and Trump just happened to be at the right place at the right time.

The political class, worldwide, saw Trump as a threat and recognized that “populism” was growing and how to stop it was debated at the World Economic Forum with the result to end voting because the people are too stupid.

The overthrow of Trump will only solidify that “Trumpism” which is growing within the nation and the world. The appeal of socialism always presented by Democrats, liberals, progressives, is far less than the view that Washington is just too corrupt. The Gallup Poll of 2 years ago had Congress still above car salesmen. In the new December 17, 2020 poll, Congress is now officially the worst career in ethics and trustworthiness.

They defeated Trump with corruption, but they confirmed they are the worst people on the planet. I reported back in 2019 that 35% of Americans believe the government is the problem according to a Gallup Poll. What they have done to Trump and as soon as the people realize that what the Democrats will do is nothing that they promised, this number will test the 50% level.

One of the reasons the conservative Democrats want Pelosi gone is they view that she had disgraced the nation when she tore up Trump’s State of the Union speech. Even the Gallup Poll shows that the respect for those in the House is the lowest. Senators are more respected than a Congressman…

The Democrats succeeded in getting votes not for a policy, but by getting people to hate Trump as a person. It may have been a brilliant strategy, but they did not attack the reason people voted for Trump from the start. Trumpism is a philosophy that is not really nationalism, but America first. It is something more like a group that sees themselves as disenfranchised for they are not the influential rich bankers nor the left-wing socialists who expect the government to take care of them like Santa Claus. They are the silent majority that politicians have lied to and look down upon for a very long time.

Trumpism is not really new. It has been a growing philosophy of distrust and discontent which over the course of years has manifested a bipartisan populist undercurrent that stretches back through Pat Buchanan, Ross Perot, Barry Goldwater, George Wallace, Huey Long, William Jennings Bryan, and even Andrew Jackson – the people against the establishment. The London FT did a piece on “populism” and how all the politicians were frightened that they could be thrown out after Trump won in 2016.

As the FT said, populism “horrified” the global political elite because they feared losing power! They hate democracy for why should these uneducated stupid people be able to vote them out of office – God forbid!

John Kerry has come out against “populism” which is Trumpism. Kerry is 100% on board with DAVOS and Agenda 2030.

“Normal was a crisis; normal wasn’t working,” said former US secretary of state John Kerry in his opening remarks.

“We must not think of it in terms of pushing a button and going back to the way things were. We’re a long way off from being able to go back to any kind of normal.”

The responsibility will lie with governments, the “great convener”, Kerry said.

“Forces and pressures that were pushing us into crisis over the social contract are now exacerbated,” he said. “The world is coming apart, dangerously, in terms of global institutions and leadership.”

“What we never did was adequately address the social contract, the franchisement of human beings around the world, to be able to participate in things they can see with their smartphones everywhere but can’t participate in.”

Explaining that the United States of America is currently “gridlocked”, Kerry said: “This is a big moment. The World Economic Forum – the CEO capacity of the Forum – is really going to have to play a front and centre role in refining the Great Reset to deal with climate change and inequity – all of which is being laid bare as a consequence of COVID-19.”

They think they defeated Trump, and they will steer the Great Unwashed morons (us) to the promised land where they eliminate the right to vote so never again do they have to risk their careers with a non-politician in charge.

There are rumblings that among this despised group of populists who were stupid enough to vote for Trump, are the overwhelming truckers who the Democrats hate because they contribute to Global Warming driving their trucks around instead of delivering things on bicycles or by horse and buggy. The truckers are very pissed off on all levels and they deeply resent Washington and the endless corruption. The talk is that they are considering a strike for a month or so which will bring all food deliveries to a halt and most other things right down to new cars. The image of truckers among the Democrats is dirty, disgusting, uneducated, racist good old boys.

A Biden victory may end up as a Pyrrhic Victory. They may stall his Agenda 2030 being put in place by John Kerry probably to his own dismay. Their idea of ending fossil fuels and meat production is just off the wall. The radical left sees it as their object to force the rest of society to comply with their demands. This is so against the idea of a free democratic society it will only provoke internal war.

They are already surrounding Biden with people are for the swamp as usual. And as for the claims that Trump pardon criminals, let us put that record straight. Those people were prosecuted ONLY because they supported Trump. McCain, Hillary, and Biden all took money from foreign governments, and never is anyone prosecuted. They were all political prosecutions under selective prosecution which is part of the entire corruption game.

The Republican Party will not “split” apart like the Democrats. The factions are just black and white as opposed to the multicolored Democrats of many factions. But the populist element which once supported the Republicans will move to a new 3rd Party. In this, we will see even conservative Democrats join its ranks. What both parties forget is that “populism” is We the People – not the aristocratic political class.