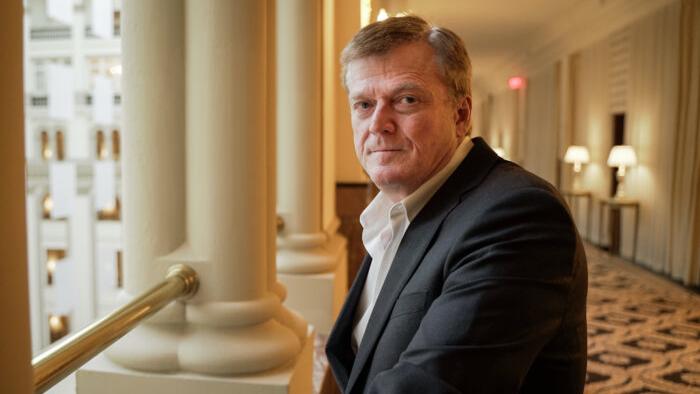 
Authored by Li Hai via The Epoch Times,

Patrick Byrne, founder and former CEO of Overstock, said that China is “taking us out from within” during an interview with Dr. Jerome Corsi on Monday.

“The greatest way to fight a war, in the Chinese way of thinking, is not to have to fight at all. That’s what they’ve done here,” Byrne said.

Byrne studied Chinese history at Beijing Normal University from 1983 to 1984. He has a Bachelor of Arts in Chinese studies from Dartmouth College.

“Though we spend a trillion dollars a year between our military and our intelligence, national security circles … that trillion dollars we have and we’ve built, you know, things that can stop all their planes and their missiles and all kinds of things. But we missed the one they use, which is not a fight at all, not firing a bullet or missile at all, but taking us out from within. And that’s what’s going on.”

Byrne pointed out that the Chinese regime is engaged in “a slow coup.”

“It’s a revolution. The stages of such a revolution are very well mapped out. We understand this. It’s demoralization, disorientation, crisis, then normalization: those four steps.”

“The demoralization is what happened this year with COVID,” Byrne continued.

“The disorientation is this kookiness we’ve been seeing for about six months,” Byrne said, referring to Antifa, the Black Lives Matter movement, and other things, such as buildings and police stations being lit on fire, and people being harassed for their political views while out dining.

“That’s all to disorient you. It’s to tell you, ‘You are not living in the America you thought you were living in,’” he said.

“The crisis is, clearly an imposter president has been stood up,” Byrne added in reference to the contested election results.

He asserted that Beijing only needed to secure six counties to steal the election.

“Political scientists can tell you, to steal the United States you don’t need to cheat in elections everywhere. You need six counties where you cheat the heck out of those counties. And you can flip the six states that they are in and thereby flip the Electoral College and steal the country.”

Paramilitary police officers wearing masks march next to the entrance of the Forbidden City in Beijing on Sept. 20, 2020. (Nicolas Asfouri/AFP via Getty Images)

Byrne mentioned an election irregularity in Atlanta, Georgia, where a water main break was reported, and poll observers and media were told to leave. However, four people stayed and kept counting the ballots.

The water leak “was actually a urinal that had overflowed,” according to the chief investigator of the issue.

The last phase is normalization, Byrne said, in which the “media is just beating it into your head.”

“They’re violating every precept of journalistic integrity,” Byrne said, criticizing the media for ignoring the evidence that has been presented claiming election fraud.

Byrne pointed out that thousands of people risked their lives to testify in affidavits, telling of the fraud and irregularities they witnessed.

“So those are the four stages we’re going through, and it’s my assertion that the hand of China is behind this.”

Byrne made it clear that he loves Chinese people and Chinese history, but the Chinese regime “has proven to be as treacherous and ungrateful as anyone could have imagined.”

“What the Chinese did is they studied us, and they saw that corruption is our weakest point. And they infiltrated us, and they corrupted exactly institutions that they needed to corrupt in order to allow what’s going on now to happen.”

“In 10 years, there’ll be prison camps with organs being harvested just as there are in western China,” Byrne went on to say.

“So we cannot bend a knee to this under any circumstance.”

The Chinese regime has been killing Falun Gong practitioners for their organs for more than 20 years, according to a panel of experts who attended a virtual conference hosted by the advocacy group Doctors Against Forced Organ Harvesting (DAFOH) on Nov. 19, and independent investigations.

Talking about the upcoming Jan. 6 rally in Washington, Byrne said that “this is your last chance.”

“If you bend the knee to this rigged election, they have corrupted the most elementary concept of our tradition, consent of the governed, and you never will get another chance.”

Byrne studied the Constitution’s principles when he was young. He has a master’s degree from Cambridge University as a Marshall Scholar and received his doctorate in political philosophy from Stanford University. He indicated that the “core atomic concept” in the United States’ liberal tradition is the consent of the governed, which is determined by free, fair, and transparent elections.

“We do not bend the knee. This is what makes us different. And all over the world, there are people looking to us, hoping we show that we are the exceptional country. This is our chance.”