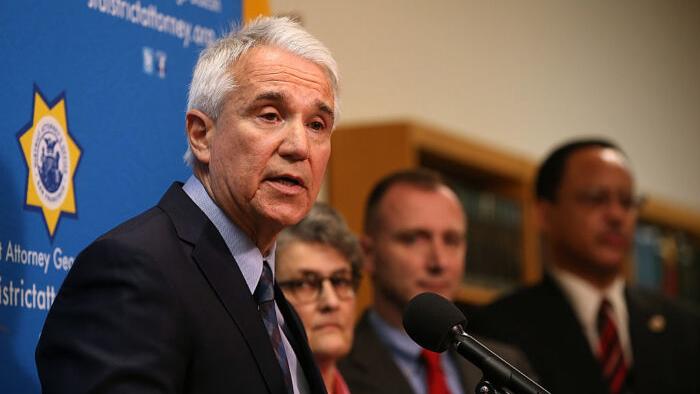 His office issued a brief reply to The Epoch Times denying that Trujillo offered a backdoor deal in the case of Rudy Dominguez.

Chris Karr reports that Dominguez is an admitted 18th Street gang member who is charged with the murder of 26-year-old Fernando Rojo Jr., attempted murder of five others, and six counts of discharging a firearm from a vehicle.

In hearing the case on Dec. 15 and Dec. 28, Judge Mark S. Arnold criticized and defied Gascón’s reforms, which would provide leniency in sentencing for Dominguez.

During the Dec. 15 hearing, Dominguez’s defense attorney Traci Blackburn also said Trujillo had offered a backdoor deal that would give the defendant a seven-year sentence. He was otherwise looking at the possibility of life without parole.

Blackburn said, according to a hearing transcript obtained by The Epoch Times, that the offer “was conveyed to me.” Arnold asked “From who?”

“I believe it was Mario Trujillo,” Jefferey Herring, the prosecutor, said.

“I’ve also been told from a separate set of supervisors there is no offer, and that’s why we’re in a conundrum today.”

Blackburn then confirmed the offer came from Trujillo. The matter would be picked back up at the Dec. 28 hearing. At the Dec. 15 hearing, Arnold began his defiance of Gascón’s controversial reform banning most enhancements, which are additional charges or penalties based on the gravity of the crime or the defendant’s criminal history.

Judge Pushes Back on Reforms

Herring said at the hearing enhancements should not be allowed in Dominguez’s case “in the interest of justice.”

“And the interest of justice is met how?” Arnold asked.

At that point, Arnold initiated a dialogue with the victim’s four family members who were present.

“What do you think about eliminating all of these allegations that Mr. Herring’s office is looking to eliminate?” he asked America Rojo, the sister of the deceased.

“I just feel that we need justice,” America Rojo said. “It’s just not fair that he—if he doesn’t get as much years.”

“It’s not fair that they would lower many years … because somebody who is doing harm to people, they should pay,” she said.

After hearing from the family, the court cited 1975’s People vs. Orin to define what “the interest of justice” means, concluding that, “if courts terminated prosecutions of crimes or enhancements … without adequate reason, it would frustrate the orderly and effective operation of our criminal justice procedure as envisioned by the legislature.”

Despite the court’s denial, when the case resumed on Dec. 28, the prosecution asked for permission to “put specific language on the record,” according to the hearing transcript.

Then, Herring read from a script Gascón issued on Dec. 15 to deputy district attorneys, a portion of which states, “It is the position of this office that [these laws] are unconstitutional … [they] provide no deterrent effect or public safety benefit of incapacitation—in fact, the opposite may be true, wasting critical financial state and local resources.”

After the reading, Arnold said, “This is something you’re reading. These are not your words.”

He proceeded to explain why sections of the script the prosecution read did not apply to Dominguez’s case.

Arnold asked if this reading represented a second attempt to dismiss enhancements, the prosecution said yes, and the court denied the motion for a second time.

“[The motion] does not rise, in any way, shape, or form, to the level of in the interest of justice,” Arnold said.

Arnold went on to say he was “puzzled” by the revelation from the previous hearing that an offer of seven years had been made.

At that point, Larry Droeger, head deputy of the Hardcore Gang Division, explained to the court that there is a longstanding, engrained protocol whenever official offers are obtained. He said that this protocol—which he clarified in detail—was apparently ignored in this case.

“There’s a reason why we follow that procedure,” Droeger said. “The reason is to ensure against improper influence or bias in the decision-making process. It’s also so that we have a uniform and fair application of our policies towards all similar situated defendants.”

He added: “If [Trujillo made an offer], I don’t know under what authority he did that.”

“It’s a good thing,” Arnold said, adding that such an offer should not exist given the circumstances.

“Because there’s no way I could look at myself in the mirror and … live with a plea bargain of seven years on this case. … There’s no way I would have accepted that, based on my knowledge of this case.”

Sam Dordulian, who represented the surviving members of the Rojo family at the hearing, sought to have the DA’s office recused from the case due to a conflict of interest.

He pointed out that the seven-year offer – which, by Blackburn’s admission on Dec. 15, was facilitated by deputy public defender Tiffany Blackwell – represented a conflict of interest because Blackwell is part of Gascón’s transition team and a member of his policy committee.

“The whole purpose of the chain of command that the court just heard is to avoid the specific thing that happened in this case,” Dordulian argued.

“[It’s] to avoid people like Mario Trujillo [going] through the back door [to] give a special offer to Ms. Blacknell, who was the public defender on this specific case, a sweetheart deal that just could not be justified by the facts of the case.”

The court maintained that so long as the seven-year offer was off the table, no conflict of interest existed. Therefore, Dordulian’s request was denied.

“[The] bottom line is they tried to get away quietly with a backdoor, unethical, and improper deal [with] Ms. Blacknell’s client and they got caught,” Dordulian told The Epoch Times via email.

“Thankfully it never materialized, but certainly not for a lack of trying on the part of Mario Trujillo, who was willing to let a gangbanger murderer walk the streets after one man was killed and another injured by a bullet after a few short years.”

“This is the new face of justice in Los Angeles under George Gascón’s policies.”

The next hearing date is Jan. 27. The trial will commence within 60 days from that date.

But the situation gets worse as The Epoch Times’ Chris Karr reports that  The Association of Deputy District Attorneys (ADDA) for Los Angeles County has filed a civil lawsuit alleging that new policies enacted by Gascón violate California state law and place prosecutors in an impossible position.

“Do we follow our legal and ethical responsibilities and risk getting disciplined, even fired, by our new boss?” ADDA Vice President Eric Siddall said in a statement.

“Or do we follow his policy directives and risk losing our California State Bar Cards and, by extension, our ability to practice law anywhere in the state?”

The suit, filed Dec. 30, argues that Gascón’s directives overstep his executive duty to enforce the law. Specifically, ADDA takes issues with the DA’s Dec. 7 directive prohibiting prosecutors from filing enhancements, which are additional charges or penalties based on the gravity of a crime or the defendant’s criminal history.

In a Dec. 30 statement, Gascón reiterated the same perspective he has expressed on several occasions.

“I have spent my life ensuring those who pose a threat to our community are held accountable and kept away from the rest of us,” he wrote.

“During those years, enhancements and strike allegations have never been shown to enhance our safety. In fact, studies have shown excessive sentences exacerbate recidivism and create more victims in the future.”

He added: “After a summer of unrest, Los Angeles County voters embraced this new, modern approach. The will of the voters must not be mistaken as a commentary on the hundreds of Deputy DAs who labor, day in and day out, to protect the public. … As we’ve seen in recent weeks, this new approach will take some fine-tuning and a tolerance for change.

“Despite today’s legal challenge, I believe a collaborative path exists to achieve these goals based on what research shows, what voters want, and what LA County deserves.”

ADDA holds that a blanket prohibition on enhancements is impracticable and must be based on individual circumstances. The DDAs allege Gascón has essentially taken on the role of a legislative body.

They are seeking a restraining order to prevent Gascón from “putting his personally-held views as to which laws are or are not good policy … above the laws enacted by the state legislature and by the voters,” according to a Dec. 30 ADDA statement.

“While an elected District Attorney has wide discretion in determining what charges to pursue in an individual case, that discretion does not authorize him or her to violate the law or to direct attorneys representing the district attorney’s office to violate the law,” Michele Hanisee, president of the ADDA, said in the statement.

Meanwhile, a trio of legal experts from Northern California released a joint statement criticizing the lawsuit and standing behind Gascón.

“We are confident this attempt to obstruct the will of the voters will be struck down,” said Erwin Chemerinsky, dean of the University of California–Berkeley Law School; David Mills, a professor at Stanford Law School; and Michael Romano, director of Stanford Law School’s Three Strikes Project.

The statement says the California Supreme Court has held that “California district attorneys ‘are given complete authority to enforce the state criminal law in their counties.’”

It says the ADDA is being inconsistent because for decades it has remained silent while former DAs “often dismissed enhancements and Three Strikes allegations in the interests of justice.” the Three Strikes law gives defendants a sentence of 25 years to life if convicted of three violent or severe felonies.

“That the Association now claims the practice to be unlawful is more reflective of their longstanding opposition to reform and the will of millions of Angelenos than it is the legality of DA Gascón’s directives,” it states.

“DA Gascón’s policies will enhance health and safety in Los Angeles and begin a much needed process to reduce epidemic levels of mass incarceration.”

Some victims’ families have spoken out against Gascón’s reforms, which give leniency to those who committed crimes against their loved ones. They say enhancements should continue to be allowed, applying additional penalties for suspects whose crimes are especially heinous or who have a serious criminal history.

Former Los Angeles DA Steve Cooley is among Gascón vocal critics. He called Gascón’s reforms unconstitutional and unethical in an interview with The Epoch Times in December.

“They’ve taken an ideology and they’re forcing it onto a system of laws,” Cooley said.

The DDAs have spoken out against not only the reforms, but also Gascón’s methods of applying them. He has directed DDAs to read out scripts in any case where enhancements may be applied.

A portion of the script reads, “It is the position of this office that [these laws] are unconstitutional … [they] provide no deterrent effect or public safety benefit of incapacitation—in fact, the opposite may be true, wasting critical financial state and local resources.”

DDAs have also said they are being monitored and intimidated.

Gascón has not responded to The Epoch Times’ inquiries on these matters.

Kyle Bass: Fed Will Start Cutting In 2023 After US Enters Recession Later This Year

Puberty Starts Earlier Than It Used To. No One Knows Why.