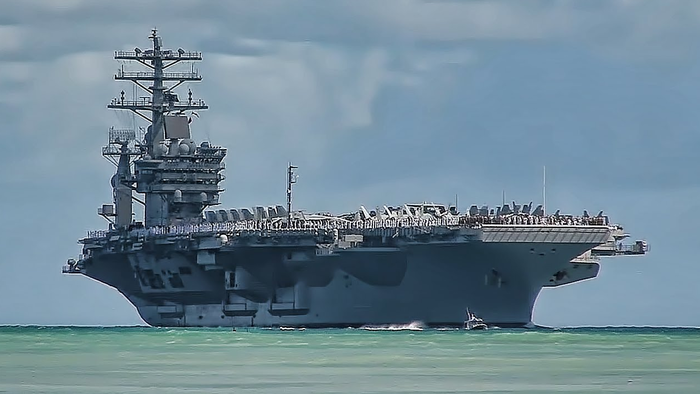 
In a first hopeful sign of potential US de-escalation in the Persian Gulf, where there’s been a recent build-up of US forces as threats continue to be exchanged between Washington and Tehran, the Pentagon has announced it is bringing its only supercarrier in the gulf home.

The AP reports of the sensitive timing, “The decision, announced Thursday by the acting secretary of defense, Christopher Miller, came one day after Air Force B-52 bombers flew nonstop from the United States to the Persian Gulf in a show of force that military officials said was intended to caution Iran against carrying out attacks against U.S. forces or interests.”

The Mideast and Gulf region constitute the USS Nimitz’s normal area of operation over much of the past year. It’s now being sent “home” to its US West coast base.

Just last week the US also provocatively sailed the USS Georgia nuclear submarine through the Strait of Hormuz – something American defense officials actually made public, in order to send a clear “message” to Iran.

And this week a pair of B-52 bombers were flown direct from their base in North Dakota in non-stop roundtrip over the Persian Gulf as a deterrence message.

This comes at a moment the defense establishment and elements within the Trump administration are said to be split over their estimations on the degree to which Iran is actually preparing a ‘retaliation’ attack related to the Jan.3rd one year anniversary of the death of IRGC Quds Force commander Qassem Soleimani.

As the AP explains: “Sending the aircraft carrier, the USS Nimitz, home to the U.S. West Coast would seem at odds with the idea that a show of force is needed to deter Iran. This might reflect a split within the defense establishment on whether Iran poses a heightened threat to strike in the waning days of the Trump administration.“

Miller’s Thursday announcement made no reference to Iran despite a slew of threatening language coming out of the State Department, and in particular prior warnings issued by Pompeo himself.