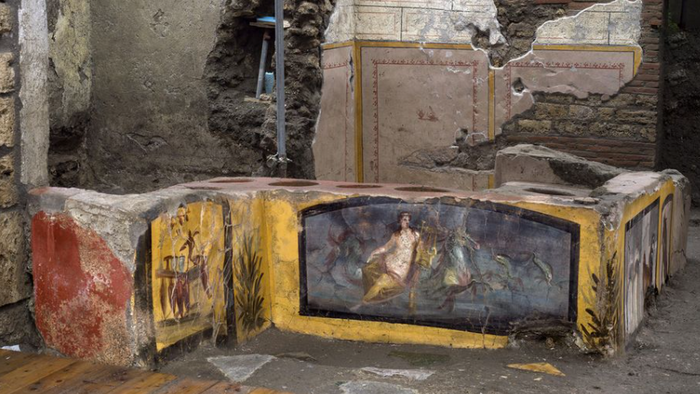 The elegant snack bar counter, known as a “thermopolium,” which is Latin for a commercial space where hot food is sold, was discovered in the archaeological park’s Regio V area.

According to Reuters, the area is off-limits to the public and was inaugurated over the weekend.

A volcanic eruption in 79 AD buried the city in volcanic ash, freezing much of it time.

Archaeologists found duck, pig, goat, fish, and snail bone fragments in specialty made pots. Some pots included food that was cooked together like a Roman-era paella. Crushed fava beans were found at the bottom of one jar.

The unearthing of the thermopolium is an incredible find and offers a view into the vibrant colors used in commercial settings 2,000 years ago. The fact that most of the food stand is intact makes the discovery even more impressive.

“As well as being another insight into the daily life at Pompeii, the possibilities for study of this Thermopolium are exceptional, because for the first time an area of this type has been excavated in its entirety, and it has been possible to carry out all the analyses that today’s technology permits,” Massimo Osanna, interim director generation of the Archaeological Park of Pompeii, said in a statement.

Osanna said additional tests of the food found at the stand “are expected to yield exceptional data for informing an understanding of what was sold and what the diet was like.”

The unearthing of the food stand provides a rare glimpse of what life was like 2,000 years ago.